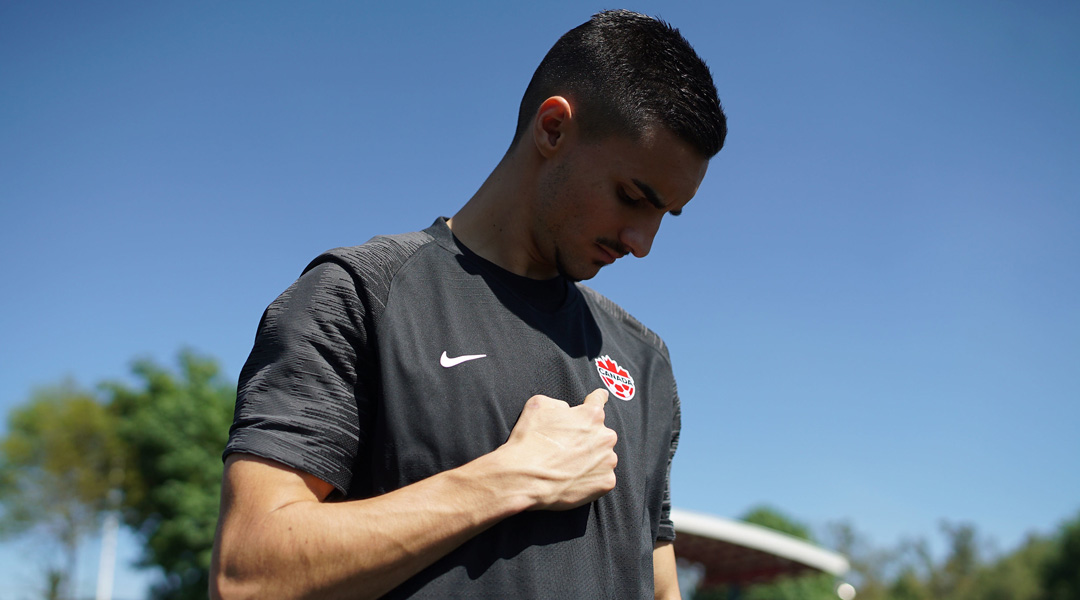 How Stephen Eustaquio’s Pledge To Canada Came To Be

Longtime fans of the Canadian national team will remember years of the country’s veritable ‘dark ages’, where home matches were a rarity, ‘unattached FC’ was a frequent sight for players on the squad, and many dual nationality players opted to pursue their chances on the national stage elsewhere.

In fact, Halifax Wanderers head coach Stephen Hart – who was once the country’s head coach – describes that the CSA couldn’t even afford him the luxury of a full-time assistant coach during his tenure, where players on the national team had to take a pay cut in order to play more games – and Canada didn’t ultimately end up playing a lot in those days.

In the last few years, the CSA has taken massive strides to rid itself of those memories. With a new generation of talent headlined by the likes of Alphonso Davies and Jonathan David, talented players are eager to step up to bat for Les Rouges. The team is now supported by full-time, dedicated staff members, and the future is looking bright.


Back in February, former Portugal U-21 Stephen Eustaquio – the brother of Cavalry FC’s own Mauro Eustaquio – committed to the Canadian national team. A dual citizen of both Portugal and Canada, Stephen’s pledge showed a marked difference to the days when the likes of Owen Hargreaves or Teal Bunbury turned down the maple leaf to play elsewhere on the national stage.

Shortly after Stephen arrived to Liga MX side Cruz Azul from Portuguese club G.D. Chaves earlier this year, the 22-year-old midfielder suffered a knee injury that has kept him off the pitch. Ahead of this week’s Al Classico matchup, independent journalist Thomas Nef spoke with Stephen’s brother Mauro, who revealed that the Cruz Azul player is nearing his recovery and might be available ahead of Canada’s important CONCACAF Nations League matches against the USA:

Hopefully. He’s been working extremely hard to get back to his level. He actually started training with Cruz Azul this week. He’s still pretty much non-contact, but I think hopefully in the next week or so he’ll be full contact and then it’s just one of those things, you know, he needs games, he needs minutes, he needs to get back to his rhythm. He’s a great player, if he wasn’t he wouldn’t be where he’s at.

When Stephen pledged to play for the Canadian national team back in February, the announcement came as a pleasant surprise for Canadian fans. While it may have come out of left field for the majority, behind the scenes it was the product of long-term relationship building from John Herdman, who had routinely been in contact with the youngster in an effort to get him to represent Canada.

When asked about how the decision came to be, Mauro was happy to talk about his brother’s passion for his country:

Everything we really do between me, my brother, and my family, we’re super close, the four of us. We talk about everything we do professionally and kind of take hints to what we think is right or wrong. He came up with the discussion at home. He’s like, listen, I want to part of something big. There’s the World Cup in Canada, and I want to be part of that. Right off the bat, he was really excited about it. Coach John Herdman talked to him a couple months before, they always really kept in touch, so that was nice and he felt like John really wanted him on the squad. When a player feels that, it’s good. It’s good to be part of something special. He was born here, right? So my brother has love for the country. It’s a country that’s good for him, it’s good for my parents, it’s good for me. It’s something that he takes real pride in, and he’s really excited to help Canada to take that next step.

After CONCACAF restructured its 2022 World Cup qualification system in a manner that massively hinders Canada’s path to the fabled competition, John Herdman got the country off to a solid start with two expected wins over Cuba (including a 6-0 routing at BMO Field) in the past week. With Panama suffering an unexpected fall to Bermuda, there’s a somewhat clearer path for Canada to break into the Hex following some good results – with the caveat that these good results need to come against the USA, a side which has historically gotten the better of its northern neighbours.

While it remains to be seen if Stephen Eustaquio recovers in time to see any action for Les Rouges in 2019, it’s clear that both he and Herdman are intent to have him play a role as Canada fights for World Cup qualification, and it’s great to see that the player has already spent time thinking about the 2026 World Cup in Canada, too. There’s a long way to go before then, but evidently the building blocks have already begun to be put in place.


His older brother Mauro plies his trade for Cavalry FC in the Canadian Premier League, and has spent the last few years of his career in North America, with stints for the Ottawa Fury, FC Edmonton, and Penn FC. He’s open to a return to Europe, though the 26-year-old says he’s happy to continue playing in Canada. He’d been a part of the Canada U-23 team, but never broke through with the senior side.

The Canadian Premier League has seen a rise in international recognition of late, with goalkeepers Marco Carducci and Quillan Roberts called up to represent Canada and Guyana respectively, while York9 FC midfielder Ryan Telfer recently made his debut for Trinidad and Tobago, scoring a goal in his second match for The Soca Warriors.