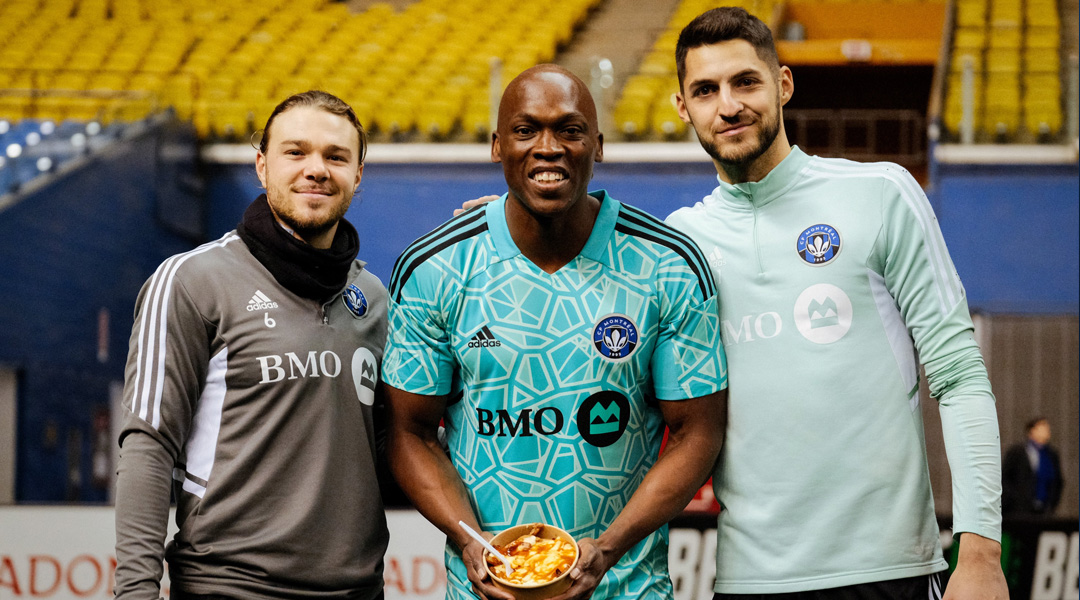 Well, that’s something, isn’t it?

In the show, the actor plays a goalkeeper who hails from Montreal, which is the actor’s actual hometown. As the show progresses, Moe’s character Zoreaux – despite title character Ted Lasso never quite grasping the French pronunciation of his name – eventually rises to be AFC Richmond’s first choice goalkeeper.

While the actor doesn’t play soccer in real life, it’s neat to see CF Montreal have some fun with him during their preseason camp.

Jeudy-Lamour was fully-kitted up in goalkeeper garb during yesterday’s session, taking shots from Samuel Piette and getting some pointers from James Pantemis, both of whom were part of Canada’s squad at the FIFA Men’s World Cup. Afterwards, Jeudy-Lamour posed with them holding a poutine, because why not?

Poutine is actually something that Jeudy-Lamour’s character brings up in Ted Lasso, with the goalkeeper suggesting that AFC Richmond run a trick play he calls ‘Midnight Poutine’, which Coach Beard simply describes as being ‘super Canadian’.

Jeudy-Lamour had improvised the line, and now seems to have bagged a tasty lunch out of it.

With Ted Lasso proving to be a hefty success for Apple TV, Jeudy-Lamour also saw his character added in FIFA 23, where Zoreaux is rated 76 in the game’s rendition of AFC Richmond. That actually puts him ten points ahead of the virtual James Pantemis, though clearly it was the latter giving the pointers.

He wasn’t the only goalkeeper in camp trying to make an impression, however, with Jonathan Sirois keen to stamp out a spot on the first team roster.

While CF Montreal’s training camp has seen some early drama, it’s nice that Jeudy-Lamour’s visit can allow the team to have a little fun, too.