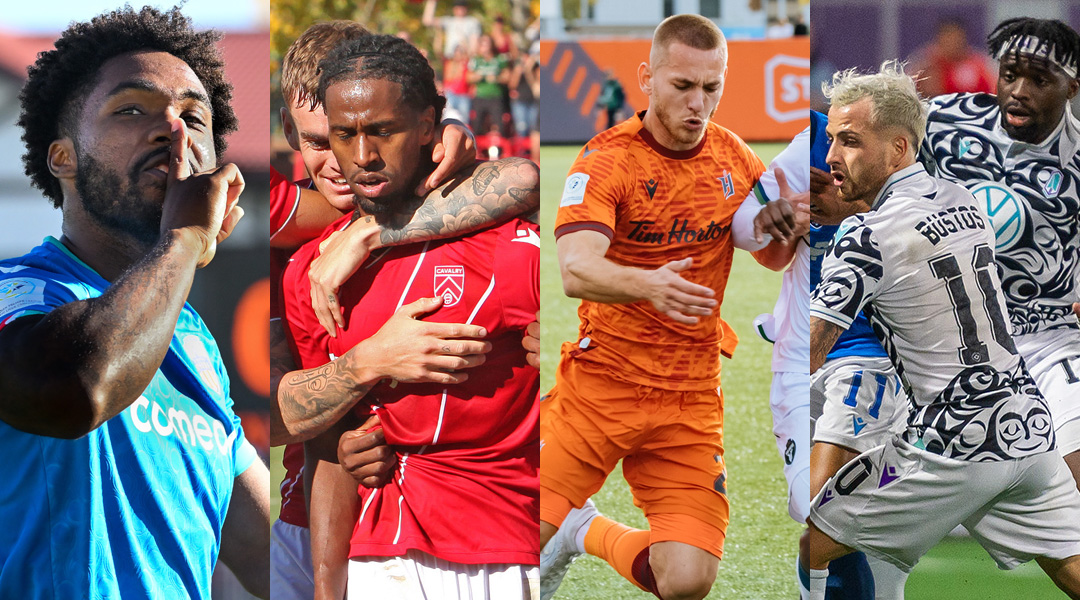 This past weekend saw three different Canadian Premier League teams lock in their playoff spots, confirming the top four teams who will advance to a postseason stage that kicks off in just 12 days.

With all the teams still having between 1-2 matches left to play of the regular season, however, the final positions of top half of the table have yet to be confirmed.

Here’s a look at the playoff-bound teams in order of their current spot on the table:

The Canadian Premier League’s first expansion club finds itself the midst of a dream season: after finishing bottom of the table last year, the club made some drastic roster changes and correctly banked on new head coach Carlos Gonzalez to lead the team to brighter pastures.

Ottawa has now not only qualified for playoffs for the first time ever, but currently tops the table and is a favourite to stay in the pole position. The defensive improvements have seen the side concede the second-least goals of any team, with its attack has proven much more proficient, too.

They’re now a team that knows how to grind out results, and that’ll be a crucial ability coming into their first-ever postseason. It’s a place that Ottawa’s rapturous and dedicated supporters deserve to be.

Perennial CPL Contender Cavalry FC locked in a playoff position this weekend after dispatching Valour 2-1, with Tommy Wheeldon Jr. now set to lead the team into its fourth consecutive postseason.

The rollercoaster campaign saw a slump of midseason form see the club lose six of eight matches in one run, but the team has since rallied back to prove why they’re known as a top domestic competitor. Cavalry also did well to regain its momentum after selling young players Victor Loturi and Aribim Pepple to Europe, with one of the best attacks in the league remaining solid with golden glove contender Marco Carducci once again proving strong at the back after overcoming a cancer diagnosis earlier this year.

The postseason hasn’t been kind to Cavalry, however: while they’ve qualified for this stage thrice previously, they’ve no silverware to show for it – at least, until the regular season champion trophy gets unveiled. That’s a nice historic gesture, but they’ll want to bring the North Star Shield to Spruce Meadows this year.

While Forge FC come in at third right now, there’s an outside chance they could still climb atop the table through their two-game homestand to close out the regular season. The two-time champions still remain a playoff favourite, especially after securing an astounding +22 goal differential thus far – the biggest out of any team.

Forge has outscored every team this year, they’ve had the best defense, and they’re played the most do-or-die big stage games out of any team in the league. Bobby’s tactical prowess from the sidelines has helped the club’s most consistent roster pioneer many paths for CPL clubs, including becoming the first Concacaf Champions League competitor earlier this year.

The reigning champions have officially survived a cold run near the tail end of the season: James Merriman has embraced an easy-on-eyes attacking mentality inherited from Pa-Modou Kah, with the west coast team looking strong in this year’s opening stage before momentum severely faltered following the sale of star striker Alejandro Diaz, who remains the league’s golden boot leader nearly two months after being sold to Norwegian club Sogdal Fotball.

Still, the Tridents were able to rally back to reach playoffs for the third straight season, prompting another year of heartbreak for Valour FC fans who have now missed playoffs by just one spot for two consecutive years. Pacific is a club that can beat anyone on their day, and they’ll go into playoffs feeling like they can grab back-to-back championships for retiring captain Jamar Dixon.

The two winners from this stage will then advance to the 2023 CPL Final on October 29, with the highest-seeded team earning the hosting rights.

The importance of the regular season finishing positions goes beyond playoff hosting rights, too: the league office recently announced a monetary award for the regular season champion, with a trophy set to be introduced next year – and that’s when a first-placed finish will start coming with a Concacaf Champions League berth, too.

The regular season will conclude in the coming weekend, and by that point we’ll know what the semi-final fixtures will be. While FC Edmonton was never truly in the running during the club’s fight for survival, it’s fair to say that Valour FC, York United, and the Halifax Wanderers will feel that things really could have gone differently.

With Atletico Ottawa securing its first-ever playoff position, there’ll be a breath of fresh air for the postseason stage of a league that enjoys a lot of parity. Who ultimately hoists the North Star Shield, of course, remains to be seen.