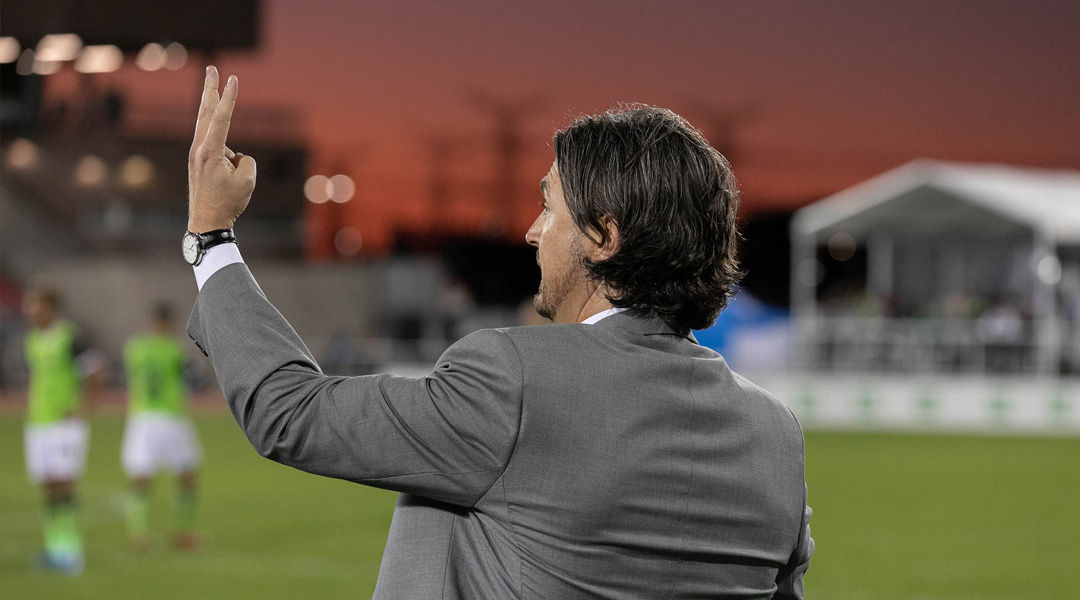 Cavalry FC gaffer Tommy Wheeldon Jr. had a lot to contend with Saturday night: with his side down to nine men after both Nathan Mavila and Jose Escalante were sent off, he had nine men on the pitch to contend with a York9 FC squad hungry to avoid handing the last open spot in the Canadian Premier League Championship to their local rivals.

In true Cavalry FC fashion, the spring season winners found a way to take the lead late in the game, though the Nine Stripes would equalize in the 96th minute. When asked about what it was like to play two men down after one of the league’s most-heated affairs, Tommy didn’t hold back with his criticism of the officiating crew after the eight-card thriller came to a conclusion, even stating that he was two men down against a three-man advantage.

I just don’t think he had the support from his assistant referees around him, I don’t think the’s made good decision. He made it about him. I would love to be up here saying ‘what a great football match that was, you know, York are playing for something’.  We want to win the fall season, we put out there as well. But no, we’re talking about the official and that shouldn’t be what this league is about.

Despite the drama that took place both on and off the pitch, Tommy Wheeldon Jr. was still able to make light of the situation with a few jokes in the post-match conference. When discussing the culture of Cavalry FC, he even jested that the media has now seen that the spring season winners can whip out a 3-4-1 when needed.


Tommy may not have been happy with how the referee handled the game, but when asked about Jose’s red card the Cavalry FC gaffer was understanding about why it was given:

The sending off of Escalante seemed to be the turning point of what was an already-testy match. If one had to pick a moment where the officiating crew perhaps lost control of the match, it would be there. To that end, Ryan Telfer offered his own perspective of Mavila’s first of two yellow cards:

You know, fair play to him, he was trying to win the ball. He knew he came in late, and he apologized, he knew he was in the wrong. The other part is I don’t appreciate all the other players coming at my face. It was me and Mavila, you know, we walked away from that. Escalante came into my face for no apparent reason and he left a hand on me, and the ref saw it, and it spiralled from there.

By the time the final whistle blew, spiraled would feel like an understatement: eight cards were doled out in all, with two Cavalry FC players and one member of the York9 FC coaching staff having been ejected in the second half. The hosts had equalized in the 96th minute of a game with five minutes of added time, something which Tommy described as ‘interesting’.

The match makes Cavalry FC the first Canadian Premier League club to finish a game with nine men. A draw would be a satisfying result for almost any team that loses two players in the span of seven minutes, though Tommy Wheeldon Jr. says his club likely would have won if the match hadn’t ended when it did.


Out of any of the league’s inaugural seven clubs, Cavalry FC has been the most consistent in terms of finding a way to win, regardless of the odds. During the post-game conference, Tommy broached in to the culture of Cavalry FC, describing the Calgary-based club as having a certain edge over the other teams – and not just because of the club’s PDL-based platform it built off of:

We’ve won a lot of close games more than others is because we do have an edge, like Nico said. I think sometimes all good teams have that, and sometimes it boils over today, or sometimes there’s a helping hand from someone who gives out more cards than Father Christmas.

CSA officials have come under heavy criticism from just about half of the league’s gaffers as the inaugural CPL season has progressed, with FC Edmonton head coach Jeff Paulus blasting them after dropping out of the Canadian Championship, and Valour FC’s Rob Gale jumping on to the subject just last week.

Jim Brennan opted to distance himself from such inflammatory statements, deflecting a question about the game’s officiating last night with a carefully-worded response:

You know, listen, guys – I’ve been around a while and I’m not getting caught up in that game, because I know there’s only one winner, and it’s not going to be me.

It’s not yet known of Cavalry FC will be fined for Tommy’s criticism of CSA officiating, or if either team will be fined for crowding the referee, which is something happened on multiple occasions as the match boiled over into a frustrating affair for both parties. The end result was one of the most dramatic games in CPL history, even if it wasn’t for the reasons either team would have wanted.


With York9 FC now eliminated from fall season contention, the squad will travel to Hamilton next Sunday to play against the the team who just booked the last spot in the two-leg CPL championship.

Meanwhile, Tommy Wheeldon Jr. will need to make some adjustments to adapt for his suspended players as his side hosts fourth-place Valour FC this Wednesday.