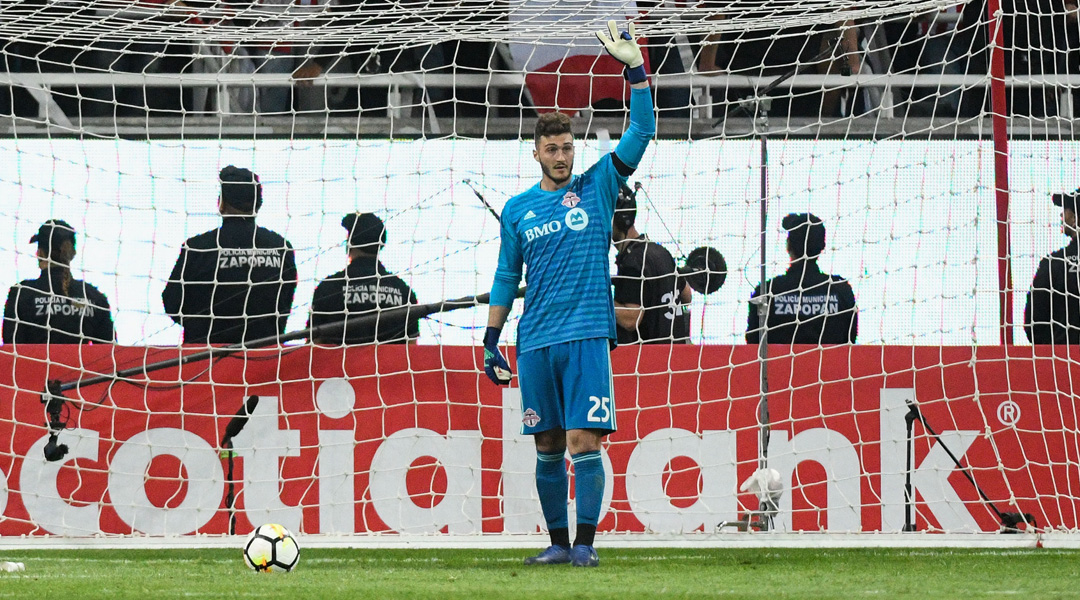 25-year-old Toronto FC goalkeeper Alex Bono has seen a lot of ups and downs in his career so far. After being drafted by the Reds in 2015, he bounced between the first team and the secondary squad several times before eventually earning himself a long-lasting starting spot in the TFC roster and regularly starting during the club’s treble-winning season in 2017.

After losing out in the 2018 CONCACAF Champions League final – on his birthday, no less – things haven’t exactly gone smoothly for Bono: a drop in form saw the 25-year-old goalkeeper allow plenty of goals throughout the following two seasons, with Quentin Westberg now replacing him as Toronto FC’s first choice.


For Bono, the Voyageurs Cup represents a golden opportunity to prove himself to Greg Vanney. The TFC gaffer promised Bono that he would start in each Voyageurs Cup bout, though with TFC getting a bye to the semi-finals, this will only be Bono’s fourth appearance since Westburg replaced him as the number one goalkeeper in early May.

While the reds were firmly in control over the the Ottawa Fury during the semi-finals, the club’s Montreal-based rivals have been a blip in Bono’s redemption arc. Still, even after the the Impact took the first leg 1-0 at Stade Saputo, the 25-year-old goalkeeper wasn’t shaken:

Tonight will be Bono’s 99th appearance for Toronto FC. It won’t be his first never-say-die experience with the Reds. He’s seen turnarounds take place against the Impact before, having been part of the travelling squad for Giovinco’s 95th minute 2017 Voyageurs Cup winner. Tonight, Vanney promises a faster tempo from his players, which means Bono and the TFC defensive line will need to be wary of quick counters from Montreal when TFC loses possession.


If Toronto FC can turn things around – which will almost certainly require keeping out the likes of Voyageurs Cup golden boot leader Ignacio Piatti out of the net and preventing an away goal – Bono and the squad will collect their fourth Voyageurs Cup title in a row. It’ll mean more Champions League action. More opportunities for Bono. He’s hungry for them.

We have to push, they’re going to sit back a little bit. They’re going to have to absorb a lot of pressure from us. That’s the dynamic of one team going into a second leg down. We know what to expect, we’ve seen them enough times in the league and in the cup already.

It doesn’t seem like that long ago that Bono was called up to the US national team to battle for a spot against Zach Steffen. Now firmly out of contention for such call-ups, Bono will want to use a solid Voyageurs Cup showing as a springboard to build from. Life can change quickly for MLS players, and with multiple expansion drafts on the horizon, he’ll want to be showing the world that he’s a capable keeper.


Whatever happens at BMO Field tonight remains to be seen, though Bono indicates that he’s ready to hold the fort between the sticks for TFC. With the Major League Soccer season winding down, Bono will be hoping to make his 100th appearance before the season’s end. After tonight, he’ll be tied with Stefan Frei for Toronto FC’s most-capped goalkeeper – and what better way to celebrate than a comeback victory against the club’s fiercest rivals?

Toronto FC will take on the Montreal Impact at 7:30PM. The match will stream exclusively on OneSoccer, who will provide both English and French commentary for the cup final.

Vanney on Canadian Championship Final: ‘We’ve Got To Go For It’