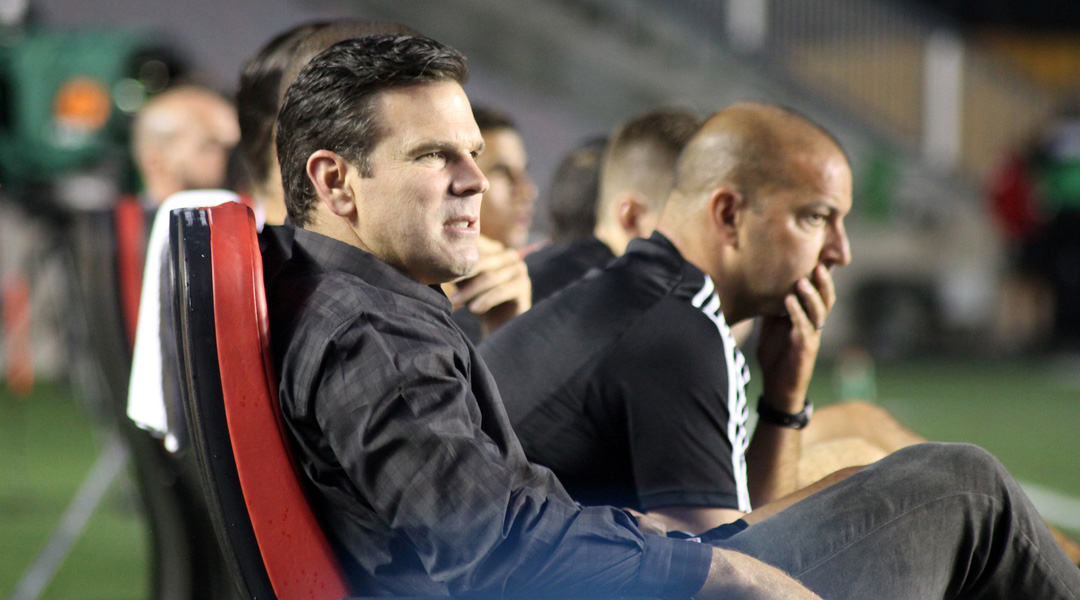 Vanney on Canadian Championship Final: ‘We’ve Got To Go For It’

Toronto FC head coach Greg Vanney spoke with media officials during a training session at Downsview Park ahead of the 2019 Voyageurs Cup final, where the home team will need to overcome a single goal deficit if it wants to win four Canadian Championships in a row. As things stand, the club’s fiercest rivals – the Montreal Impact – already have one hand on the trophy.

It was current Voyageurs Cup golden boot leader Ignacio Piatti who put the Impact in front during the first leg last Wednesday. Montreal opted to rest the injury-plagued attacker during an away trip to Los Angeles Galaxy this past weekend, where the club’s playoff run took a massive hit as they failed to pick up any points. Vanney indicated that the Montreal Impact may have ‘one half foot, if not a whole foot’ out the door in terms of playoffs, but said that it just means they’ll want to hold on to their lead in the Voyageurs Cup that much more.


In contrast, Toronto FC just secured its own spot in the playoffs following a 1-1 draw against western conference leaders LAFC. The likes of Jozy Altidore and Alejandro Pozuelo started for TFC, something which they hadn’t done last Wednesday in the first leg against Montreal. It was a choice that ultimately left the Reds with a lot to do a home:

It’s not ideal. We’d have liked to have picked up a road goal, just because a road goal at this point with us not having one plays such a factor. We’ve got to stay solid. We’ve had a lot of moments over the course of the season where we’ve almost had shutouts, and then in the final minutes we concede one. As a group, we’ve got to stay really focused on our defensive effort, protecting ourselves. I imagine they’ll come here blocking up and making it really difficult on us and trying to play off of the counter.

A propensity to concede late game goals has plagued Toronto FC over the course of the season, and it’s a problem which repeated itself just a few days ago: a Tsubasa Endoh goal almost gave the club three points, but Chris Mavinga conceded a penalty in the 95th minute that allowed Carlos Vela to equalize for LAFC.


For the second leg of the Canadian Championship, one can expect designated players Jozy Altidore and Alejandro Pozuelo to start, with Alex Bono confirmed to be retaining his starting spot for the domestic cup. Outside of them, Vanney has a healthy roster to work with: Gallardo and Morrow got a clean bill of health, with recent TAM signing Nicolas Benezet being touch-and-go before kickoff tomorrow. The rest, including exciting youngster Jacob Shaffelburg and Canadian Championship stalwart Jonathan Osorio, are ready to be called upon.

Regardless of who makes the starting eleven, fans can expect a much more attacking approach from Vanney as his club looks to overcome a one goal deficit in front of a home crowd at BMO Field:

Vanney knows that Toronto FC have to go for it, so it’s likely that Toronto FC will play an attacking game straight from the get-go. The storyline of Toronto versus Montreal is an absolute classic, though this year’s Voyageurs Cup could have branched out in other ways, too: with seven Canadian Premier League teams joining the competition, it’s the largest-ever Canadian Championship to date, with TFC captain Michael Bradley having hoped for a trip to Halifax instead of Ottawa in the semi-finals.


Toronto FC, as the previous cup winners, got a bye all the way to the semis. It’s not about how TFC got to the final, though: Vanney indicates it’s all about what happens on the pitch tomorrow.

We’ve gotta go for it on Wednesday. We’re down a goal, so we’ve either gotta get two or three, or so on and so forth. We’re going to have to attack a little bit.

Toronto FC will kick off against the Montreal Impact on Wednesday, September 25, at 7:30PM. The Canadian Championship final will stream exclusively on OneSoccer.