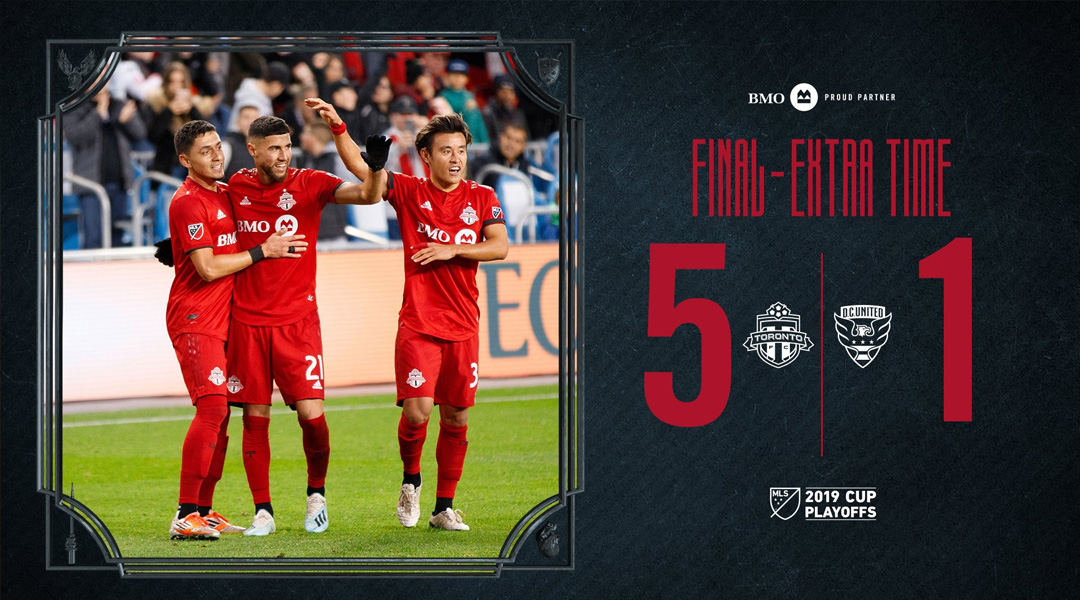 No Jozy Altidore or Omar Gonzalez? Apparently, that’s no problem for Toronto FC.

After finishing fourth place in Major League Soccer’s Eastern Conference, the reds secured a home match against DC United in 2019’s new single-leg format. The first half saw Toronto FC take an early lead through a Marky Delgado tap-in, with Toronto FC continuing to put on the pressure throughout the second half.

DC United fought back, with two Wayne Rooney chances finding their way straight into the mitts of Toronto FC shotstopper Quentin Westberg, who recorded some six saves across the match in all – and they weren’t small ones, either. Two minutes of added time away from a regular time victory, however, DC United forced extra time with a late set piece goal from Estudiantes loanee Lucas Rodriguez. The silence in the stadium following the goal was palpable.


While Toronto FC fans were loathe to slip up in the game’s final minutes and head to extra time, it treated them well: an absolute goal-rush from Toronto FC would see Toronto locals rise to the occasion. 24-year-old full-back Richie Laryea slotted home tidy shot just three minutes into extra time, with Jonathan Osorio tapping in a close-range finish to give his local team a two goal cushion just two minutes afterwards.

Things would go bad from worse for DC United, with Paul Arriola – who had a bad night at BMO last week during Canada’s 2-0 win over the USA – getting a red card for a rash challenge on Richie Layrea two minutes before the end of the match. Toronto FC fans went into the game uncertain if this would be Michael Bradley’s final foray as club captain, but instead, it ended up being a dismal end to Wayne Rooney’s time in Major League Soccer.


All four of Toronto FC’s extra time goals came within 14 minutes of eachother, continuing what has been a wild day of single-game elimination matches. Earlier in the day, a Jordan Morris hat trick helped Seattle to a 4-3 extra time victory over FC Dallas.

Toronto FC will now face NYCFC on October 23rd in the Eastern Conference semi-finals. With Mavinga hobbling off the match in extra time and Omar Gonzalez already missing the first playoff match of the year, Toronto FC fans will be hoping that both players recover in time for the away trip.