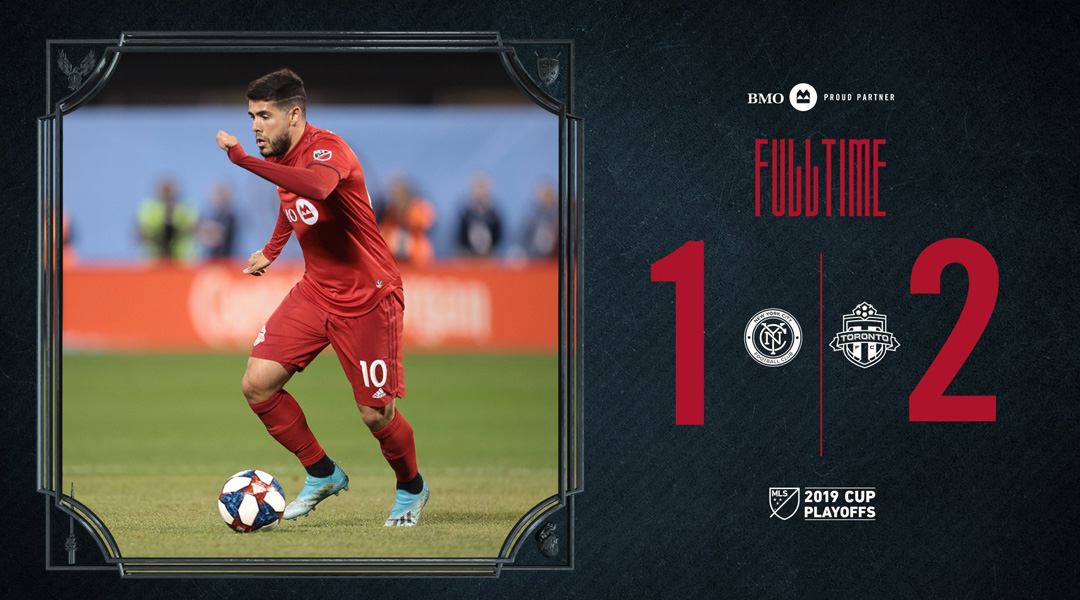 Toronto FC is headed for the Major League Soccer Eastern Conference Final courtesy of a familiar soundbite for fans of the reds: an audacious Pozuelo panenka.

Toronto FC traveled to Citi Field tonight to square off against New York City FC, who finished in the top spot of the eastern conference in the regular season. While television viewers may not have enjoyed the baseball netting in front of the pitch, the on-field action was nothing short of ferocious for the full ninety minutes.


With Jozy Altidore a notable absence for the second playoff game in a row, the Reds still started off strong away in Citi Field, calling Sean Johnson into action on a few occasions with the home side missing a great chance of its own. Just after half-time, a wayward backwards header from New York City FC defender Maxime Chanot gave Alejandro Pozuelo a freebie against the NYCFC shotstopper, gifting the travelling TFC fans something to cheer about in the 47th minute.

Showing exactly why its home form has led them to a first-place finish in the eastern regular season, however, NYCFC applied the pressure as the second half wore on, eventually switching over to an attacking diamond formation. It’s a strategy that was effective almost immediately, with Toronto FC struggling to keep possession of the ball and an absolute rocket from Valentin Castellanos going inches wide to deny NYCFC the equalizer.

The pressure would pay off eventually, with a long cross finding Ismael Tajouri completely unmarked. He buried a difficult shot beyond Quentin Westberg, with the raucous volume of the home crowd indicative of the sensation that the tide might just be turning.

However, it wasn’t to be: substitute Richie Laryea – who provided heroics in extra time against DC United last weekend – made a darting run in from the wing, drawing a foul and earning Toronto FC a penalty in the 87th minute.

Alejandro Pozuelo stepped up to take the spot kick, hitting an audacious panenka straight down the middle as Sean Johnson dived to the left. It was Pozuelo’s seventh penalty for Toronto FC, and the sixth that he’s scored. Cheekily, Pozuelo revealed after the game that he had decided to do a panenka when given the opportunity before the match had even started.

Toronto FC still had to hold firm against a string of late-game NYCFC corner kicks which saw goalkeeper Sean Johnson nearly provide an assist for a last-gasp NYCFC near miss moments before Toronto FC claimed the away win.


Speaking after the match, Toronto FC Captain Michael Bradley discussed a match which, while Toronto FC were able to carve out a win, certainly tested the mettle of the entire squad:

That’s a game where you needed a little bit of everything: some football, some skill, some composure, just great determination, mentality, that’s a big-time win.

The 2-1 away win means that Toronto FC has continued its perfect record when it comes to Eastern Conference semi-finals. The club will now face either Atlanta United or the Philadelphia Union, both of whom will face off against eachother tomorrow. As Toronto FC finished lower in the season than either of its potential eastern opponents, it will be travelling on the road once more as the away team for the conference final.

The Eastern Conference final is slated to take place on October 30, so it won’t overlap with the first leg of the Canadian Premier League finals which will get underway on October 26.