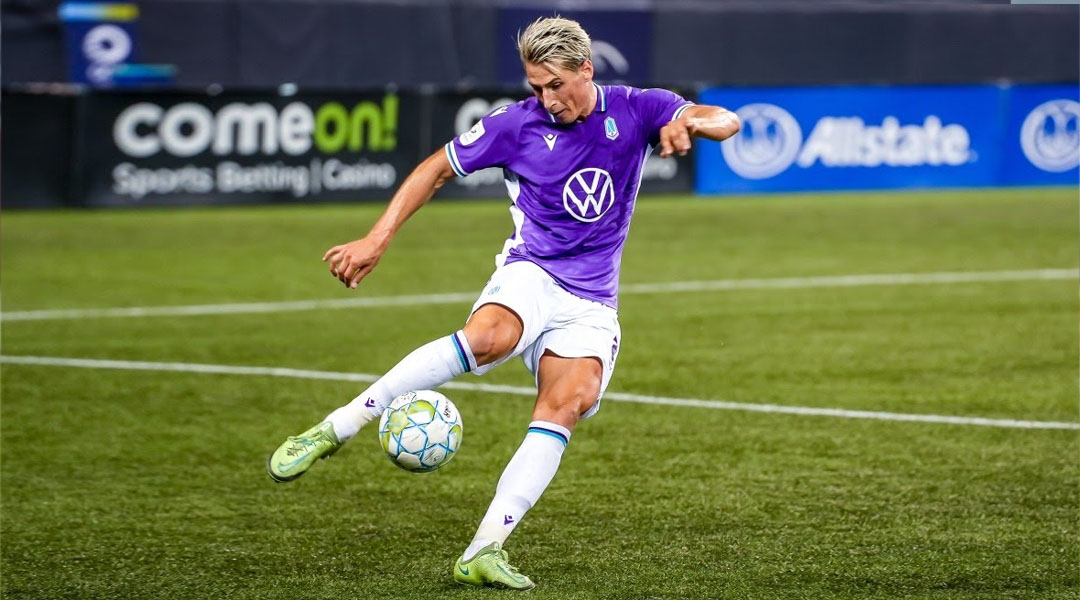 Northern Tribune has learned that the recent rumours about Toronto FC expressing interest in Lukas MacNaughton have legs.

Yesterday afternoon saw Transfermarkt break the news that the MLS side was interested in signing the six-foot-two centre-back, who is currently under contract with reigning CPL champions Pacific FC.

While the MLS side has already made contact with Pacific FC regarding the acquisition of the defender, sources state that discussions are still in the very early stages.

The six-foot-two centre-back is currently rated as the most valuable defender in the Canadian Premier League. He’s made 59 appearances for Pacific FC across his three seasons with the club, establishing himself as sharp defender with an eye for a good tackle, plenty of physicality, and great situational awareness on the pitch.

MacNaughton has long been championed by Pacific FC head coach Pa-Modou Kah as someone who he believes can play the MLS level, with the former Vancouver Whitecaps and Portland Timbers defender recently telling us as such in November:

For me when I look at him and having played in MLS myself, I see him as an MLS defender. I think the greatest reward for him as well as us as a club is for him to move to a higher level where he can test himself, because he truly deserves it and he is ready for that level. I think for myself, I would love to see somebody like him get into MLS.

Pacific FC has made it clear that they won’t step in the way of players pursuing opportunities at the higher level, though obviously the deal would have to work for them, too. Like several core players of the Pacific FC roster, MacNaughton signed a two-year deal last season and remains under contract for a further year.

While Transfermarkt states that both a direct transfer or a season-long loan are under consideration, it’s too earlier in negotiations to say what shape the potential Toronto FC acquisition could take.

MacNaughton also put in good individual showings against both Toronto FC and the Vancouver Whitecaps this year, with the defender featuring in every minute of the club’s semi-final reaching Canadian Championship campaign.

He then helped Pacific FC win its first-ever championship, qualifying the west coast side for continental action in the upcoming season.

Born in New York and raised in Brussels, MacNaughton returned to Canada for his university education and holds a Canadian passport. The 26-year-old has ambitions to play for the national team, telling Transfermarkt in an earlier interview that he believes he’d need to reach Major League Soccer heights to get such an opportunity.

With Toronto FC now showing genuine interest, the centre-back might just be able to reach those heights. If the move comes to fruition, he’d be the second player to experience a CPL-to-MLS move after CF Montreal’s Joel Waterman.

Last season saw TFC concede a league second-worst 66 goals in 34 matches, with new club boss Bob Bradley set to make several changes at the back. With Omar Gonzalez having left already and Richie Laryea expected to join Nottingham Forest in the near future, Bradley has brought in Shane O’Neill from Seattle with rumours of a potential Carlos Salcedo signing still swirling.

MacNaughton, should he arrive, will represent a budget-friendly defensive option for a head coach who saw plenty of success in a similar project with Mark-Anthony Kaye. With Kah backing him as an MLS-worthy player, it’ll be interesting to see what unfolds for the talented centre-back.