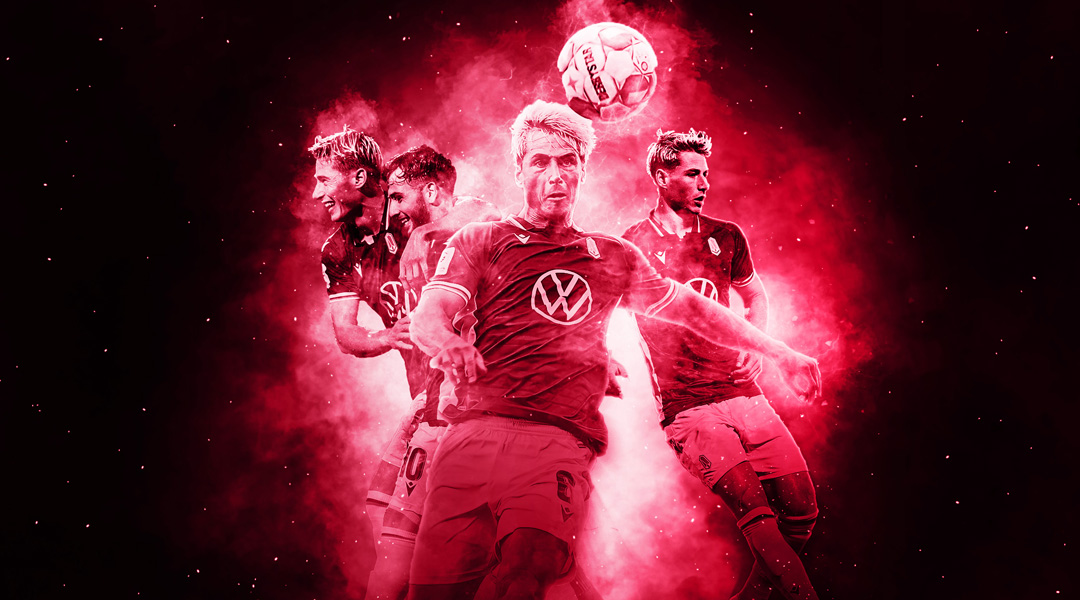 The most valuable centre-back in the Canadian Premier League has signed a two-year deal with Toronto FC that includes options for 2024 and 2025.

Pacific FC original Lukas MacNaughton is now set to begin a new chapter at BMO Field, though with preseason already underway in California he has yet to actually step foot in Toronto since signing.

“It’s been a whirlwind,” he told us from a restaurant in Los Angeles, “I was back at home in Europe, and I flew straight out to LA for training camp. I won’t be in Toronto for a month – I’ve got no house, and my stuff is dispersed all over the world. Here we are. I’m training.”

The 26-year-old left the Canadian Premier League with a gold medal around his neck, having helped the club secure its first-ever North Star Shield in a 1-0 win against previous title holders Forge FC. The six-foot-two defender clocked in 59 appearances for the side over the past three years, contributing five goals and one assist while showing big individual gains in each consecutive season.

His rise up to the MLS level doesn’t follow your typical path: like Richie Laryea and Cyle Larin, he was playing in League1 Ontario not long before landing this opportunity at the MLS level, with the Canadian Premier League proving to be the perfect intermediary between the two for the defender.

“It’s kind of a little surreal,” he admits, “I’m excited. The way you learn is from the best, and so I’m training with the best. I think in that environment, every single day, I’ll be learning and improving.”

It’s a metric that he’s hit before: his year-over-year gains with Pacific turned a lot of heads, with head coach Pa-Modou Kah telling us on numerous occasions that MacNaughton was an MLS quality defender. Now he has the chance to prove it.

“When I look at him and having played in MLS myself, I see him as an MLS defender,” Kah had told us, “I think the greatest reward for him as well as us as a club is for him to move to a higher level where he can test himself, because he truly deserves it and he is ready for that level.”

His acquisition comes amidst a flurry of defensive movement from a TFC camp undergoing a full spring cleaning: defenders Omar Gonzalez and Richie Laryea have moved on, with Kemar Lawrence also set to exit. Bradley has brought in former Seattle Sounders centre-back Shane O’Neill, with Mexican defender Carlos Salcedo rumoured to be en route, too.

MacNaughton arrives as a budget-friendly domestic option with a high ceiling. His entrance also comes as a testament to how in-tune Bob Bradley has been with the Canadian soccer market, having already brought in quiet-but-sharp additions in Greg Greg Ranjitsingh and Deandre Kerr just a few days ago.

“He’s a guy who’s been in the league a long time, and he knows a lot,” said Lukas of his new gaffer. “He has a lot of experience. I’m sure he understands that there’s a lot of talent in Canada that hasn’t been reached yet. He’s looking to take an opportunity that has kind of been passed up on so far, and it showed that people are watching the CPL and are aware of what’s going on. It’s a great thing to see.”

His former league is a few months away from its fourth-ever season. It has surpassed expectations for its level of play and will see a club in both the Concacaf Champions League and Concacaf League this year. MacNaughton had arrived there a relative unknown, and certainly a late bloomer at the professional level: he was 23 when he turned pro with Pacific.

“Without the CPL, I wouldn’t be playing here right now,” he put bluntly, “It was a place and time where I had done my schooling, and after I had finished I was too old for an academy and I wasn’t necessarily good enough to play for an MLS team yet. There was a void, and I found myself in League1 Ontario.”

The six-foot-two defender split three seasons with the North Toronto Nitros and Alliance United, helping the latter to playoffs in 2018 en route to an all-star nod.

“It’s a great place because there is some talent, but it’s also semi-professional: you have in-and-out athletes, you have inconsistencies. There’s a big difference between the top half of the table and the bottom. It’s not that next step. The CPL was that next step for me.”

MacNaughton’s first steps as a professional saw him arrive to Pacific FC as one of its most green recruits, thrust into an environment full of Whitecaps Academy products, professionals returning from abroad, and seasoned veterans like former TFC forward Issey Nakajima-Farran and Vancouver’s Marcus Haber.

“My personal development was really good. To get in that door at the beginning and get comfortable as a professional, it helped me understand the pace of the game and what’s required at the next level. It was crucial, and I enjoyed it. As far as the CPL goes, it has grown enormously in its first three years. If it keeps going like this, I can only imagine where it’ll be in another three.”

Toronto FC fans might recall Lukas MacNaughton playing against the reds in the Canadian Championship semi-final last year, which now-departed head coach Pa-Modou Kah said was an excellent measuring stick for his athletes. MacNaughton looked good on the night, though TFC took the result 2-1.

“Playing at BMO Field was a different experience than the Whitecaps,” he says of the team Pacific sunk 4-3, “to be in that stadium and feel what it was like to be at the next level, it was unbelievable.”

It’s something he’ll become quite acclimated to if the season goes as planned. He’s keen to learn from a star-studded roster that includes players like Michael Bradley, Alejandro Pozuelo, and Jonathan Osorio, with world-class winger Lorenzo Insigne slated to arrive later on.

Before signing on with TFC, MacNaughton wasn’t the only CPL athlete rumoured to be in MLS considerations: league star Marco Bustos has long flirted with an MLS return, whilst it is now confirmed that left-back Kwame Awuah has made a strong case for himself with the Vancouver Whitecaps. Lukas believes there’s plenty of MLS-worthy talent in his former league.

“A bunch of them,” he says, before waiting a beat and adding “but only on Pacific.”

Born in New York but raised in Brussels, Lukas is the child of a Canadian father and Austrian mother. He’s always had big aspirations in football, developing with a local club in Belgium until he was sixteen.

“In Belgium, if you’ve not signed a professional at that age, you’re kind of done. For me that was fine. I focused on school, and played on my school team until I was 18, and we won a bunch of tournaments there.”

His father had grown up in France, but had returned to Canada for university in his formative years. MacNaughton followed in his footsteps, enrolling to become a master of architecture at the University of Toronto. “It was funny, really, I showed up at the university from Belgium, and they told me to show up to training. The starter in the next match got sick on the way to the game, and so I was playing in it. I had been there for three days.”

Lukas would go on to make 63 appearances for the Varsity Blues, earning four straight OUA First Team honours and, having sometimes played as a forward at that level, registering the most goals for the Blues during the 2016 season. Toronto FC fans might want to watch him on set pieces – he’s got quite a jump.

Some fans might raise an eyebrow on MacNaughton’s comparatively late arrival to the MLS level, especially given his atypical path to get there. That doesn’t worry him.

“If I may take the example of Jamie Vardy on N’Golo Kante,” he says, “at this moment I feel better than I’ve ever felt in my entire life. I feel healthy, fit, and strong – I feel like I’m able to handle the game way better than I ever have.”

Referencing the likes of Vardy and Kante – who produced drastic rises up the footballing world at similar ages – shows an unapologetic, clear drive for the 26-year-old.

“I’m ambitious, and I think if you work hard enough anything is possible. I want to be the best defender in MLS, I want to play for Canada, I want to go to the World Cup with Canada. Those are all goals that I have and I’ll put in the work to try to achieve them.”

The defender has been quite open about his ambitions with the Canadian national team, where he’s closely followed the trajectory of Alistair Johnston. Like MacNaughton, he was a League1 Ontario standout before getting his MLS opportunity and – once there – quickly put himself on Herdman’s radar.

MacNaughton is also eligible for the US, Austria, and Belgium, and while he’s not saying a flat no to those, it’s Les Rouges who have his attention. Their recent rise following years of being underestimated draw a parallel that hits quite close to home for the centre-back.

“They’re underdogs in the way that they don’t have that respect, and I feel like I’ve had the situation my whole career. To be able to play for a team where now they’ve grinded their way through, fought for everything, and are proving themselves – I want to be part of that.”

MacNaughton becomes just the second ever CPL-to-MLS transfer, with former Cavalry defender Joel Waterman having made the jump to 401 Derby rivals CF Montreal in 2019. Over there, the 26-year-old will be now entering his third season with the MLS side, and his extended tenure was ample motivation while Lukas worked his way up from the CPL.

“He’s a centre back, and I played against him, saw what he does, and I’ve seen he’s been successful at this level.” Now Lukas has an opportunity to replicate that success, though he’s forward in saying he wants to surpass it, too.

“For me, it’s the right moment,” he says of the move, “it’s been a long time coming and there’s been a lot of hard work, but I think I’ve come to a point where it’s bittersweet to leave Pacific FC, especially with the way the season went and how incredible it was. But, I do think it’s time to move on. If anybody gets that chance, it’s the right choice.”