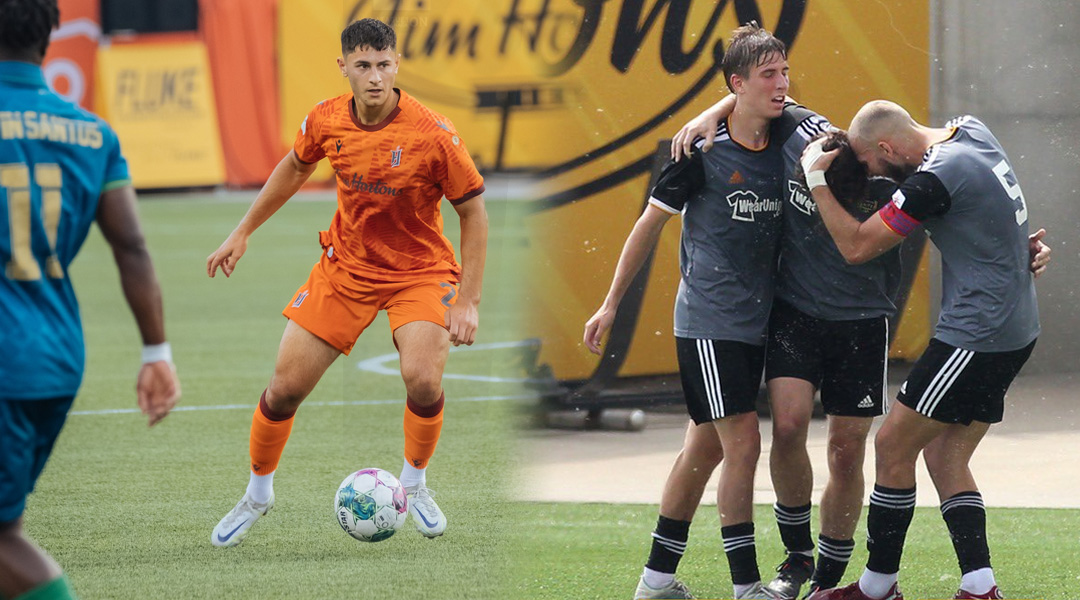 It was a rough day for Hamilton’s semi-professional and professional teams as both Hamilton United and Forge FC fell to defeat in a Tim Hortons Field double-header.

The two teams lost to Simcoe County Rovers and York United respectively in a packed day of action. Here is a look back at what went down:

In what is the final full weekend of League1 Ontario men’s regular season, and the Simcoe County Rovers came to Hamilton knowing they needed a win to clinch a playoff spot. Standing in their way was Hamilton United, who has impressed at times in their opening season.

It was the hosts that broke the deadlock first after half an hour through the league’s leading goalscorer Miles Green. The striker was slipped in, beating the Simcoe keeper to give United the lead.

That would be the score heading into half-time, with the Rovers still chasing an equalizer.

In the second half, shortly after a goalkeeper substitution for Hamilton, the Simcoe club got their response. A perfect ball in was tapped home by Beckford to level the score at one apiece.

Still, the Rovers needed a win to be assured of a top six position. Any other result would have required some help from other games. With that in mind, the visitors kept pressing for a go-ahead goal throughout the final quarter of the game.

Just when it looked as if they would have to hold their breath tonight, Rovers struck late on: a brilliant run on the right wing from winger Ethan Beckford gave him space before lashing a shot that fooled the Hamilton United keeper.

That was the last goal of the game, with the Simcoe players and coaching staff celebrating at the final whistle. It ended 2-1 to the guests, allowing them to partake in the postseason in their inaugural campaign.

At the time of writing, Simcoe County Rovers, along with Vaughan Azzurri, Blue Devils, Alliance United and North Toronto Nitros have booked their place in the playoffs. Vaughan and the Blue Devils will get first round byes, while the North Toronto Nitros will welcome Simcoe County in the first round. Alliance will await the result of Sunday’s game between Burlington and Pro Stars. Should Pro Stars pick up three points, they will extend their season at least one more week. Any other result will see defending champions Guelph United claim sixth place and battle Alliance next week.

Hamilton United will finish eighth, having earned one more win than Sigma FC. Electric City, Woodbridge Strikers and Scrosoppi round out the top 12 on the year.

In the CPL tilt, it was York United who got the better of their local rivals Forge FC, earning a 3-1 victory.

The Nine Stripes came out with a direct approach against the hosts, getting some chances early on. It seldom was a surprise when Osaze De Rosario got contact on Paris Gee’s cross after seven minutes. That put the guests in front.

From there, the majority of the chances went Forge’s way, having more than enough opportunities to tie the game. While York did have a couple of good chances themselves, it was the Hammers who dictated the first half.

It took Forge seven minutes in the second half to find the leveler. Captain Kyle Bekker took a short corner to Tristan Borges, who faked a cross then cut to the top of the box before firing a shot that beat Eleias Himaras.

That was the best it got for Bobby Smyrniotis’ side though, as Chrisnovic N’sa gave York the lead again just six minutes later. Also given enough space, the full back hit a powerful strike into the top corner, giving Henry no chance.

The Nine Stripes capped of the scoring ten minutes later as Mo Babouli – now a Nine Stripe – got into the box and converted a perfect strike. The former Hammer did not celebrate his first marker since joining the Torontonians, but it did seal the deal for his new side.

From there, Forge brought on some offensive power in attempts to get back into the game. Unfortunately for them, there was just no stopping York on the night. It ended 3-1, giving Martin Nash’s York a massive three points to take back home.

The win allows York to stay a point back of HFX Wanderers, who won the other CPL tie 1-0 versus Pacific earlier in the day. It is also York’s second straight win. They still are 11 points behind Cavalry, with the Cavs having a game in hand.

Forge drop their second outing on the spin, but still lead the league. That will change tomorrow as either Cavalry or Ottawa will pass the Hammers as the two will go head-to-head. York will head out to ATCO Field next weekend to face Cavalry, while Forge will make the trip to the nation’s capital to meet Ottawa.