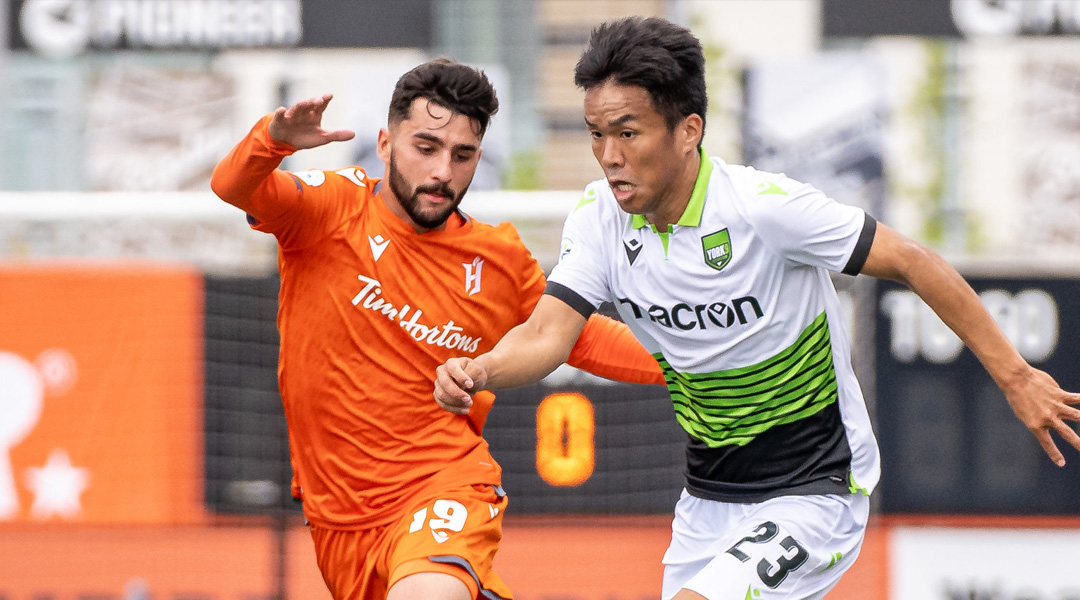 Forge FC midfielder Tristan Borges has bagged his twelfth goal of the season to retake the top spot in the Canadian Premier League golden boot race.

The 21-year-old former SC Heerenveen midfielder stepped up to the penalty spot in Tim Hortons Field during this Sunday’s 905 derby, which saw Nine Stripes defender Diyaeddine Abzi penalized in a debatable handball call.

The penalty was coolly converted by Borges, who beat York9 FC goalkeeper Nathan to put himself in the top spot for the inaugural Canadian Premier League golden boot race. While Borges was evidently happy to score against York9 FC for a third time, the top-tier goalscorer kept things simple in his post-match comments:

In my opinion, that’s just a fortunate call for us, and you’ve just got to bury the chances that you get.

Borges had previously been tied for the top spot at eleven goals with Pacific FC striker Terran Campbell, who has been a force to be reckoned with for the west coast club ever since he started to slot in up front for Pacific FC in the fall season.


Speaking with Edmonton-based reporter Thomas Nef last week, Borges – who has played with Terran Campbell through his time with various youth levels of the Canadian national team – was complimentary of his rival golden boot contender:

I always knew that he was a goalscorer. Obviously this year he’s been showing it, but that’s not something that I’ve been focusing on. I’m really trying to focus game by game, and for the team, try to get three points every single game and to focus on the finals.

The fine goalscoring form of Tristan Borges has led to several league firsts like the youngster becoming the first player to score against every other Canadian Premier League team. On his way to accomplishing the impressive feat, he also became the first player in the league to score an olimpico.

York9 FC striker Rodrigo Gattas had a golden opportunity to put himself third place in the golden boot race alongside Dominique Malonga after York9 FC was awarded a penalty in the 93rd minute, but he slotted the ball wide to the right with the last touch of the game, making Tristan’s converted penalty the game-winning goal.


With the Canadian Premier League finals due to take place between Cavalry FC and Forge FC, Tristan Borges will have two extra games over Terran Campbell to solidify his place as the league’s top goalscorer.

That being said, Dominique Malonga is currently only three goals behind Borges. With Cavalry FC due to play Forge FC twice in the regular season before the two-legged finals, it’s fair to say that the Congolese international is still in the race, too.