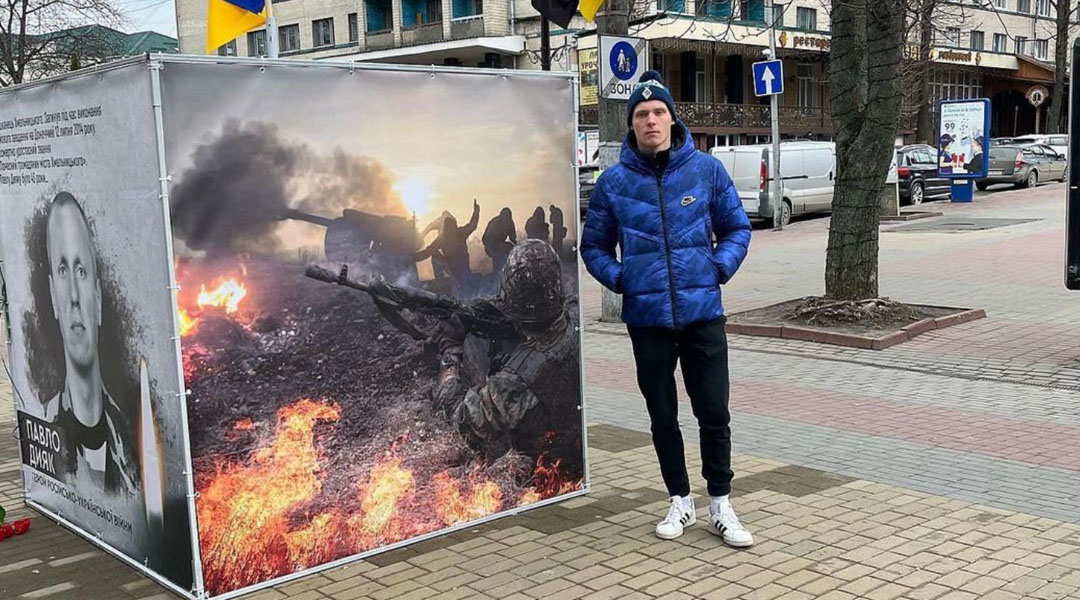 Usually tasked with saving goals, Svyatik Artemenko is now trying to save his ancestral home.

The 22-year-old Guelph United goalkeeper has enlisted with the armed forces of Ukraine to help protect a country where he has deep familial roots. In a war that has already cost hundreds of lives and displaced an untold number of civilians, it is a noble act that Artemenko is aware could be his last.

It has been a whirlwind week for the Canadian citizen, who had been hoping to follow up a championship winning League1 Ontario season with a professional contract. He had earned a tryout with a Ukrainian club called FC Podylla, located in the western city of Khmelnytskyi, and flew to Ukraine for the opportunity before war broke out.

He landed a first team contract with the team three days ago, but just a single day later watched in shock with the world as Russia invaded Ukraine through land, sea, and air. War had come, again, to a country that never wanted it.

Artemenko – who has familial roots to Ukraine – answered the call to arms, although he didn’t have to.

“It is not mandatory for me to enlist, because I am a Canadian citizen at the moment,” Artemenko told Guelph Today on Friday, “but, I think it is really unfair for me to be living here because I did come here for a professional soccer tryout and I did end up signing a contract.”

The 22-year-old also believes it would have been unfair on him to turn his back on his own people and many of the faces he grew up with. While an estimated 100,000 people have fled the country as missiles began to drop, Artemenko felt it best that he stay to protect Ukraine from its foreign invaders.

“I think I need to go protect my own country and defend what’s right, the borders, the freedom of my country, and my family that are here.”

The borders suffered heavy damage the fastest, with the Snake Island outpost going down through a shelling after making a statement. Shelling from Russian soil and warships opened the fighting, and have continued in the days since. Land skirmishes have occurred sporadically as Russia continues to bring infantry and armor through border points.

Friday night was a long one for Artemenko, who had little time to prepare himself for war. Among many other volunteers, he went to Odessa and is now en route to a war zone as Ukraine fights to retain its independence.

The country has moved quickly from calling upon its reservists to all able-bodied individuals who are willing to help the country fight for its freedom. Artemenko’s own experience reflects that: when he made the choice to enlist, there were many others aiming to do the same.

“When I went to the military base to enlist there were lineups in which I had to wait almost two hours,” said Artemenko. “I got lucky because I came pretty early, so I didn’t have to wait that long. But once I walked out the lineups were almost two or three hours long.”

Now a mobilized member of the armed forces of Ukraine, the current location of the 22-year-old goalkeeper isn’t known at the moment. He was en route to a war zone when Northern Tribune last touched based with him.

“We will see,” said Artemenko about taking another phone call, “I’m currently on my way to the warzone to go fight. I’ll let you know.”

The majority of the world has strongly condemned what has been called an unjustified invasion from Russia, who have put up a fierce fight for air supremacy as land combat continues across many fronts. Russian forces have entered from Belarus, Crimea, and their own country, with both sides meeting in land battles as Russia attempts to surround Kyiv and its Ukrainian President Volodymyr Zelenskyy.

While many photos have spread around the world of civilians huddles in subway stations, designated bunkers, and even out-of-service buses, Artemenko says an atmosphere of fear does not exist with the volunteers who are taking up arms against the invasive force.

The scenes unfolding in Ukraine will surely feel surreal to the young goalkeeper, who grew up in Winnipeg and had finally earned a professional contract after years of grind in North America. He had signed with Valour FC as an emergency goalkeeper after impressing in training in 2019, but never made his debut in that year. The following season saw him attend training camp without a contract offer.

It was last season when he signed with League1 Ontario expansion side Guelph United, where some penalty kick heroics helped the club en route to a championship win. Now Svyatik is taking steps into a warzone. The real heroics. Not all will walk away from such an act.

He does have a note for readers, though.