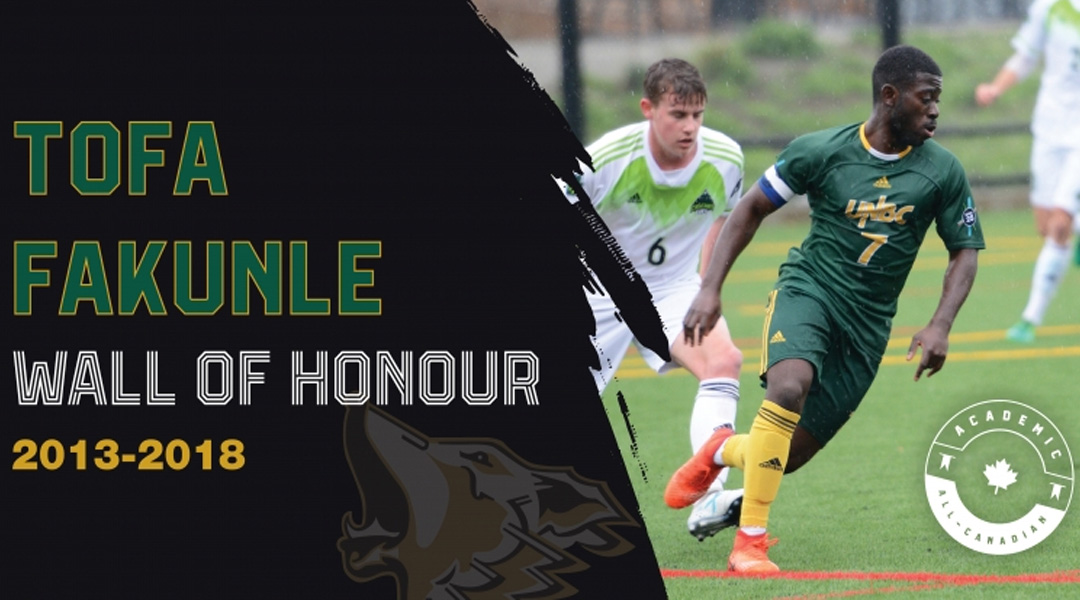 Cavalry FC football operations manager Tofa Fakunle has been added to the UNBC Timberwolves Wall of Honour for his impact on the soccer program.

Fakunle was the side’s captain and graduated from UNBC as the Timberwolves’ all-time leader in goals, assists, points, shots, and game-winning goals.

The former Canadian Premier League athlete played a big role in seeing the university side make its first-ever Canada West playoff appearance, arriving to the side as an integral forward and finishing up his university campaign with UNBC Rookie of the Year, Male Athlete of the Year, Academic All-Canadian, and Most Valuable Player awards along with multiple golden boots to cap off his U SPORTS career.

Fakunle arrived to Prince George in 2013 after being recruited by former UNBC head coach Alan Alderson, with the youngster coming in with a pedigree that already included a provincial championship and two provincial silver medals by the time he began his post-secondary education.

He was immensely polite before training, and then he was the most intense in training. He held himself to high standards, but he also went out of his way to make sure those around him were playing all out. His personality could fill a room, either with intensity or with a smile that could brighten the entire building. When I got the job at UNBC, he was instantly on my ‘find a way to get him here’ list. I knew he was the kind of player that would play a significant part in building a culture of excellence and winning together.

His freshman season saw him lead the UNBC Timberwolves in both goals and points. While the side finished outside of a playoff position, he took home the UNBC Male Rookie of the Year and the program’s Golden Boot. He followed that up by leading the the side for points once again in 2014, with the Timberwolves finishing on a record-high number of wins under his leadership.

A head coach change in 2015 challenged Fakunle to adapt to a new playing style, with the squad describing some growing pains under the leadership of Steve Simonson that, the following year, truly blossomed into a play-off capable team. The 2016-2017 saw Fakunle break into new heights for goals and points, being named the Timberwolves MVP, taking home the UNBC Male Athlete of the Year Award, and earn a U SPORTS Academic All-Canadian nod, too.

He is a top-class person. Tofa showed us all the effort needed to grow. He was willing to help anyone who needed it, on or off the field. We saw him as the first to take a true shot on UNBC, because he was an elite athlete from a big city who saw the potential of the program.

The 2017-2018 season was Fakunle’s final year for the green and gold, and it saw him finally lead the side to its first Canada West playoff appearance in the program’s history. The successful campaign saw Fakunle win Canada West All-Star honours in his final year as a collegiate athlete, with the captain departing as the most high-profile Timberwolves male soccer player of all time.

Of course, it wasn’t just the Timberwolves and his university education that he was focused on: Fakunle also began playing for PDL (now USL2) side Calgary Foothills in 2015, with the Lagos-born athlete being part of the team to win the 2018 PDL Championship. He remained with the side in 2019, contributing six goals and five assists in thirteen appearances as the team won the USL2’s Northwest Division before bowing out in the conference sem-finals.

With the USL2 season now concluded, the Foothills Captain then earned a professional contract with Cavalry FC, becoming the fourteenth Foothills player to make the jump to the CPL side.

Fakunle’s professional career saw him make his debut as a late game substitute in a 1-1 draw against Pacific FC, with the former Timberwolves athlete making two more late substitute appearances for the side in the inaugural CPL season.

Next year saw rumours that he was trialing with Valour FC before the pandemic struck in 2020, though he ultimately re-joined Cavalry FC as part of its coaching staff.

Notably, the club operations manager was added to the matchday roster during a group stage injury crisis against at The Island Games, making one last unexpected appearance for the side as a late game substitute against the Halifax Wanderers.

Wherever Fakunle has gone, comments about a professional and caring attitude have evidently followed. While his time as a CPL athlete was short, the 25-year-old remains with the league in a coaching position with Cavalry FC and, of course, he has plenty of awards from his U SPORTS and PDL/USL career to look back on.

As a Timberwolves standout, it’s nice to see him recognized by his alma mater. The official university press release can be found here.