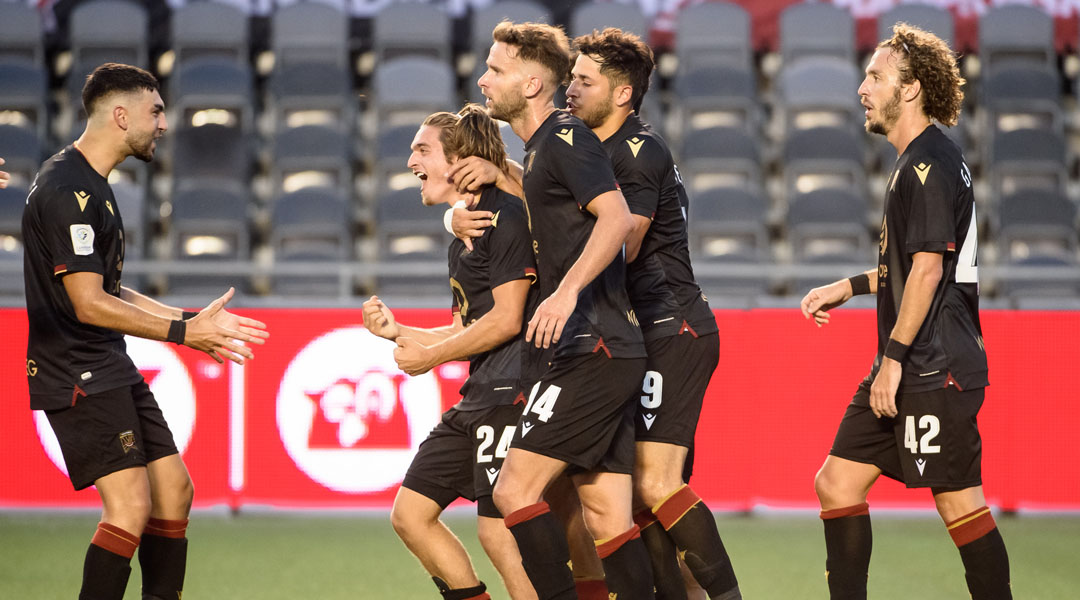 Atletico Ottawa’s first-ever Canadian Championship match ended in a 3-2 loss to Valour FC, who struck twice on the counter in the second half to advance to the quarter-final stage of the domestic cup competition.

Rob Gale’s side would equalize on the half-hour mark, with CF Montreal loanee Sean Rea firing a shot from just inside the box that bounced into the far corner. It was his first professional goal at the club level:

A first half that saw both teams on full throttle transitioned into a counter-attacking game from Valour in the second half, and the tactical adjustment from Gale proved to be a winning decision: Austin Ricci got his first goal on the night after a strong interception from Rocco Romeo, who carried the ball forward and found Akio on the flank, with the rookie forward crossing in a ball that Ricci was able to tap in:

Ricci would be celebrating once more just three minutes later, with the physical forward finding himself on the end of a long ball and able to use good technique to burst right into the box to loose a shoot before he could be closed down by multiple defenders. With that, it was a brace for Ricci during what we can safely call his breakout year.

Host side Atletico Ottawa would pull one back in the 92nd minute, with Spanish midfielder Viti Martinez scoring a from inside the box at the last – though it couldn’t undue the damage of Ricci’s second half brace, with the home team crashing out of its first Canadian Championship cup match with a 3-2 loss.

The home side certainly had its chances, with teenage midfielder Antoine Coupland likely wanting a few back. Mista made note that the expansion side has improved a lot on the ball, had better possession, and were much braver, stating that the team must continue to play like it did tonight.

Valour FC now advances to face reigning Canadian Premier League champions Forge FC in the quarter-finals, a team they’ve beaten twice already this season. It will have also felt good for the side to get an away win under their belt, which is their first of the season thus far.

The preliminary round of the 2021 Canadian Championship has now seen seen Cavalry, Halifax, York United, and Valour advance over Edmonton, AS Blainville, Master’s Futbol Academy, and Atletico Ottawa respectively. The last match of the round will be a CPL-vs-MLS clash between Pacific FC and the Vancouver Whitecaps this Thursday.

Atletico Ottawa will now dust itself off and prepare for an away trip against Forge on Wednesday, while Valour will head home for a match against FC Edmonton on Tuesday.