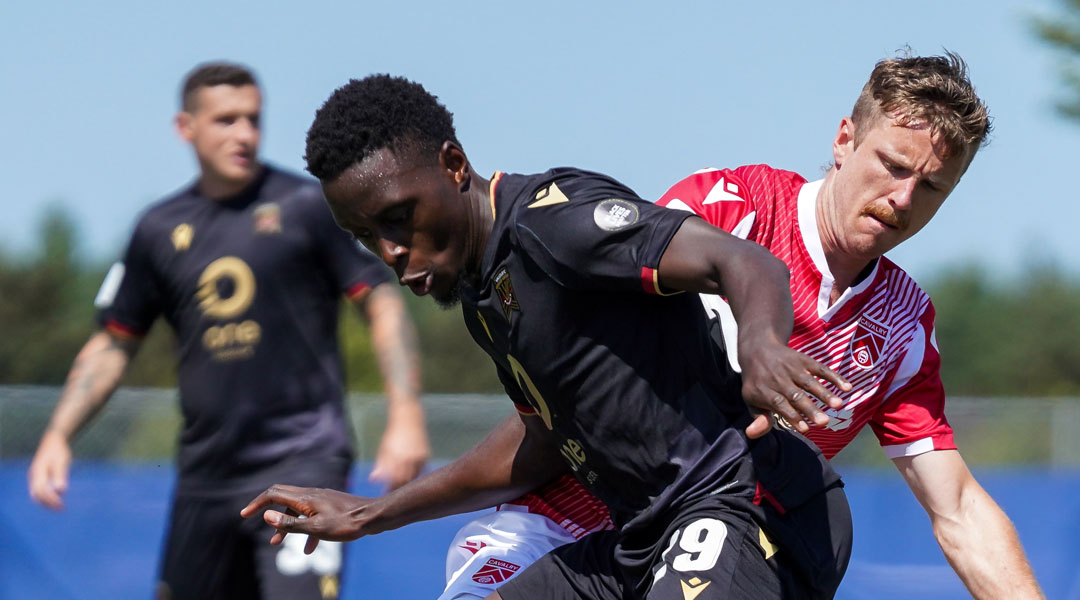 Valour FC kicked off its Island Games campaign with an early afternoon match against Cavalry FC, who had played Forge FC to a 2-2 draw to open the season last Thursday. With the Winnipeg-based side falling to a 2-0 defeat today, the league table now takes a familiar sight with Cavalry FC at the top.

Valour FC took to the pitch with an almost entirely all-new starting eleven, with Winnipeg native Dylan Carreiro representing the only returning face for Rob Gale’s starting squad. Cavalry FC, meanwhile, saw Haber and Farsi rotated in to start, with a debut being handed to Toronto FC II loanee Robert Boskovic, who aims to use the league as a stepping stone to the MLS.

The match lineup saw Jair Cordova and Jose Hernandez once again left off of the Cavalry FC starting line-up, with the club stating that the duo were listed as hopeful returns for Thursday’s match against FC Edmonton. Valour FC only had Chakib Hocine on the injury list, which may be a worrying sight given that he missed most of his 2019 campaign through injury.

Things almost got off to a very dramatic start when a high boot from Sergio Camargo caught Jean-Baptiste in the face, but the referee kept his red card in his pocket and simply gave Camargo a cautionary yellow.

It was Cavalry FC who would open its account in the 28th minute after good buildup from Tommy Wheeldon Jr.’s side, with full-back Mohamed Farsi crossing in a great ball for big target man Marcus Haber to head home. Haber, 31, had a tough season at Pacific FC last year, but has been quick to repay the faith shown in him by his new club. The goal would mean former AS Blainville full-back Farsi has now contributed to two goals after having won a penalty for his side last week.

Four minutes later, Rob Gale would feel the pangs of his previous defeat to Cavalry return after Haitian international Andrew Jean Baptiste saw a shot rocket off his arm within the box, with the referee immediately awarding a penalty to Cavalry FC. Sergio Camargo stepped up to the spot, chipping a cheeky panenka goal beyond Valour FC goalkeeper James Pantemis to double his team’s lead.

Valour FC saw out a frustrating first half that saw Tommy Wheeldon Jr.’s side dominate possession, with the second half then seeing Valour FC lose out on veteran defender Arnold Bouka-Moutou following a worrying hamstring aggravation.

Cavalry FC perhaps got a bit lucky as the second half wore on, with Robert Boskovic appearing to concede a hand ball within the box, though the foul wasn’t caught by the referee.

While Cavalry FC kept the Valour defensive line busy for the rest of the game, the new VFC squad would hold firm for the rest of the match to prevent any comparisons to last year’s blowout loss. Andrew Jean Baptiste seems a particularly good defensive pickup for Gale’s side, with the 28-year-old defender having put in a good shift despite the result.


With his club’s first competitive match in ten months now out of the way, Rob Gale’s side will now have a few days to prepare for its next challenge against Atletico Ottawa this Wednesday. The league’s first expansion team impressed against York9 FC on Saturday, so the mid-week matchup should prove an interesting one.

Cavalry FC will comparably have an extra day of rest before it takes on FC Edmonton this Thursday for the only Al Classico of the regular season. The Eddies will have the same amount of rest time after playing Forge FC later on this afternoon, with the result of that match determining if Cavalry FC will hold onto its spot at the top of the table.

Today’s comfortable Cavalry FC win represents the first time a match at the Island Games hasn’t resulted in a draw, with four games having resulted in fourteen goals throughout the season so far. Every match is available on OneSoccer, with the likes of CBC Sports, CHCH TV, and now (reportedly) Fox Sports picking up select matches.