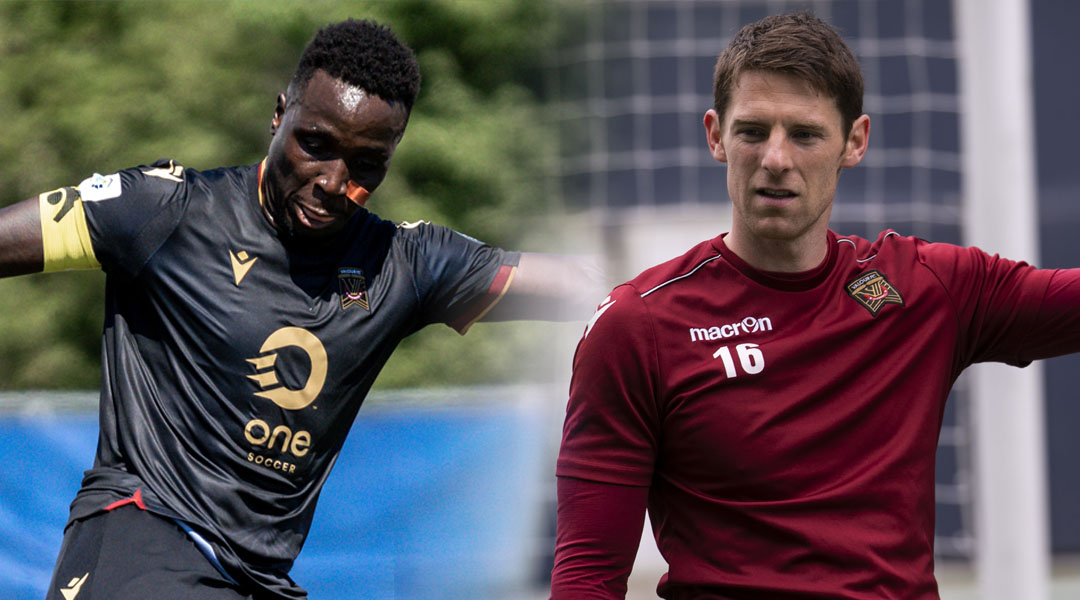 The Island Games campaign had seen Winnipeg native Dylan Carreiro named co-captain, but his early retirement this year opened up the door for Jean-Baptiste, who’s Island Games performances helped bring the club’s average goals conceded per game from 1.86 in 2019 to 1.29 in 2020.

To be announced as captain, the feeling is almost indescribable. When I was in the office with them today I told them my heart was pounding because I couldn’t believe it. To know that they trust me, along with Daryl, to help lead this team is a great honour.

The decision is an easy one to follow: the former Portland Timbers draft pick brings in plenty of high level experience both in the MLS and abroad, had captained the New York Red Bulls II in 2015, and even wore the armband twice for Valour FC at The Island Games without being the official co-captain.

Speaking with Ed Tait following the decision, he revealed that he was touched by the decision after having felt his leadership abilities went unrecognized at other clubs.

I’m a person who was quite vocal in every locker room I’ve been in. I try to get along with everyone because I’m big on team chemistry and bonding. It’s why, over the years, I’ve managed to learn different languages because every team can have its cliques. I’ve always prided myself in being adaptable and having the respect of my peers to be welcomed in those groups. To see someone actually see that now and recognize it is almost a sigh of relief that it is being embraced.

For 34-year-old veteran Daryl Fordyce, the continuation of his captain’s duties was something he’s been ready for. When we first spoke with him after he signed with the club in January 2020, he told us that he was ready to do whatever it takes to help the club, and that mentality has evidently brought him far.

The versatile Belfast-born athlete was quick to recognize the importance of unity in the squad, which is something that players have been preaching in spades after Gale and Rocke rebuilt the squad after its inaugural campaign. The locker room wasn’t quite so tight then, with Jordan Murrell stepping down as captain following an unprofessional outburst and, in tandem with co-captain Skyler Thomas, departing the club at the end of the season.

The players have to feel comfortable to come speak to you and know that whenever the [redacted] hits the fan that your captain will be there and have your back. The best captains I’ve had in my career, some of them were loud, some of them were quiet, but you knew they had your back. That’s such a big reassurance whenever you walk on the pitch. Even before that, when you’re in the tunnel there’s just certain guys that make you feel safe, secure… it gives you confidence.

The club has now undergone several weeks of preseason training ahead of the 2021 Canadian Premier League season. After having coming three points away from a group stage berth last year, Fordyce states that the important thing now is to simply secure results as a team.

There’s a lot of leaders within our group. There’s a lot of mature players, but also younger guys who are leaders. We’ve got such a good group this year and it’s stronger than last year in terms of character and quality – that’s not being disrespectful of the guys who aren’t here now. As long as you hold yourself and your teammates accountable, as long as you fight for each other at the end of the day we’ll get through anything together. And, hopefully, we’ll get the results together.

There are thirteen returning players from the side’s 2020 roster, with six new additions confirmed so far. The club has added an injection of youth with the signing of William Akio and the loans of Jonathan Sirois, Sean Rea, and Jared Ulloa, while also bringing in experience through former Eddies midfielder Keven Aleman and high-profile Brazilian signing Rafael Galhardo.

With four more roster spots up for grabs and several trialists including the likes of Georges Mukumbilwa and Andy Baqeruo attending camp, the 2021 Valour FC roster is looking quite strong on paper – though whether Fordyce and Jean-Baptiste can lead the team to glory in the upcoming season remains to be seen.

The 2021 Canadian Premier League season is expected to start in a single location as soon as June 26, with rumours indicating that Manitoba may be hosting the seven other CPL teams.