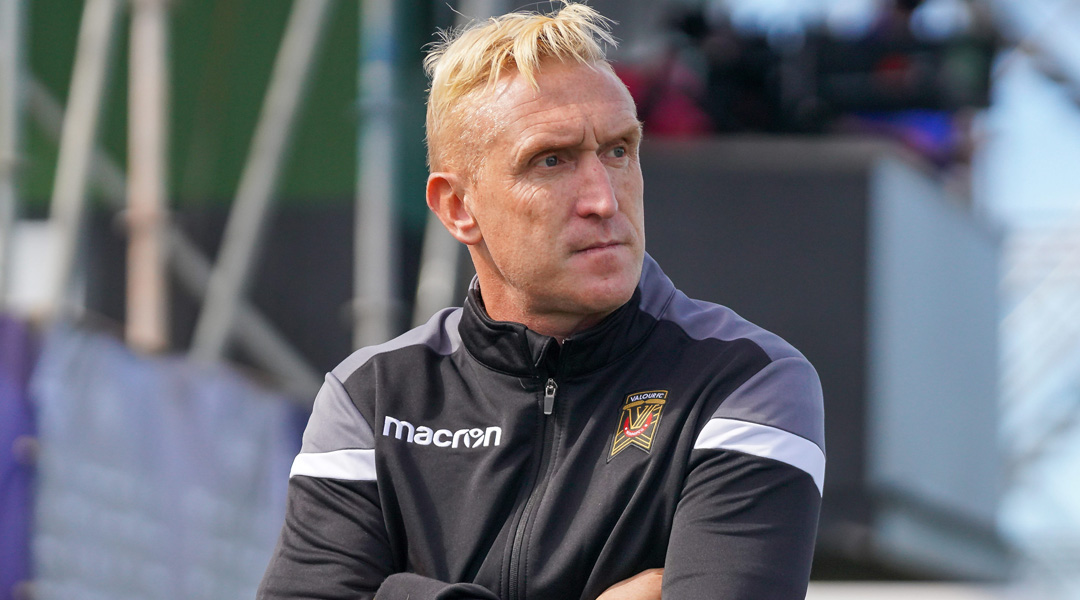 Canadian Premier League side Valour FC has already recruited fifteen players for the upcoming season (sixteen if one counts the expected return of Jose Galan), but the Winnipeg-based side still has a few important pieces to look at.

Speaking on a video chat with CanPL’s Marty Thompson and Charlie O’Connor-Clarke (full conversation is available here), Gale offered some new information on what positions the club is looking to reinforce ahead of the 2021 Canadian Premier League season.

While the Winnipeg-based side will obviously be taking a look at its 2021 CPL-U SPORTS Draft picks, the club gaffer noted that he will be taking a look at another U SPORTS athlete as well. As Jamie Watson‘s trial with the Halifax Wanderers implies, a U SPORTS athlete doesn’t need to be selected in the draft to be eligible for a developmental contract.

Gale’s side only has one last remaining international roster spot, which is presumably being left for Jose Galan – so what he describes as the ‘last couple of pieces’ will all be domestic talents from closer to home.

As it turns out, one of the bigger signings that fans should expect will come in the form of a defensive addition:

There’s one particular we’re still working on, a key defender for us. I think that’s a fair assessment. We’ve got Amir Soto, we’ve got Andrew Jean-Baptiste, two top level Concacaf central defenders. Arnold Bouka-Moutou on the left, Federico and Cebara on the right. We’ve got Raph Ohin who can do a job, and then Nestor Monge can drop in as a centre-back at the drop of a hat.

Last year saw the side play host to a rock-solid defensive centre-back partnership between Andrew Jean-Baptiste and Toronto FC loanee Julian Dunn, the latter of whom played every single possible minute for the side at The Island Games. His impact saw the side’s goals against per game drop from 1.86 in 2019 to 1.29 in 2020, with Valour FC stating that they were hopeful to have Dunn back this year.

Interestingly, he was listed as a Valour FC player in a recent Canadian preliminary Olympics roster, though it’s unclear if this was a clerical error. Should he return to the side, however, he’d certainly do as a key defensive addition – though it’s unclear if Gale was specifically talking about a centre-back.

In terms of other potential inbound defenders, the club gaffer also made mention of 2021 CPL-U SPORTS Draft selection Tony Mikhael. Standing at six feet tall, the Carleton Ravens centre-back will be coming in to trial with the side following a call-up to the Lebanese U-23 team in March.

Gale stated that the club will likely add another athlete in the middle of the park, though it wasn’t clear if this was the other aforementioned U SPORTS addition.

With no goalkeepers on the roster so far, Gale also joked that it’s something the club is thinking about doing at some point. In an official roster update the club released last month, he stated that the club is sorting through some options which included some young Canadian nationals and goalkeepers currently at the MLS level, while the CPL-U SPORTS draft saw the side bring in six-foot-seven goalkeeper Yuba-Rayane Yesli.

In terms of the MLS level talent, it’s unclear if James Pantemis will be returning. He impressed with Valour FC at The Island Games, building off of that momentum to break into the CF Montreal squad and earn man of the match honours on his debut. Further west, there’s the possibility that young Whitecaps standout Thomas Hasal could be loaned out this year, too.

The side was also reportedly in discussions with Matt Silva about re-signing with the side, though it was unclear what role his return would be. This suggests that a coaching opportunity may be in the works, in a similar manner to Mark Village‘s early playing retirement with Pacific FC.

We’ve looking for those extra pieces that say ‘yes, we want to win now’, while still building with the likes of Federico Pena, Raph Ohin, and bringing in players in a developmental level. [We’re] trying to bridge that connection to our youth in Manitoba, because we want those boys coming through. We also recognize that we need to make a better team as well.

The side has shown remarkable year-over-year improvement, with the club struggling to put together results in the inaugural Canadian Premier League campaign before ultimately missing out on The Island Games’ group stage by a mere three points.

That transition came on the back of what seems to be a much-improved locker room culture: while there was talks of negative energy in 2019, players that we’ve spoken to have been full of praise for the squad cohesiveness in 2020. With a large swath of that squad now set to return, Valour FC appears to be positioning itself for an upward trajectory.

We have a long-term vision for our football club. We’ve said that, we’ve laid the ground work, the values, the culture, the community, the fanbase. We have a very clear vision of where we want to evolve our game model, and sometimes you need the players that are tactically adept to be able to recognize that in-game, adjust to situations, and that’s where we’ve evolved over the last couple of years.

With two brand new internationals coming in (or three, considering the re-signed Amir Soto wasn’t able to set foot in Canada last year), Gale acknowledged that overseas talent was a bit of unknown in terms of if they can settle, acclimate, and hit the ground running. With someone like Nestor Monge coming in with vast experience in Concacaf and playing on turf, he says that club has signed athletes with factors like that in mind.

There’ll also be a lot of interested eyes on Jared Ulloa, an 18-year-old Canadian-Peruvian coming in on loan from Sporting Cristal. His signing came as an under-the-radar surprise for Canadian fans, with Ulloa expected to return to his parent club to fight for a first team spot after this season.

With several months to go until the 2021 Canadian Premier League reaches its tentative kick-off date in late May, it’ll be interesting to see how the rest of the Valour FC roster takes shape. With a large portion of the side’s Island Games roster set to return, there will be an expectation that Valour FC continues its upwards trajectory – though as Gale himself has said, there’s no guarantees in football.

Fans interested in tuning in to the full CanPL video interview can do so here.