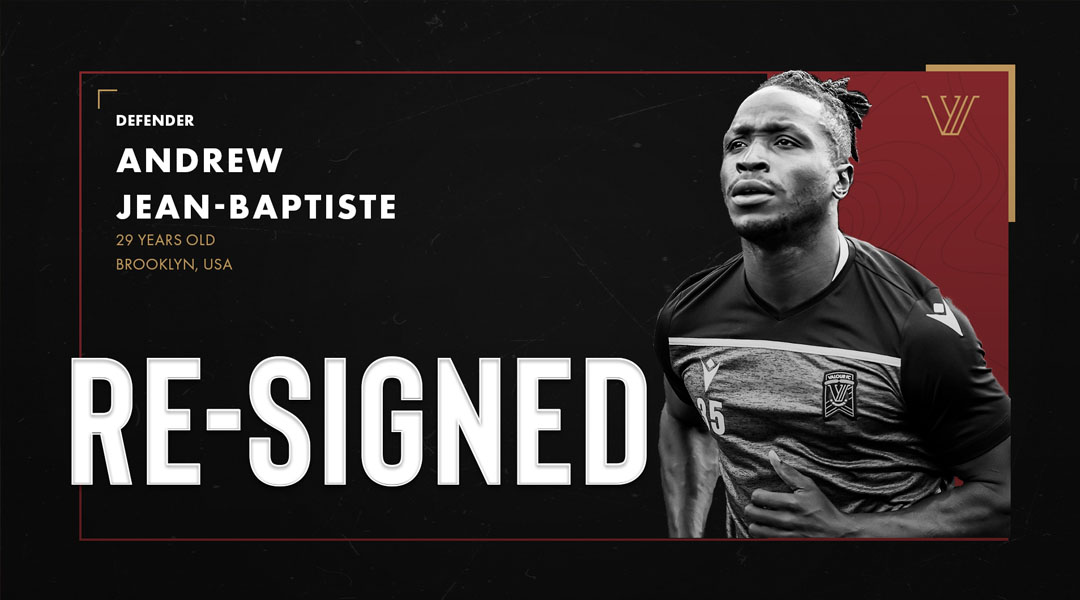 Canadian Premier League side Valour FC has re-signed key defender and co-captain Andrew Jean-Baptiste, who remains out for the season following a knee injury sustained during the bubbled segment of the current campaign.

The Haitian international has inked a new contract that will keep him at IG Field through the 2022 CPL season.

The 29-year-old former Portland Timbers defender has cemented himself as the most important defender for the CPL side, having quickly established himself as a league-leading centre-back after arriving ahead of last year’s Island Games.

He appeared in six of Valour’s seven matches last season, scoring his first CPL goal during a club record 4-0 win over Atletico Ottawa as the team showed big defensive improvements compared to its inaugural season. It was no surprise when Valour activated his option for 2021 shortly after the conclusion of The Island Games.

Jean-Baptiste made seven appearances in the 2021 CPL season prior to his season-ending injury, scoring two goals as the side rose to first place following six wins from its opening seven matches.

The club has only seen just two wins in the seventeen games without Jean-Baptiste since, with an average goals against of 1.58 per game as opposed to 0.28 when he was with them during their hot start to the third CPL season.

I’ve taken pride in my defensive record and that was the path we were on, regardless of whether we won a championship: we wanted to be known as a fortress and one of the better defensive, if not the best defensive team in the league. That’s unfinished business for me.

The 29-year-old becomes the first contract renewal under the Dos Santos era, with the club’s new boss now six games deep into his first head coaching stint. Jean-Baptiste believes the change in structure is beginning to bear fruit for a side hoping it can etch its way back into the final playoff position.

Phillip, right off the bat, came in and provided a different presence in the locker room and with the staff. Some are accustomed to it, some it’s new to them. He’s instilled a lot of order in the locker room and we’re getting some performances now. When I was playing with Rob we got our results and we had a great partnership. His leaving left the team in some hardship, but Dos Santos has come along and steered the ship in the right direction.

The crucial Valour defender had clocked in just over 1,000 minutes for Valour FC overall prior to his injury. While Valour has certainly missed his defensive talents and the way he helped organize the back line, he’s also impressed on the other end of the pitch: after just 13 matches, he’d added three goals to his tally, too.

For now, however, the Haitian international is helping as a voice in the locker room while his body physically recovers from the season-ending knee injury he picked up against York United. He isn’t the only Valour man to have suffered a long-term knee injury, with Austin Ricci still recovering from surgery after a high-paced collision on the pitch in the Canadian Championship.

I’m still trying to regain muscle strength and growth, just to build back what I’ve lost over this time. I’m just taking it slowly, riding a bike and getting some range of motion. There’s a long road to go, but the most-important key is to stay patient and trust the process Then when there’s areas to double down on the work that’s what I’ll do.

The return of Andrew Jean-Baptiste is big news for Valour FC fans, as his presence (and absence) is one of the most notable for an individual player on a league-wide scale.

Valour FC did not disclose the financial terms of Andrew’s contract, which now sees the defender set to remain in Winnipeg for the 2022 CPL season.