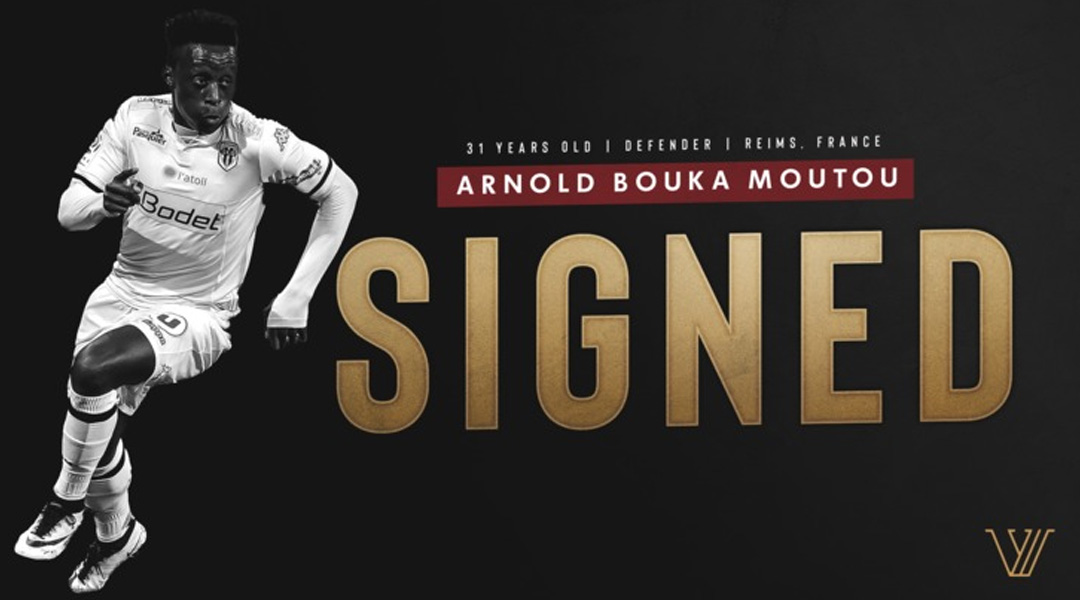 The 31-year-old Ligue 1 veteran signed on with the side this February, with the move turning more than a few heads given the left-back’s high pedigree.

His first season with Valour FC was cut short after he suffered a hamstring injury in the club’s season opener against Cavalry FC, with the defender only returning in the side’s final match of the regular season before suffering another injury shortly after coming on.

Arnold provides invaluable insight for our developing players, and is a terrific footballer. We’re delighted to have him back and can’t wait to see his talent on display throughout a full season.

The Congolese international arrived to the side with 42 Ligue 1 and 70 Ligue 2 appearances to his name. Throughout them, the 31-year-old defender had plied his trade against plenty of top level talents during his time in France, including the likes of Alexandre Lacazette, Kylian Mbappe, and Lucas Moura.

He arrived to the Winnipeg-based side after finding himself surplus to requirements at Ligue 1 side Dijon, but his experience in Europe evidently left Gale convinced he was a worthwhile addition. The same rings true even after a tough year for the defender.

We know how good a footballer he is. We’re hoping that in a full year and proper integration he can get back to the level he’s shown for his whole career. He and his family really seemed to like it here. He got to meet the Francophone community and he really fit in well with the whole squad. It’s a good fit for both.

Gale made mention of the veteran’s impact on players like Federico Pena, the versatile 21-year-old who helped fill in at left-back on more than one occasion at The Island Games. The club gaffer said Bouka Moutou helped him across a big learning curve, and those kind of influences are ones that are needed to help develop young domestic talent.

Despite his injury-riddled campaign in Canada, Gale says that European interest in the veteran defender remained high entering the CPL offseason:

There’s been interest all over Europe in him but he feels he didn’t show what he was capable of and wants to return. We’re just lucky he’s ready to come back for another year.

Even without Bouka Moutou for most of the short campaign, the Winnipeg-based side put forth much-improved defensive performances that saw the side’s average goals against drop from 1.89 last year to 1.29 this season, largely in part to the impressive centre-back partnership of Andrew Jean-Baptiste and Julian Dunn – though returning player Raphael Ohin was a veritable engine for the team, too.

The club did not release the length or financial details of Arnold’s contract.