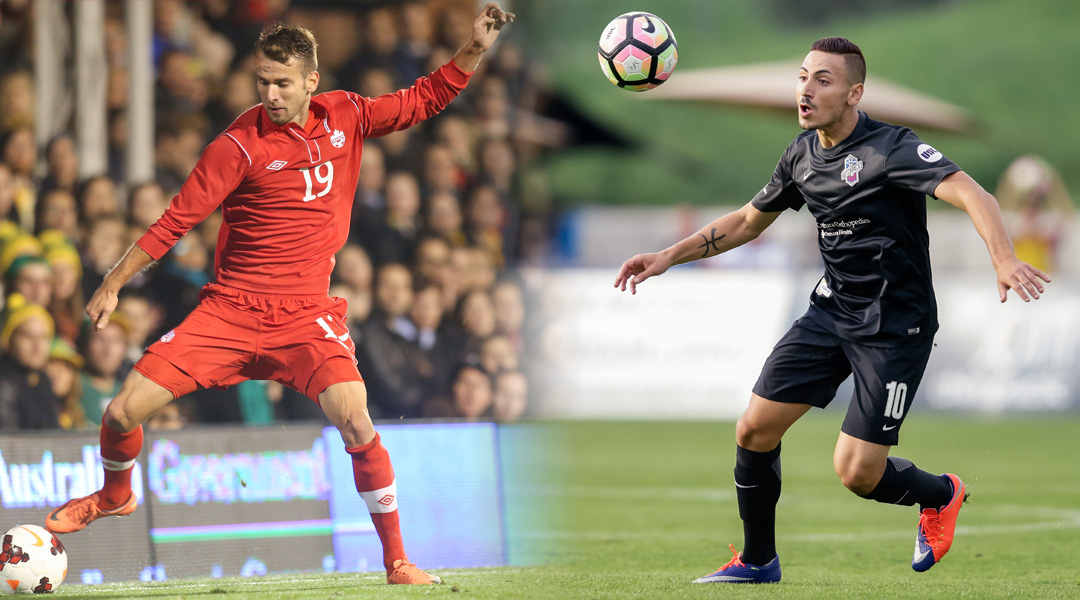 Rob Gale has completed his side’s fourteenth and fifteenth signings of the 2020 Canadian Premier League season by securing the signatures of Canadian winger Stefan Cebara and Canadian forward Masta Kacher.

Prior to the suspension of the Canadian Premier League preseason, Valour FC had been holding trials with a number of Canadians, including the likes of Austin Ricci, Tofa Fakunle, and now-Atletico Ottawa man Brandon John. Cebara’s signing came from this trial, with the 28-year-old stating earlier that signing for the side would be quite a sweet homecoming for him.

Cebara came to Canada as a young child when his family escaped from war-torn Croatia during Operation Storm, the Croatian war for independence. Arriving in Calgary some two years after his family fled to Serbia, Cebara didn’t speak any English, but he and his family adapted, eventually settling down in Windsor.


After getting his start with local football teams in Windsor, a young Cebara returned to Serbia to sign for the youth team of FK Rad in the Serbian SuperLiga. The youngster would then begin a career that would see him play in Central Europe and the Baltic region, with Cebara playing professional football in Hungary, Slovenia, Slovakia, Lithuania, and a second spell in Serbia later on.

Due to contract difficulties, Cebara spent the entirety of the 2019 season without playing, which put him in a difficult spot for the 2020 season. His performances at the Valour FC trials, however, evidently left the coaching staff at Valour FC impressed.

It’s especially that when you are out of the game for a year. Getting back is very, very difficult. Teams are signing players who just came off a season, who just scored and played all the games. Those are the players who are getting opportunities. I’m very grateful to Damian [Rocke] and Rob [Gale] for giving me that opportunity.

Having represented the Canada U-20 side no less than fifteen times, in 2013 the Zadar-born winger made his debut for the men’s national team in a friendly against Japan, coming on as a substitute for now-Forge FC Captain Kyle Bekker. Cebara would go on to make five appearances for Canada, the last of which was against Slovenia later on that year. Still, the 28-year-old was adamant that he has the potential to catch Canada gaffer John Herdman’s eyes once more.

That’s definitely a goal of mine. A big, big goal of mine. I’ve gone through a lot in my career, ups and downs, and it’s a mission of mine to get back on the national team. I think I’m just hitting my prime physically, my prime mentally. Some people reach success at 19-20, some take the long road and reach success at an older age. I’m definitely chasing that goal with the national team.

The Winnipeg-based side has also signed 24-year-old forward Masta Kacher, who spent the last year with USL side Saint Louis FC, where he made sixteen appearances and scored two goals across all competitions.

Kacher starts his career with the Montreal Impact Academy for its founding year in 2011, and in 2015 he signed for the MLS side’s then-USL affiliate, FC Montreal, where he earned regular game time and scored four goals in 36 appearances across two seasons before the club was disbanded.


His prior two seasons in the USL made him a hot commodity in the market, with the Colorado Switchbacks ultimately snapping up the forward. He started every game for the side in the 2017 season, scoring eight goals in 32 appearances. The USL side were planning on bringing him back for the 2018 season, but Kacher reportedly made it clear that he had no interest in staying with the side and was released so that he could join the Real Monarchs.

At Real Salt Lake’s USL affiliate, Kacher saw his first campaign with the side see him score three goals in 24 appearances, with the forward making fourteen appearances and scoring one goal in the first half of the 2019 season. He then made a mid-season jump to two-time defending champions Saint Louis FC, with Kacher immediately becoming a regular in the squad. The Monarchs, meanwhile, would continue without Kacher to win the 2019 USL Championship.


Kacher brings Rob Gale even more versatility, with the forward capable of playing on the left wing as well. He’s represented by OBELISQ, a Montreal-based player agency that represents several CPL players with connections to the province like Louis Beland-Goyette, Aboubacar Sissoko, and Omar Kreim.

With fifteen signings now completed, the bulk of Rob Gale’s roster has been fleshed out. Despite losing the likes of Bustos, Beland-Goyette, and Petrasso, Gale has filled in the vacuum left in his midfield with some interesting signings while relying on plenty of international talent to recoup a defensive roster that leaked more goals than any other side last year.

Whether Cebara or Kacher are ultimately the right pieces to the Valour FC roster puzzle remains to be seen, but their playing pedigree certainly impresses. It’ll be interesting to see how they do.

Valour FC did not release the length or financial details regarding the contracts for either signing.