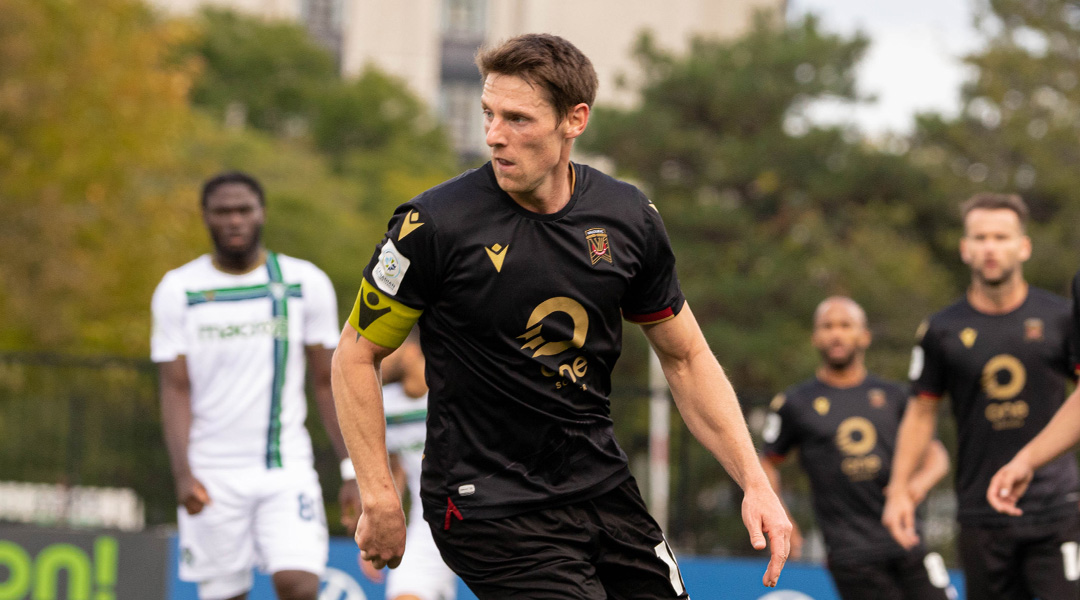 Valour FC Captain Daryl Fordyce has announced his retirement following a career on the pitch that has spanned some eighteen years, though his next career steps will see him remain at IG Field.

The 36-year-old from Northern Ireland made 59 appearances for Valour FC across all competitions. He arrived to Winnipeg in 2020, with the versatile veteran ready to adopt a utility man role wherever the club needed him. Establishing himself as a leader both on and off the pitch, he co-captained the side through two more seasons before his body told him it was time to hang up his boots.

“I was crying my eyes out,” he explained to Valour’s Ed Tait after his retirement became official. “I’ve been a pro for twenty years and so this obviously not an easy thing to do. It was twenty years of emotions from all the mental and physical work I’ve put in and realizing, ‘that’s it.”

Fordyce had considered retiring prior to his final 2022 CPL season, but had been convinced to undergo ‘one last dance‘ as the club sought its first-ever playoff appearance. Valour finished one spot below the playoff qualification, with Fordyce’s final appearance seeing him receive a red card against his former side FC Edmonton.

It was an unceremonious end to a storied career that saw the versatile professional play for a variety of clubs across England, Northern Ireland, and North America, rising through the Rangers academy before his playing career saw him land with the likes of Portsmouth, Bournemouth, Glentoran, Linfield, FC Edmonton, FC Cincinnati, Sligo Rovers, and Valour FC.

He finishes with over 350 professional appearances to his name, and will go down in history as FC Edmonton’s top goalscorer of all time with 34. It was during his time with the Eddies when he earned his permanent residency, a move that further opened the doors for him to return to Canada when he signed with Valour from the Sligo Rovers in 2020.

2008 Flashback: Fordyce Has ‘License To Thrill’ At The Oval

From a UEFA Cup qualifier that saw him play against Karim Benzema to winning his domestic Northern Irish league with Linfield, he’s seen and done aplenty. At 36, the pragmatic professional felt the time was right to step down and let a younger player assume his spot on the pitch.

“In making the decision, I had to determine what’s best for me and the team going forward,” said Fordyce. “If Phil wanted to keep me around, I could have been a bit-part player, but that’s not my character – anything I do, I have to be full-in on it. And it’s not the best option for the club if they can bring in a younger, better version of me to make the team go further and I think they can do that. So that’s how it is.”

The former Northern Ireland youth international knew the time was approaching when he suggested a change in the squad that saw a younger take his spot on the pitch for a spell, but moreso he attributes it to the notion that ‘Father Time is undefeated’ – the turf pitches seen in the CPL aren’t as easy on the knees as a natural grass surface, and they were catching up with Fordyce.

“After playing 90 minutes, for two days afterward I was struggling to get going again,” he revealed, specifically noting how difficult it was to do things like take his young child out a day after a match.

The 36-year-old will now transition to a new chapter of his life off the pitch, joining the club’s staff in a role focused on player development. Always forward-thinking, he started earning his licenses some 18 years ago, now holding his UEFA ‘A’ license as he embarks on a new career chapter.

His family is equally settled in Winnipeg, too: his son Luka is due to start Kindergarten this fall, and his wife Christina is enjoying her work in the city. She’s stuck with him through all of his club transfers in England, Northern Ireland, and North America, and Winnipeg as the final stop makes a lot of sense for them both.

“I’ve been here for three years and I have a love for Valour, there’s no doubt about that,” he said. “I see the progression each year I’ve been here and how close we are to make the playoffs. I’ve seen the fans grow, especially in our last game where it was up to the 5-6,000 mark. I see the high-performance program that has been set up and can grow throughout the city.”

“Now, someone is going to ask me after the first game if I’m going to miss being out there,” he concluded to Ed. “The answer will be, ‘of course’ but am I ready to move onto something new? Yes, one hundred percent. I’m a realist. I know I can give a certain amount on the pitch, but it’s not enough for what the team needs going forward.”

Even in his own retirement, he’s putting the team first – if that isn’t Fordyce, nothing is.