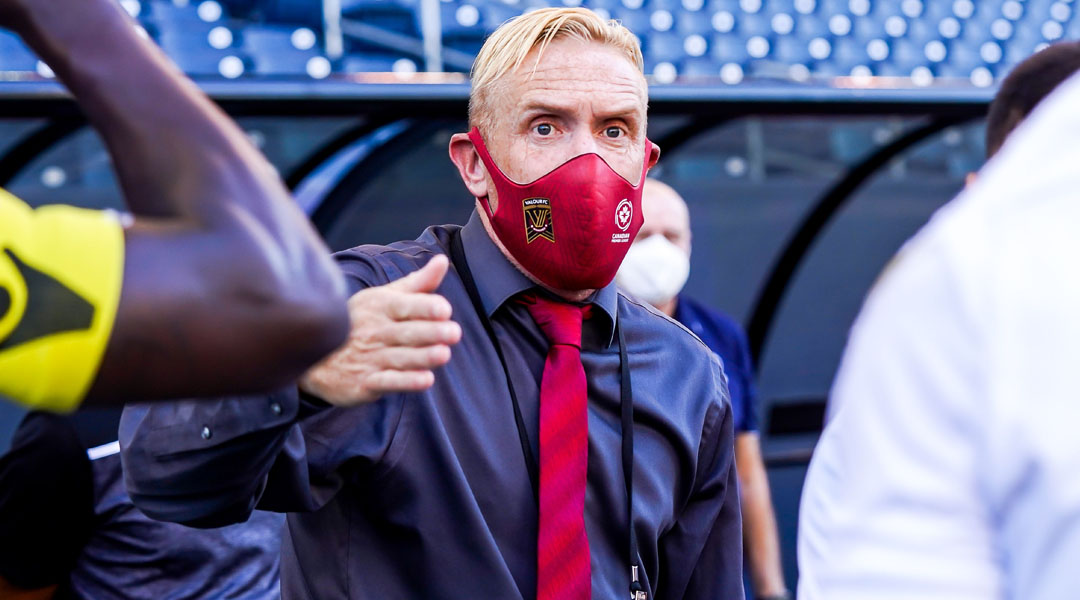 Valour FC may have opened its 2021 Canadian Premier League campaign with wins against both of last year’s CPL Finalists (while recording the club’s first-ever back-to-back wins, no less), but head coach Rob Gale isn’t satisfied yet.

Speaking with media after the match, the Valour gaffer was quick to make clear that last night’s game was far from perfect: from his view, the team relied on goalkeeper Jonathan Sirois too many times, and gave the ball away too easily in the first half.

Still, last night saw the club come out 2-0 victors over a Halifax Wanderers side which he hailed as ‘the best counter-attacking team in the league’, and while Valour remains tied for first after two games played, he says improvements must be made to meet his expectations for the side.

We’ve had two games, that’s it. Nothing more. We haven’t played nearly to the capabilities that we want to, or the quality of football that I demand of my football team. We’ve got a long way to go, and a long way to improve. […] By no means are we contenders, we’ve massive underdogs. We’ve only beaten the two top teams from last year, and we’ve got a long, long way to go yet.

Still, Gale hailed the character which his team showed last night, stating that they showed a willingness and desire to secure the result along with a desperation to defend. The Halifax Wanderers let loose an astounding 25 shots at IG Field last night, only eight of which ultimately went on target, and none of which went beyond the club’s goalkeeper on loan from CF Montreal.

The perennial underdogs find themselves oft-overlooked in power rankings and predictions, but have now opened the campaign with two straight clean sheets and four goals for. For Gale, it shows a collective effort to silence the doubters – something Austin Ricci did against the reigning champions a few days ago.

There’s a general chip on their shoulder – we’ve got a bag of potatoes. They want to prove everybody wrong, and winning silences the noise and silences the doubts. It doesn’t matter how you do it, sometimes like today – like I’ve said before – it’s the odor of football, it covers all off the smells.

The end result of tonight’s match was the reverse result of when the two side’s met at the Island Games, where the Wanderers saw out a 2-0 victory in PEI. Gale says there wasn’t actually much difference between the two games: this time it was a Wanderers centre-back going down injured and not Valour’s, and a bounce or two went his way instead of Halifax’s.

With an analysis like that, it’s no surprise that Gale is keen to keep his team level-headed. Like Alan Koch did last week, he hailed his team as underdogs for the season a whole.

Last night saw the club take an early lead through centre-back Andrew Jean-Baptiste after twenty minutes played, with Gale adamant that the Haitian defender is clearly capable of playing at the MLS level – and likely deserved a call-up to Haiti’s Gold Cup team, too.

The Valour defender also spoke with media after the game, where he was quick to echo Gale’s mantra of keeping both feet firmly on the ground:

Last year we had a good team, and this year we improved in a lot of places. These two wins are meaningful. They mean a lot. I’m sure they send a message to the rest of the league. However, it would be naïve to sit here and think we’re on top of the world after just two matches. It’s best that we stay level-headed, composed, and work hard to fix any of the little discrepancies that we may have.

While Halifax put on a lot of pressure after going behind, the insurance goal – and Gale’s opportunity to breathe – came one minute from time through rookie forward William Akio, who fired in a fine ball beyond Christian Oxner to seal the result.

The club now faces yet another short turnaround before it faces off against Atletico Ottawa on Saturday. With several players already picking up knocks through both the first and second matches (Gale couldn’t even fill his bench last night), we asked the head coach if high-profile Brazilian signing Rafael Galhardo may be included as soon as this Saturday now that his quarantine has ended:

It’s a tough, tough ask after a short, short preseason. If he’s got a warm pulse and he’s feeling it, he might well feature. I didn’t have 18 players tonight, so if I can get him out there and get something out of him, maybe he’ll be the next Baquero for me and step up and play all the minutes.

With Valour FC now second in the table behind Cavalry FC on goal difference, it’s clear that the Winnipeg-based side are looking like a force to be reckoned with through both the bubble tournament and the 2021 Canadian Premier League season as a whole. The tough losses in 2019, truly, feel like a distant memory right now.

With players like Raphael Ohin, Andrew Jean-Baptiste, and Jonathan Sirois starting off in hot form, the host side is likely raring to go against Atletico Ottawa this Saturday – especially given that they beat the team 4-0 last year, with the expansion side now coming off of a 4-1 loss against Cavalry last night.

Valour FC’s match against Atletico Ottawa will be available live on OneSoccer.