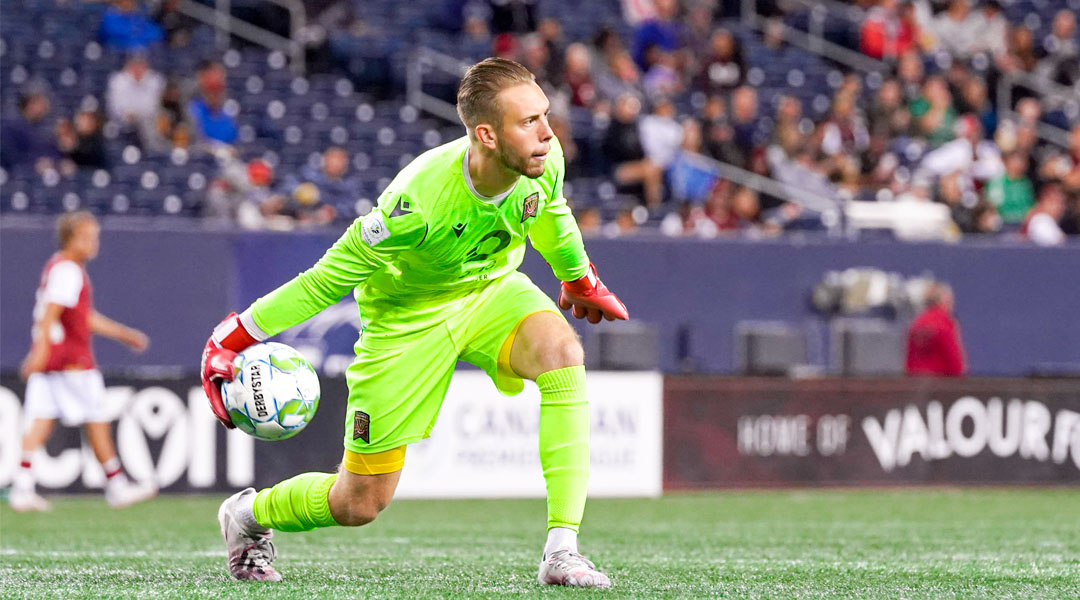 It’s been quite a year for CF Montreal loanee Jonathan Sirois: the 20-year-old got his professional debut while on loan with Valour, carving out a starting position for himself amidst some blistering form that led him to feature in 24 league matches throughout the year.

With an impressive rookie season now concluded, Sirois picked up the 2021 Golden Glove award following a campaign that saw him lead the league with nine clean sheets, six of which came during the month-long bubbled segment of the season.

Sirois bested Forge’s Triston Henry and Cavalry’s Marco Carducci for the award, each of whom had won it in 2020 and 2019, respectively.

While Valour underwent some tough times outside of the bubble before just barely missing out on a playoff position, the adventure proved to be a big learning experience that Sirois will carry with him.

“There were a lot of ups and downs,” he said at the awards ceremony, “but I’m very happy and honoured to receive this award.”

He becomes the first MLS loanee to win a CPL Award, with the Inuit soapstone carving for the Golden Glove being inspired by the Qimmiq, a strong arctic dog that acts as a loyal protector of the community.

Valour’s Julian Dunn – a Toronto FC loanee at the time – was nominated for a U-21 award last season.

On the stage, Sirois was quick to credit the place he’s called home for the last six months as a big reason for his individual success:

I’d like to thank Valour for giving me the chance to start my professional career, to get some playing time, and especially big thanks to Patrick [Di Stefani]. We did a lot of hard work together throughout preseason and all of the season. Big thanks to all of my other teammates, because I may have won this award, but it’s teamwork. If I had the ability to shine, it’s also because of them.

Born in LaSalle, Quebec, the 20-year-old developed at CS St-Hubert prior to joining the Impact Academy in 2015, where he developed through the age groups and signed a professional contract last year, becoming the 18th academy product to reach the first team.

Sirois nearly made his MLS debut in unusual circumstances in 2020, with the Whitecaps signing him on a one-day emergency loan during the MLS-Is-Back Tournament: third choice goalkeeper Thomas Hasal was the only one available for the side, while a string of circumstances left the league’s emergency pool keepers unavailable. Sirois rode the bench, but wasn’t needed.

Ahead of the 2021 campaign, Sirois felt that he had ‘no chance’ of getting any playtime behind Sebastian Breza, James Pantemis, and Clement Diop, so the opportunity to play on loan with Valour came as a much-needed opportunity for playing time.

I think the CPL is a great league to get minutes in. As a young player, it’s crucial to get your minutes in because that’s how you get experience. You make mistakes, and you get better. That’s also how you get confidence. This year really gave me some confidence, and that’s a vital step in my career.

Sirois had no way of knowing that the 2021 season would see him become such a standout: when he first set out to Winnipeg, he wasn’t envisioning a rookie campaign that would end with a soapstone carving and a league-leading number of clean sheets. He just wanted to battle for a starting spot with the sole purpose of carving out as much playtime as he could.

Throughout the year, I actually got that. I played a lot of games, big number of minutes, and got to experience a lot of situations. Of course, I made a few mistakes, but that was expected and that will help me grow as a player also. If I look back throughout my whole season, I’m just very happy because the goals that I put out for myself are achieved.

Sirois got to experience 2,160 minutes on the pitch with the CPL side, recording two penalty saves and leading the league in saves with 94. CF Montreal even briefly recalled the youngster to ride the bench during a scoreless draw against FC Cincinnati while James Pantemis was out due to COVID-19 protocols.

Pantemis, of course, had used an impressive loan spell with Valour FC in 2020 to catapult himself into first team playing opportunities of the MLS side. Sirois hopes to mimic that success now that the MLS side has activated his contract option.

“I will try to battle to get playtime over there,” he says, “nothing is guaranteed, and there’s some very good goalkeepers over there which want the same thing as me. It’s going to be very tough. I can’t expect to have anything given to me, I have to work for it again, and that’s what I plan to do coming into the 2022 season with Montreal.”

When James Grossi asked what advice Sirois would give other academy players who have an opportunity to play in the CPL, he didn’t hesitate in his answer:

“Take it,” he urged, “if you’re an academy player or a young player, take that chance whenever you can. Don’t wait too long, because some chances might pass by you, and you want to get that experience as young as you can so that you can get into your prime as early as possible.”