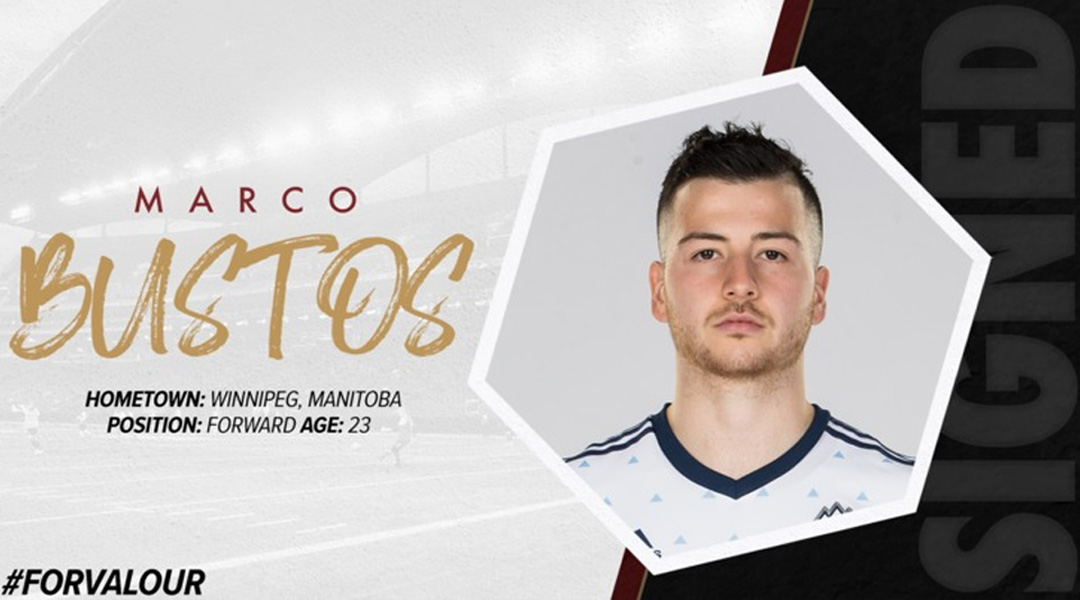 Valour FC head coach Rob Gale hinted that a big signing might be coming up today, and boy did he deliver: the Winnipeg-based side has now revealed the signing of Marcos Bustos.

The 23-year-old attacking midfielder is a young Canadian with strong ties to the province. Born in Winnipeg, he was a member of the FC Northwest youth system before joining the Whitecaps Academy ranks in 2011. He would go on to make some 57 appearances for the USL-based Whitecaps 2 side, registering an impressive 22 goals in the process.

Bustos couldn’t break into Carl Robinson’s first team plans, however, and made just 4 league appearances for the Vancouver Whitecaps before moving on loan to Zacatepec of Mexico’s second division. Last August, his contract with Vancouver was terminated by mutual consent and he joined OKC Energy in the USL. Today marks a jump homewards to the Canadian Premier League, an option which didn’t exist before this year.

I am delighted to bring a player of Marco’s calibre into Valour Football . Along with our two Dylans, I have very fond memories coaching Marco from a young age. He has blossomed into a dynamic attacking player whose goal-scoring creativity will excite the Valour Army.

Bustos has also appeared for the Canadian national team no less than 6 times. When he was part of the U-20 setup in 2014, he had played under Rob Gale.

The history between the two has now led to a fantastic capture for both Valour FC and the Canadian Premier League as a whole, and Bustos will feel like he has plenty to prove after coming so close to breaking into the MLS.

At 23, he’s got plenty of time to improve, too. Gale signed him to a multi-year contract, though financial details were not released by the club.

Bustos becomes Valour FC’s 22nd signing, and he’s certainly not the first young Canadian to sign for the Manitoba-based team who brings in MLS experience. Valour FC recently inked both Louis Béland-Goyette and Michael Petrasso, both of whom played for Montreal Impact before making the jump to the CPL.

Suffice to say, the Valour FC roster is looking good – but like many other clubs, its depth will be tested as the season continues. Luckily for Valour, that goes both ways: when the club travels to Hamilton on May 12th, the home team will be without the likes of Kyle Bekker due to a multi-game suspension.

Bustos has arrived in Winnipeg and will not be available for the game against Cavalry FC on May 8th.