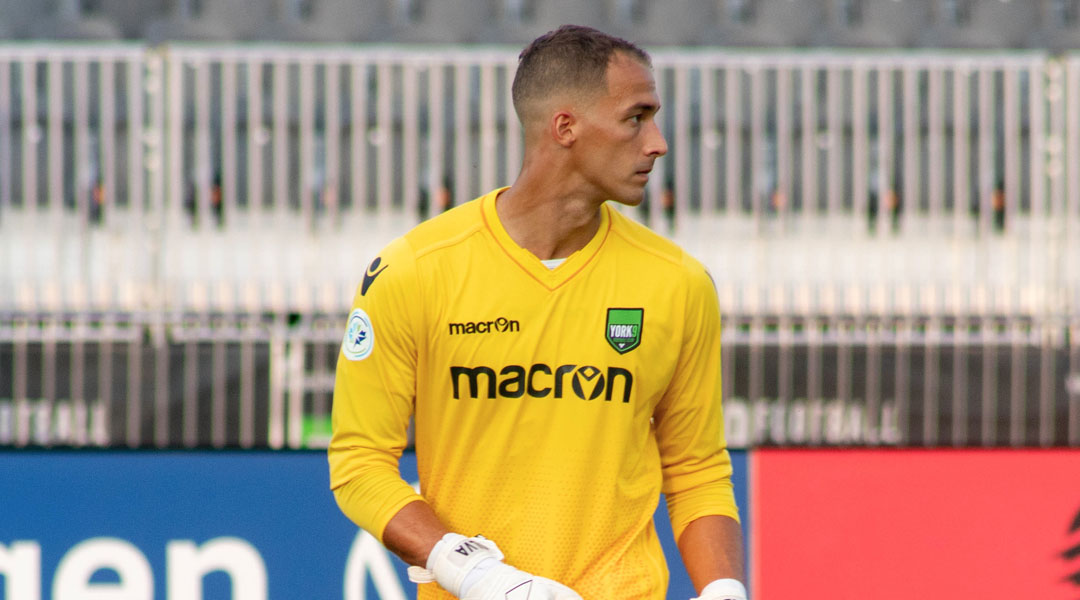 Valour FC head coach Rob Gale has already revealed that the club has made three new signings, though the gaffer wouldn’t mention who was brought in just yet. Of the three new arrivals, no one has been more oft-linked than former York9 FC goalkeeper Matt Silva, who parted ways with the Nine Stripes after only making one appearance behind Nathan Ingham last season.

The 29-year-old goalkeeper had returned to Canada in 2019 following several seasons abroad, during which Silva made 68 appearances in the Swedish second division after a season-long stint in the Philippines. Prior to that, he had played closer to home with the likes of CSL sides North York Astros and SC Toronto, along with former PDL side Toronto Lynx.

Today, photographs of Silva’s arrival to Winnipeg were made public courtesy of his dog’s social media account, suggesting that he will begin training with the Valour FC squad in the near future:

Valour FC parted ways with Belgian shotstopper Mathias Janssens earlier this year, with emergency backup goalkeeper Svyatik Artemenko publicly splitting apart from the team in dramatic fashion just a few weeks ago. Given that the club had brought in James Pantemis on loan from the Montreal Impact, many had expected local goalkeeper Tyson Farago to stay on with the side. Instead, Farago has confirmed to Northern Tribune that he has parted ways with the club, whilst Silva has shown on TransferMarkt as a Valour FC player.

Of course, the club has made no official comment regarding its three as-yet-unannounced signings so far, possibly because the inbound contracts may depend on the formal resumption of the 2020 Canadian Premier League season.


Silva isn’t the only former Nine Stripe who may find himself in Winnipeg, as forward Austin Ricci was previously trialing with the side. While the 24-year-old couldn’t break into a York9 FC squad containing the likes of Kyle Porter and Rodrigo Gattas, he still carries an impressive resume from his previous years: 22 goals and 7 assists in across 71 NCAA appearances, 12 goals and 7 assists in the PDL, and 5 goals in 8 appearances in League1 Ontario.

In Valour FC’s inaugural campaign, the club conceded a league-high 52 goals across 28 games, with Rob Gale undergoing a significant roster rebuild in the offseason as a result. Gale secured the services of high-profile full-back Arnold Bouka Moutou, who will bring plenty of Ligue 1 experience to the Winnipeg-based outfit. The arrival of other internationals like Amir Soto and Andrew Jean-Baptiste, along with the versatility of new signings like Brett Levis and Daryl Fordyce, will give Gale an increased pedigree of depth at the back.


With the Winnipeg-based Canadian Premier League side officially back to training, it remains to be seen if the roster shuffle pays off for Valour FC. The club finished dead last in the 2019 spring campaign, but rose to fifth place in the longer fall season, a mere five points shy of taking third.

It’ll be interesting to see when Matt Silva’s move officially gets announced – assuming the final details of his signing come together – or who else the gaffer has brought in. For now, the club is still quite busy preparing for a modified 2020 CPL season that will likely be hosted by a single province, though Clanachan didn’t want to rule out the possibility of any home matches quite yet.