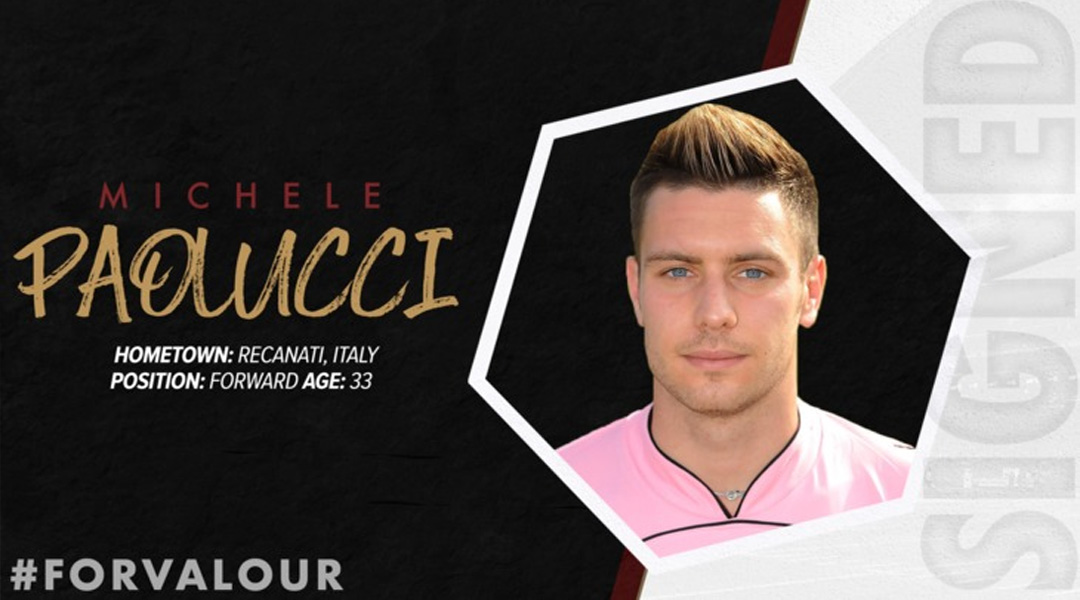 When Valour FC head coach and general manager Rob Gale told media officials that a striker would be signed soon, he really meant it: the club has signed 33-year-old Italian striker Michele Paolucci less than 24 hours after the gaffer’s statement.

Valour FC typically specifies when a contract is multi-year, but didn’t do so on this occasion.

Paolucci was a Juventus academy product who was a highly-rated prospect at the beginning of his career. Having been unable to secure himself regular playing time in Italy’s top flight, he spent the bulk of his career in Italy’s lower leagues, before more recently enjoying a successful spell in the Maltese Premier League.

After signing with the Tarxien Rainbows in 2018, the two-footed striker has scored 7 goals in 11 games – and that’s the kind of finishing touch that Gale has been hungry for.

We are delighted to add someone of Michele’s experience and proven track record to our ranks. He has shown a great interest in our club and the style of football we play, and we feel he is a great addition to our attacking lineup.

The signing of Paolucci means that Rob Gale has filled all 23 spots of the Valour FC roster. The only way to make room for any additional signings would be to either part ways with a player, or put Josip Golubar on the season-ending injury list to clear a roster space for one more signing. In doing so, the Winnipeg-based club would be taking on the replacement player’s salary with no support from the league itself.

Valour FC has been the only Canadian Premier League side to make roster moves during the fall season transfer window so far. The club parted ways with English striker Stephen Hoyle by mutual consent last week, and announced the signing of 20-club man José Galán yesterday.

Elsewhere in the league, York9 FC gaffer Jim Brennan stated that the club would evaluate the situation with Jose Pina being unable to sort out his work permit, indicating that the Nine Stripes may nix the transfer entirely and bring in someone else during the fall window.

With Valour FC signing two 33-year-old players in the last two days, Gale is evidently hoping that experienced players who spent their careers overseas prior to signing for the Winnipeg-based club can help give Valour FC a boost up the league table.