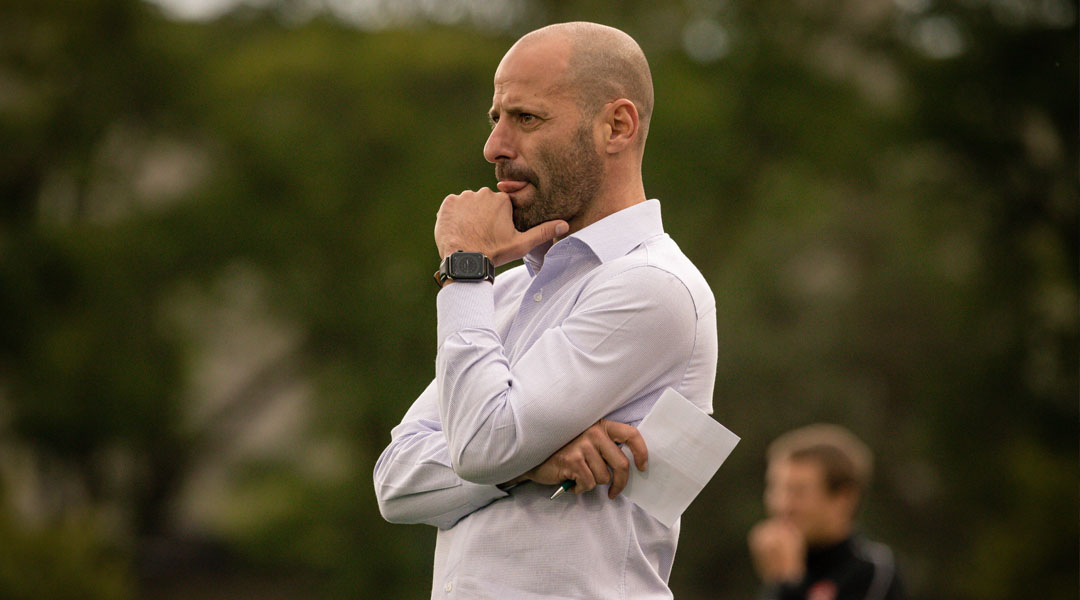 With his first Canadian Premier League match under his belt, new Valour FC head coach Phillip Dos Santos has now had a chance to closely assess the squad he’s now tasked with leading into playoffs.

Valour fell to a 2-1 away loss to York United, with both sides seeing numerous opportunities to attack.

The new gaffer was clear that his first match in charge was all about getting a close look his players now that he can see them competitive action, rather than trying to put his own spin on things immediately.

It’s hard to evaluate the team and personnel when you’re far. I think that the important thing was to get my feet wet and get to know the group inside the competition. It’s certain that you look at a game like that, and I felt that the match was a bit disjointed at times, a lot of shifts of momentum, and we’re trying to focus on the global but also looking at the individuals.

His first match in charge came amidst a hectic week for the new Valour Man, who was just four days into his first head coaching stint for match number one. Former head coach Rob Gale was relieved of duties last Thursday morning, with Phillip Dos Santos being announced as his successor at the same time.

No head coach who has replaced someone at a CPL club has started their career off with a win, with Pa-Modou Kah securing a draw while Alan Koch began his Eddies career with a loss.

Phillip’s first match in charge had started well, with midfielder Brett Levis scoring his first CPL goal by procuring a well-placed shot that snuck into the lower left side of the net. The 28-year-old reflected on what was been a difficult week overall for the side, which rued a lack of lethality after landing nine of eighteen shots on target last night.

It was a quick turnaround, obviously. We found out mid-week. The result is obviously not what we hoped for. That’s on us, regardless of who the coach is. That’s on the players. I thought the effort was there. I thought we lacked the finishing touch and the organization, but that will come.

Dos Santos made it clear that he had told the players his first match in charge was not about him: he didn’t want them adding extra pressure to themselves, and so had told them to go out and simply play their game. While the result slipped away, his initial thought is that the core mentality of the group is good.

If there’s a positive I take out of that it’s the competitiveness that the guys showed, and their desire to do well, and the fact that I was able to assess the individuals and see what they are about and see what they can do in situations that are difficult. That’s where I need to keep my mind, and say ‘okay, this is the platform we have, and where do we go from here to grow’, and that’s how I’m going to go about it.

Those difficult moments on the pitch occurred frequently for both sides, with Dos Santos describing yesterday’s end-to-end action as fairly stretched and chaotic, a byproduct that he suggests is the result young players on the pitch who want to move forward quickly and don’t understand the moments of the game, like when to slow it down or when to accelerate. As coaches, he says, there’s a lot of work to do in that regard.

It was youngster Lowell Wright who proved to be Valour’s undoing, with the 18-year-old bagging a brace in the second half to secure three points for the Nine Stripes, granting them some crucial breathing room for their playoff spot.

A win for for Valour could have seem them sneak into fourth place on goal difference instead. For Levis, that goal remains both in place and within reach.

It’s been tough, but I think the positive out of it is that the games come so fast and so quick that you don’t have time to process it all at this point in time. All the players are still here who were here before. It was unfortunate to lose Rob, but Phil has come in and we have the same goal that we had in the beginning of he year: that’s to make playoffs, to get in the top four, and make a push for the championship. That hasn’t changed at all.

Phillip has coached at a high level under playoff structures before, having had stints as a technical staff member of the Vancouver Whitecaps, San Francisco Deltas, Ottawa Fury, and Indy Eleven.

Levis is no stranger to Dos Santos, having worked with him during his time at the Vancouver Whitecaps. The familiarity has helped him adjust to the situation, and with such a fast turnaround time between coaches he’s taken it upon himself to help others adjust to the system under Phil.

I knew him and Marc’s system quite well there. I was there for a year and a half with them, so obviously having that past relationship, I can help players and explain certain situations that they’re confused about. It’s always good to have prior knowledge. There’s such a short time frame where these games are coming, so unfortunately he can’t sit down with every single player and explain every single scenario so it’s always good to have a player that has a good understanding of what’s going on.

When Dos Santos was first announced, he was asked what his ideal playing philosophy was. His answer indicated that he didn’t want to give any clichés about always playing an attacking ball: he said a team must know how to deal with the low moments, as well as the highs.

He brought that topic in the post-game conference, suggesting that working defensively as a unit was something that will needs improvement. It’s something Pina was quite vocal about on the pitch, often finding himself without nearby support as York United probed repetitively down the right flank in the first half.

With Dos Santos now having seen the side in action, he was able to see for himself what may have worked, and what didn’t. There are many things to sort out, including the best position for versatile Brazilian standout Rafael Galhardo. Dos Santos is just four days into his tenure, but with nine games left in the season he’ll need to sort out what needs to come quickly, and what can wait.

His decision to jump back into coaching after very little time outside of it separates him from his brother Marc Dos Santos, both of whom departed from the Whitecaps just over a month ago. He revealed that the duo have chatted in the morning, but downplayed their discussions – while they’ve coached together at multiple clubs in the past, this is his own venture, after all.

Still, the Valour FC board took a gamble in bringing him in for the final stretch of the season, with the general feeling being that reaching playoffs is a must to count this season as a win.

Valour had started the season at home in a bubble, taking an impressive six wins from the opening eight games. Unfortunately, the time since has seen them rack up nine losses in twelve games. Perhaps shifting things back in Phillip’s favour will be a stretch of home games in the final stretch of the season, which – if they could replicate their form in the bubble – could prove significant.

At this point, every game is extremely important. Fortunately, we have a stretch of playing three or four home games in a row. They’re going to come quick, every two-three days. It’s just getting our bodies and mind prepared, and tweaking the little things we can in that time frame and getting organized again.

Now that Phillip Dos Santos has his first CPL match under his belt, it’ll be interesting to see what changes come into the fold. As he says, the drive and desire is there, and he’s keen to build on the foundations in place that already work. With nine games left, he has little other choice.

While the fixtures will come thick and fast down the home stretch, fans will expect to see Dos Santos begin to exert his influence over the next few weeks. It’s going to be a wild ride for Valour fans who have witnessed a Jekyll-and-Hyde season thus far.

Valour FC will kick off a four-game home stretch this Wednesday, with three of those matches coming against top half teams.