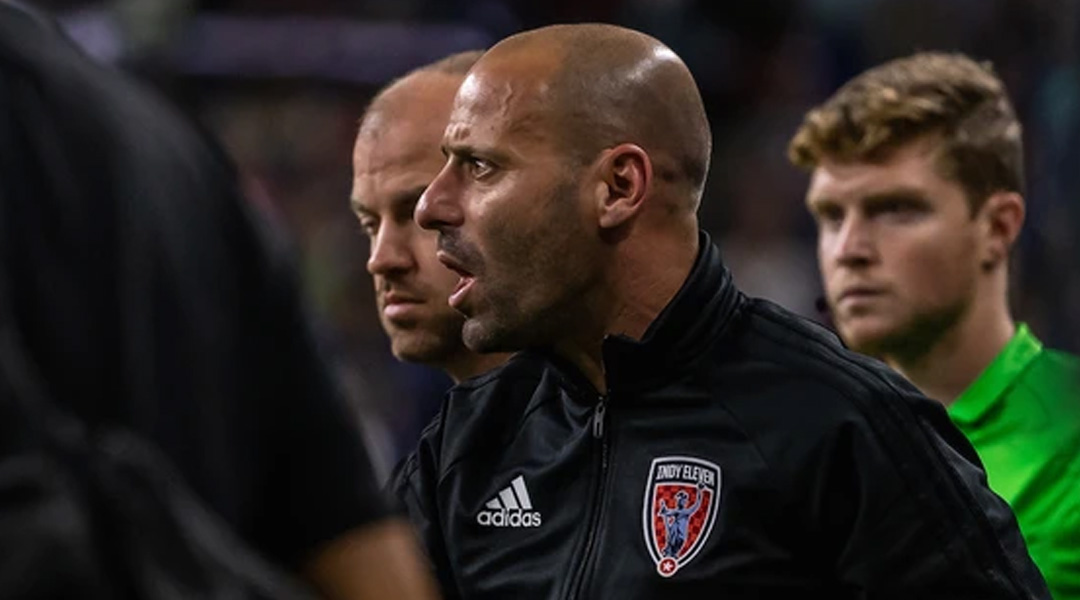 The club’s new hire revealed that he had only been approached by Valour FC just last week, with talks evidently progressing quickly ahead of today’s announcement.

It’s been a busy month for the 43-year-old, who was relieved of duties with the Vancouver Whitecaps just under a month ago and found himself amidst a flurry of phone calls in a situation he admits he’s still trying to process.

That’s the realities of the game. He was out, and now he’s back.

You have to understand that it is part of the process, and it’s part of the game. I tried to keep that to the side and think about what was best for me professionally. The club felt it was the best thing for them as well, and everything happened really quick.

Dos Santos, who was born in Montreal but raised in Portugal, says that he was immediately attracted to the prospect of remaining in Canada for his next coaching opportunity, but noted it was a bittersweet moment given that his arrival came at the expense of Rob Gale, who departs with an overall record of seventeen wins, eight draws, and thirty-one losses across all competitions. He was the club’s first-ever head coach and general manager.

His departure begets an opportunity for Phillip to build on the foundation already within the club, who are making a bold bet that he can usher the club back into a playoff-bound position during his first professional stint as head coach.

Dos Santos refrained from comparing himself to the outbound coach, simply stating that he had presented a vision to the Valour FC board that was a clear fit with the expectations of President Wade Miller and the board.

What was asked from me was to come into an environment and try to make everyone around themselves better. That’s what I’m here to try and do. I don’t want to enter in comparing, that’s not the way to go about it. I think I’m driven, I’m passionate about what I do, and I have a clear idea of how I want to go about things. You need to be firm on what you want to build here, and when this was presented to Wade, I think at the time the board members and Wade saw a fit. That’s how I want to go about it. That’s what I believe it. You never know who is the right guy until he gets on the job and he makes things happen.

The new hire holds a UEFA-A License, and has held numerous coaching roles before: he’s been a go-to right hand man for his brother Marc Dos Santos for years, coaching alongside him at the Vancouver Whitecaps, San Francisco Deltas, and Ottawa Fury. He was also a part of the technical staff at Indy Eleven, too.

While this is his first head coaching venture at the professional level, Dos Santos states that he will not be bringing a sledgehammer approach to the Valour setup: he likes the core foundations at the club, and intends to build around the parts that work rather than rebuild from the ground up.

We need to go step-by-step and not just break foundations that have been good. When it comes to that, the club has something in place and there is value there. We’ll go progressively with it.

The Canadian Premier League side has been in a slump of bad form since it exited the bubbled-segment of the current season, recording just one win, two draws, and nine losses since the return to home markets. The loss of key defender Andrew Jean-Baptiste has been a catalyst in that downturn, too.

Dos Santos spoke with the team for the first time earlier this morning, discussing the responsibility held to both the club and fans. With Valour having finished in the bottom half of the table in its first two seasons and presently bleeding points, the overall trajectory of the club hasn’t been great – though few expected a midseason shift in management.

Despite the circumstances, Dos Santos makes it clear that he believes the club has what it takes to rise back up the rankings, though there are clearly kinks that need to be sorted out.

I look at the group, I assessed the group of players, and I think there is quality in this group. I think there is a mix of age and maturity. […] There is a foundation that has been built, I don’t think you come in with an approach where you could just tear about that foundation. You have to build on that, and we need to have the humility of understanding what is good, what has worked for the team, and what we can add right away to be success in the short-term and then what we want to build going forward.

Dos Santos noted that the club will need find a rhythm and consistency like Forge and Cavalry have done throughout the past three CPL seasons, believing himself to be someone who has the cadence to match the tempo being asked of him.

On that note, he’ll be donning general manager duties along with his inaugural head coaching role, which is a caveat that stems from the realities of a league where staff salaries must total between $350,000 to $550,000. That doesn’t bother Dos Santos.

I understand the general manager side of the job. I think a lot of time in leagues that operate in smaller structures, the head coaching job will come with the GM job. I’m okay with it, it’s familiar ground for me because I’ve been around those types of structures. It was really heading to the next step.

Valour FC currently finds itself fifth in league standings, just one spot away from a playoff spot with under half a season to go. The club had been off to stellar start in the Winnipeg-based bubble, but slid down the rankings as the season progressed.

As one would expected from a new head coach hire in his position, he believes the postseason berth that has eluded the club so far is attainable this season.

We know we’re in a good position, I don’t think that was the question. The team is in a position where we have a game in hand and we play York this weekend, so it’s a position where everything is on us to make it.

The CPL isn’t completely uncharted territory for the new boss: he’s been on the sidelines against Canadian Premier League opposition for two rounds of cup matches in the past, noting that his first-hand impression of quality on the pitch was good.

On a larger scale, the former MLS and NASL coach believes the league itself on the rise, too:

I think it’s a growing league, and that was one of my questions when I was talking to Wade and other people related to the league. I have a feeling of its growth and how solid it has been, and in just two years that were so complicated, and seeing how they managed to hang on and keep pushing to grow despite circumstances, it is a sign of growth, no doubt.

Echoing the words of his brother on the subject of a lack of opportunities to Canadian coaches, Dos Santos notes that with just eleven professional football teams north of the border, it’s a highly competitive market to enter, which further drew him into the role. The league sees an even split between foreign-born and domestic coaches.

For Phillip, the time to test himself as a head coach had come, and he wanted to grasp it firmly.

I felt this was the time for me, and I believe that I’m a better person at 43 for this job: more prepared, more experienced, I’ve seen more in the job and my management of people to get the maximum of individuals.

Dos Santos has been digging through the matchday tapes from the side, stating that he and the technical staff (Damian Rocke and Patrick Di Stefani will remain with the team) will work with the players to maximize their potential and start things off on the right foot.

When asked about his preferred philosophy, he avoided what he describes as an idealistic, cliche answer, though he did offer a taste of the mentality he’s going for: he wants a team that understands the fluidity of the game, who want to be on the ball and show aggression both in and out of possession.

He offered Twilight as an example.

You guys at familiar with the Twilight saga, no? When you look at someone and you see the vein pumping and the energy of wanting something and really feeling the person, that’s what I want to see in the players: playing with energy, and those types of behaviors that are aggressive, hard to beat, and to play against. Every day you know that if you play Valour, you’re up for a fight, that’s what I want us to be about.

Phillip Dos Santos becomes the fourth head coach hire to come in after the inaugural season was underway, behind Pa-Modou Kah, Mista, and Alan Koch.

While it remains to be seen how his first head coaching stint turns out, Wade Miller has put a lot of faith in what came as an unexpected mid-season coaching change. Making playoffs will go a long way in justifying the decision.

For Dos Santos, the work behind the playoff push has already begun. “We’re still in the running, and we can still make it happen,” he assures fans, “It starts on Sunday.”