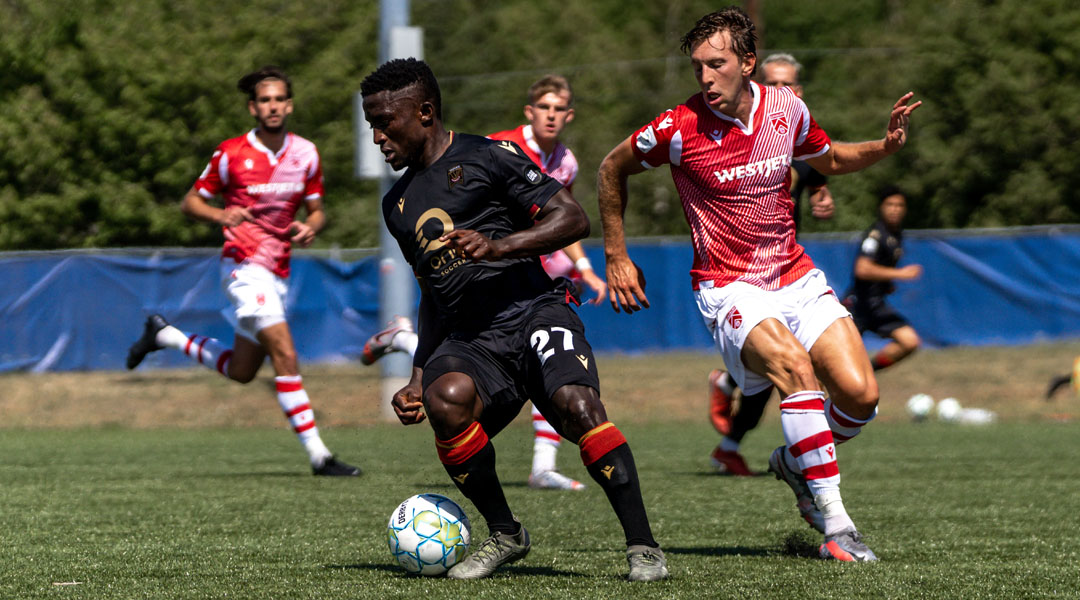 Canadian Premier League side Valour FC has announced that 25-year-old defensive midfielder Raphael Ohin has been re-signed by the club.

Ohin becomes the first inaugural season member to confirm that his stay with the side will extend into its third year, with the 25-year-old having taken the step up to the professional level after joining from PDL side WSA Winnipeg (now FC Manitoba) in January 2019.

With 29 appearances for the side, he’s the club’s third all-time appearance leader behind Diego Gutierriez and co-captain Dylan Carreiro, who recently left the side.

Here’s what head coach Rob Gale had to say about Ohin’s return:

We are delighted to have Raphael back with us and to continue his development in Winnipeg. He’s shown discipline, tactical precision and has committed to improving his game. He’s a great role model in the community and is a popular figure with staff and players.

Ohin proved to be a crucial player during the club’s impressive Island Games outing, featuring in all seven of Valour FC’s games. After the bubble tournament kicked off, we were quick to name him as the side’s best returning player.

Born in Ghana, the 25-year-old developed in his home country prior to spending his academy days in Switzerland, Thailand, and Sweden before arriving to Canada.

Having been a part of the inaugural season squad that generated plenty of rumours regarding a troubled locker room atmosphere, Ohin says that the 2020 season showed a much improved team chemistry:

There were no fights, no misunderstandings. It was peaceful. Our coaches made sure we were always in the right mind, doing the right things and always ready. It was such a short season but after it was done I was telling people that if the Valour board can bring back most of the players next year we are going to be way different. This will be a team that can cause problems in the league because you could see the chemistry building. I’m excited to see so many of the guys coming back.

The Winnipeg-based club has already secured the return of key defensive addition Andrew Jean-Baptiste, with the likes of Masta Kacher and Brett Levis also re-signing after impressive debut seasons with the side.

While veteran Spanish midfielder Jose Galan is currently playing in Spain, he made it clear that he intends to return to the side next year, too. All told, Gale says he expects his core squad to be back for 2021 – though whether the MLS loanees will return remains in question. With Pantemis impressing in the MLS, that return looks less likely.

Valour FC did not disclose the length or financial terms of Ohin’s contract.