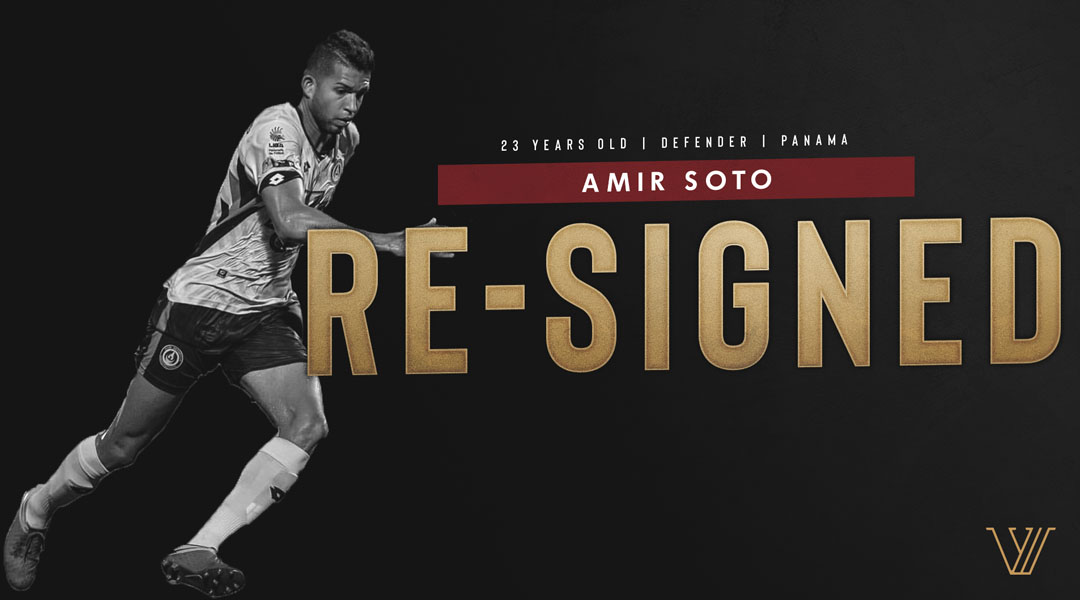 He may not have been able to participate in the Island Games this year, but Amir Soto has still been re-signed by Valour FC for the 2021 Canadian Premier League season.

The 23-year-old Panamanian centre-back was expected to compete for a starting spot at the heart of a much-transformed Valour FC defense. Prior to signing on with Valour FC, the defender had experience in the Panamanian top flight with CD Universitario and Atletico Nacional, and in the Danish second division with Ringkobing IF.

He received a national call up from Panama in 2018 ahead of a friendly match against Venezuela, but never got a chance to make his debut. Earlier this year, he revealed that a good showing in the Canadian Premier League could reanimate his national team hopes.

With Valour FC having zeroed in on the defender after collecting information from the league’s shared scouting database, Gale is confident that Soto will impress when he ultimately gets his chance:

We are delighted to welcome Amir back to the club this season. Amir bought into the culture and showed his commitment to the club despite not being able to participate in the 2020 season. His ability as a CONCACAF International level central defender will be a great addition to the club and the league as a whole.

Soto originally signed for the club back in February and was expected to arrive in early April, but the COVID-19 pandemic delayed his visa processing. It was only just as the side returned from Prince Edward Island that his visa was approved.

The Island Games campaign saw Andrew Jean-Baptiste and Julian Dunn combine to become quite a formidable centre back duo. While Jean-Baptiste had his contract exercised for the 2021 season, it’s unknown where Dunn will end up next year – so it makes sense that locking in a six-foot-two centre back was high on Gale’s priority list.

Each of the re-signed Valour FC players have ample positives to say about the new, positive locker room atmosphere at the Winnipeg-based side, and Gale revealed in a chat with Ed Tait that Soto also played a big role there despite not being in the country:

He was on every Zoom call, every video chat. He joined us virtually in the bubble at the Island Games. A couple of times we called him up from (PEI) and involved him in team meetings. He also contacted us after the first game and gave a talk to the boys about our next game. He was with us every step of the way and that takes a special character to stay that connected when he was waiting and waiting and waiting for so long to be a part of it and then ultimately he realized he was not going to be a part of it.

Soto becomes the second international athlete to re-sign with the side ahead of the 2021 Canadian Premier League season, behind fellow defender Andrew Jean-Baptiste. Gale has moved quickly to ensure the return of other 2020 additions like Stephen Cebara, Masta Kacher, and Brett Levis, while inaugural season squad member Raphael Ohin has also signed on for another year.

While he hasn’t put pen to paper just yet, Spanish veteran Jose Galan has also informed fans that he intends to return to Valour FC next year following an offseason spell in Spain.

The Panamanian defender isn’t the only international who missed out on the 2020 campaign to re-sign with a CPL club today, with Cavalry FC having announced the re-signing of Honduran midfielder Jose Escalante this afternoon.

It’s not ultimately clear who will tend to the net behind Soto and Jean-Baptiste next year: Iron Man James Pantemis impressed in net at The Island Games, but his sharp performances for the Montreal Impact make it unlikely that the Montreal-born goalkeeper will be available next season. At the moment, it’s unclear if Matt Silva will be returning for the side.

Valour FC did not disclose the financial compensation of Soto’s contract.