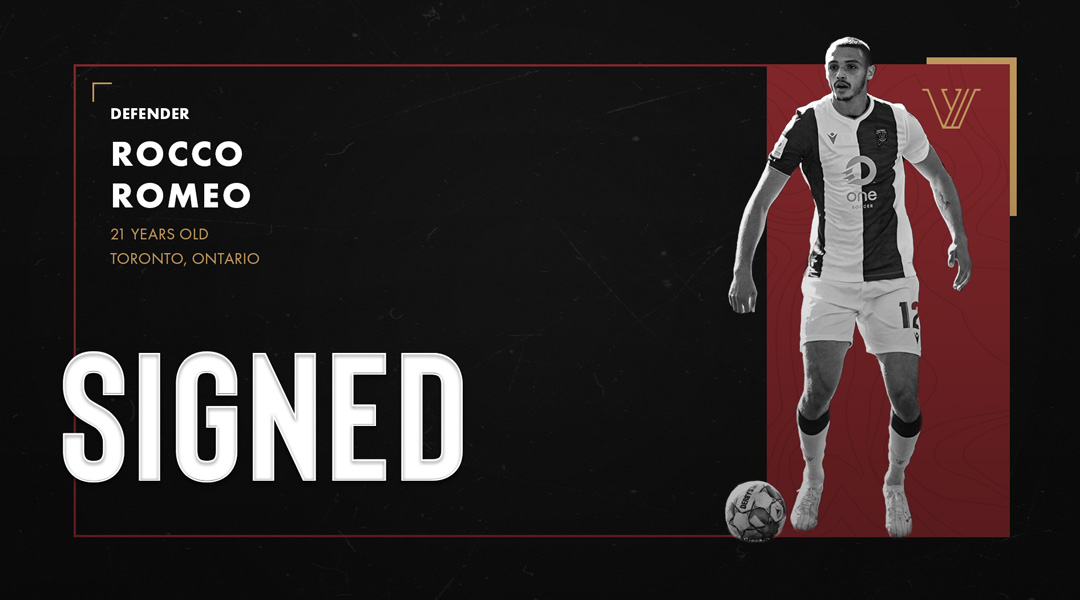 Canadian Premier League side Valour FC has signed centre-back Rocco Romeo, who previously spent time on loan with the side through Toronto FC in 2021.

The 21-year-old made 18 appearances for Valour FC last season, with the six-foot-four defender arriving mid-season to fill-in for Andrew Jean-Baptiste.

He also contributed two goals during his first stint of CPL action, too:

Having evidently impressed whilst on loan last season, it’ll be interesting to see how Rocco acclimates to a full season of Canadian Premier League action following his departure from TFC. He had been in the club’s pipeline since 2014.

Rocco is extremely passionate and plays with passion and determination. He’s an extremely positive influence in the locker room and has a huge margin to grow and progress. He’s a fantastic professional and we’re excited to see him grow in this environment.

The TFC Academy product eventually made 33 League1 Ontario appearances with TFC III before turning professional and making 25 appearances in the USL with TFC II. He also spent a spell on loan with Danish top flight side HB Koge, making eight appearances.

Toronto FC then signed him to a first team deal in January 2020 before sending him on a second spell with Koge, and then loaning him to Valour FC in the subsequent season.

The Winnipeg-based side has retained the bulk of its central defensive core , with Phillip Dos Santos already securing the returns of Andrew Jean-Baptiste, Stefan Cebara, and Tony Mikhael.

Dos Santos says that the ample competition in the centre-back position means Romeo will need to be consistent if he’s to collect minutes in the CPL.

Once he starts finding that, he has extremely good qualities on the ball, he’s good in the air, he’s got an athletic side to him… he has a lot of good tools for a centre back and comes from a great academy system that educated the player on what it takes to be a pro. He’s got a lot going for him

Romeo, for his part, says he likes the philosophy and mindset shown by the new Valour gaffer, pointing to the club’s near-hit playoff push in 2021 as evidence of its potential success.

With Valour capable of giving him competitive minutes in a high level environment, he’s keen to elevate himself and grow his game with the Winnipeg-based side.

I’m still young for a centre back. I have to pay my dues and get more experience at my position because it’s a position where you have to be very reliable, and the team has to trust you.

Like many other current Valour athletes have expressed, Romeo believes the side has what it takes to reach playoffs for the first time in club history and go for a North Star Shield win.

“I’m a very competetive person,” he states, “and I want to win championships. That’s just in my DNA.”

The length and financial terms of Romeo’s contract with Valour FC were not disclosed by the club.