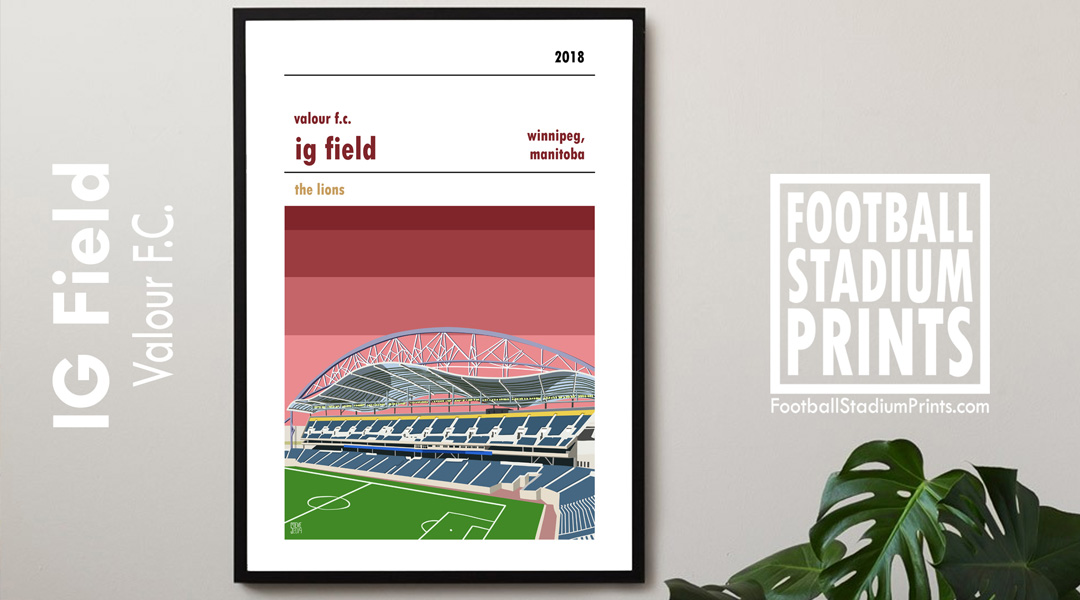 Valour FC’s home stadium in Winnipeg, Manitoba is a work of art – and it just inspired another.

This is the second Canadian Premier League stadium that Stewart has drawn, having done a fantastic piece on Tim Hortons Field in the beginning of the month. Stewart crowdsources which stadiums to draw next, conducting polls on Twitter to gauge fan interest. In Valour FC’s case, the winning poll saw them take 60% of the vote between Grand Rapids FC (31%) and the Flint City Bucks (9%).

IG Field opened its gates in 2013, and has served as home to CFL side Winnipeg Blue Bombers ever since. The same ownership group behind the CFL club also owns Valour FC, so having both sides play out of the 33,234-capacity stadium made sense – it’s the same thing that Forge FC co-founder Bob Young does with the Hamilton Ti-Cats, too.

Stewart’s rendering of IG Field certainly does the stadium justice. He captured the complex curvature of the stadium’s roof quite well, and the geometric design of the support beams above it has been recreated with great accuracy.

Valour FC fans interesting in picking up a copy of this print – which can come on everything from a poster-sized print to a t-shirt – can visit the Football Stadium Prints website here. Fans who subscribed to his Patreon will have already seen his work-in-progress sketches for the Winnipeg-based stadium, too.

Having now covered two different Canadian Premier League homes, it’ll be interesting to see if the Scottish artist continues his foray into the league. Given that most of the stadiums are still undergoing construction as they expand to meet CPL crowd sizes, it might be a bit of a wait until more CPL clubs are covered.

If Stewart’s work on the past two stadiums is any indication, though, it’ll be well worth the wait.