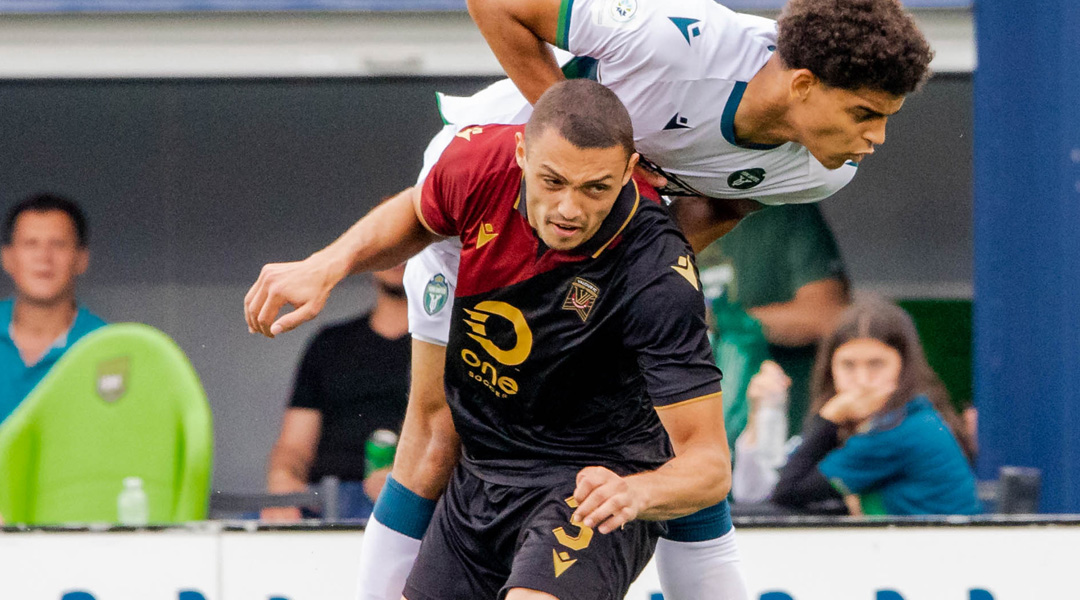 The Canadian Premier League’s newest club has secured a sizeable defensive addition with Rocco Romeo, who arrives from Valour following the expiry of his contract.

The big centre-back now joins Vancouver FC as the club’s sixth signing, where he’ll be expected to help lead the VFC backline through its inaugural campaign.

The 22-year-old made 42 appearances for Valour throughout the last two seasons, cementing himself as a sturdy centre-back who dominated aerial contests with his six-foot-four frame and proved to have a good eye for the forward pass, too.

His last season with Valour saw him lead the side for clearances, though his physical nature also saw him procure quite a few yellows, too. In-all, he arrives to VFC as a young defender already established at the CPL level who still has plenty of room to grow.

“Rocco will bring consistency and presence to our back line and leadership to our locker room,” said Vancouver FC head coach Afshin Ghobti. “We are pleased to bring in another player who understands the league and what it takes to be successful, and we look forward to helping Rocco continue his development in this next phase of his career.”

Romeo will also prove a presence on the other end of the pitch, having scored four goals for Valour FC throughout the last two seasons, the first of which saw him arrive to the league as a TFC loanee.

The Toronto-born defender began his career by progressing through the TFC youth system, making 33 League1 Ontario appearances with TFC III before turning professional and making 25 appearances in the USL with TFC II. He also spent a spell on loan with Danish top flight side HB Koge, making eight appearances.

“As we continue to build out our squad ahead of our inaugural season, we are looking for players who can help us be competitive from the first whistle,” added VFC President Rob Friend. “Rocco not only fits that bill, but we believe there is even more to come from him as he continues to grow as a player.”

Romeo becomes the first defender recruited by the side, which had also secure intra-league moves for Callum Irving, Elliot Simmons, and Mamadou Kane before bringing in young talents Kahlil John-Wentworth and Nathaniel St. Louis last week.

His former side Valour FC will field quite a different backline this year, with Abdou Samake recently joining from Pacific.

The length and financial details of Romeo’s contract with Vancouver FC were not disclosed by the club.