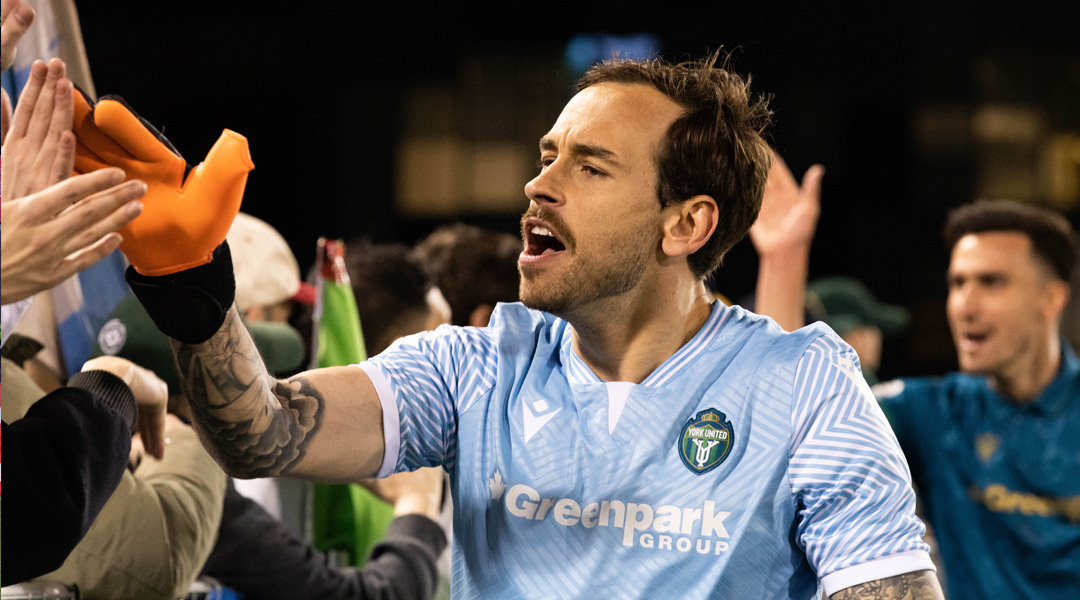 York United goalkeeper Niko Giantsopoulos will be joining the Vancouver Whitecaps on an emergency loan basis this weekend.

The 27-year-old goalkeeper just collected a clean sheet for York United against Pacific FC last night, but now finds himself travelling to join the ‘Caps in North Carolina ahead of their MLS tilt against Charlotte FC this Sunday.

After that, Niko’s short-term emergency loan will expire on Monday and he’ll rejoin York United ahead of the club’s second tilt against Pacific FC, this time in the Canadian Championship.

The emergency loan move came about quickly, with Giantsopoulos only finding out that it the move might be in the works just hours before yesterday’s match against the reigning CPL champions, where he went on to collect a clean a clean sheet.

“It can be tough to keep focused when you get that kind of news a couple hours before kickoff, but he’s got a great mentality,” said head coach Martin Nash, “He’s a great guy. He didn’t let his focus shift from our game tonight, and I thought he was brilliant: he commanded his box, claimed what he needed to claim, and was very good.”

This season has seen Giantsopoulos step into a starting role for York United, with the 27-year-old recording three clean sheets in eight starts for the Nine Stripes.

The Vancouver Whitecaps found themselves without any available goalkeepers after Thomas Hasal suffered a fracture finger, with both Isaac Boehmer and Cody Cropper placed on the league’s COVID-19 health and safety protocols.

This isn’t the first time the Vancouver Whitecaps have needed a domestic emergency loan for their goalkeepers, with Jonathan Sirois once joining the side for a one-match loan during the 2020’s bubble tournament.

Giantsopoulos has made seventeen appearances for his Canadian Premier League side since arriving from Cavalry FC last year. With Nathan Ingham joining Atletico Ottawa this year, the six-foot-tall goalkeeper has since stepped into a starting role.

The prior two years had seen his CPL career begin with ten appearances as a backup to Cavalry’s Marco Carducci, prior to which the Toronto native played in Australia: he featured for Devonport City, Broadmeadow Magic, and Launceston City, where some of his penalty antics turned into a viral video.

His short stint with the Vancouver Whitecaps will be his first experience at the MLS level, so it’ll be interesting to see if he has an opportunity to impress during the club’s away game to Charlotte FC.

That’s a lot of additional travel packed into the weekend, but Giantsopoulos didn’t appear too worried about it.

“It might be a factor, but I’m assuming with all the adrenaline going and how excited I am for the opportunity I’m not even gonna feel the tiredness,” he told media after the match.

The Canadian Premier League keeper will arrive alongside 17-year-old academy product Max Anchor as the two emergency options for Vancouver.

York United travelled to Langford this weekend with Niko Giantsopoulos and an emergency goalkeeper of their own in Gianluca Catalano, as Canada U-23 goalkeeper Matthew Nogueira is still sidelined in his first domestic season.