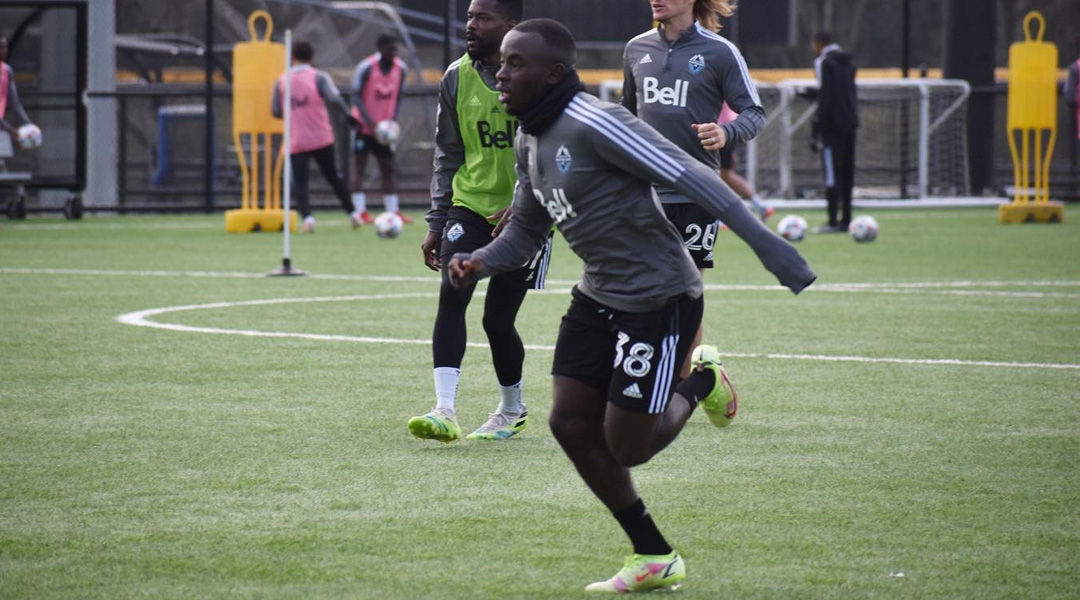 Three years after former NYCFC draft pick Kwame Awuah departed from the US top flight, he’s now on the precipice of securing a return to Major League Soccer heights with the Vancouver Whitecaps.

The 26-year-old had landed in the Canadian Premier League following his time in New York, where he established himself as a league-leading left-back at Forge FC. Kwame helped the hammers reach three consecutive league finals, securing back-to-back title wins in 2019 and 2020 with a run right up to a third CPL Final appearance last year.

The versatile left-back – who can also play more centrally, or further up the flank – has also gained plenty of experience in continental action over the past three seasons.

Forge FC reached progressively further stages in the Concacaf League each of its successive years, with the club reaching the semi-final stage in 2021 to qualify for Champions League heights – something even the Whitecaps haven’t done since 2017.

“I was able to experience a lot of games on Concacaf, a lot of championship games, so I think I know what it takes to win,” he told the Canadian Press, “and I think it can translate back to this level.”

Awuah had made eleven appearances for NYCFC after arriving as a first round draft pick from the University of Connecticut. The promising youngster had played alongside the likes of Cyle Larin and Richie Laryea in League1 Ontario before that, but arrived to New York as an athlete just learning the ropes of being a professional footballer.

“I took that experience into Forge and became a leader,” he reflects, “coming into the CPL, you didn’t know what to expect, but the last three years have probably been the best three years of my career.”

Awuah has made eighty appearances for the hammers across the last three seasons, contributing ten assists and scoring three goals. His most recent was a last-gasp equalizer against FC Motagua that kept the club undefeated at home in continental action.

His consistent performances in the CPL earned him the initiation to trial with Vancouver, where he now finds himself as one of seven unsigned trialists training out west. Head coach Vanni Sartini stated that none of the invitees have looked like ‘fish out of water’ thus far.

“They all looked sharp, and ready to be fighting for a spot,” he said.

Kwame’s latest CPL had been his best, with the full-back starting in almost every league match for the Hamilton-based side. He made the fourth-most passes into the box and the fifth-most passes in the attacking third on a league-wide scale, while defensively ranking top ten in both recovers and duals won.

He’s now tasked with pushing Cristian Gutierrez for the starting spot out on the left, an area where Vancouver is keen to have depth following his hamstring injury last season.

“We like to have a lot of young guys competing because a competition and getting challenged every single training to see your opponent, to see a good strong opponent there is also helpful to grow as a player,” explained Sartini, “we want to find out if Awuah can be that challenger for Guti so that at the end both players become a better player.”

Gutierrez had made 19 appearances last season, with his absence seeing a rotation of Jake Nerwinski, Andy Rose, Bruno Gaspar, and Patrick Metcalfe fill in for him – with the former three all having since departed. Awuah is keen to make good on the opportunity and launch himself back into MLS heights.

More promising words arrived from Whitecaps Sporting Director Axel Schuster, who backed Awuah as someone who fits well into the club’s system, especially given the way they deploy their wing backs and ask their central defenders to adapt, too. It’s a versatility that he says Kwame has.

“I knew this was a place I could take a step in the right direction to achieve my ambitions and help the team to achieve their goals as well,” Kwame added.

He isn’t the only trialist at the camp with Canadian Premier League experience, with Isaac Boehmer set to fight for a contract following the club’s decline of his existing option. The 20-year-old goalkeeper was loaned to Pacific FC midway through the last season, recording a sole appearance en route to the club’s North Star Shield win. With Thomas Hasal taking over as the new number one following Crepeau’s exit, the MLS side will be looking to bring in an additional keeper.

The Vancouver Whitecaps will continue camp at home until February 5, when the squad will travel to Southern California for a four-game preseason run before returning north of the border. If Kwame can secure himself an MLS contract, he might then travel back stateside to face the Columbus Crew at the end of the month before a potential home opener against his former side New York City FC.

“You have to earn your spot in the squad,” says Sartini, “and everyone can earn his spot in the squad. So every week will be like a competition to try and be in the starting eleven, to try to be even on the bench. I think everyone now has the opportunity to be on the team and be a protagonist.”