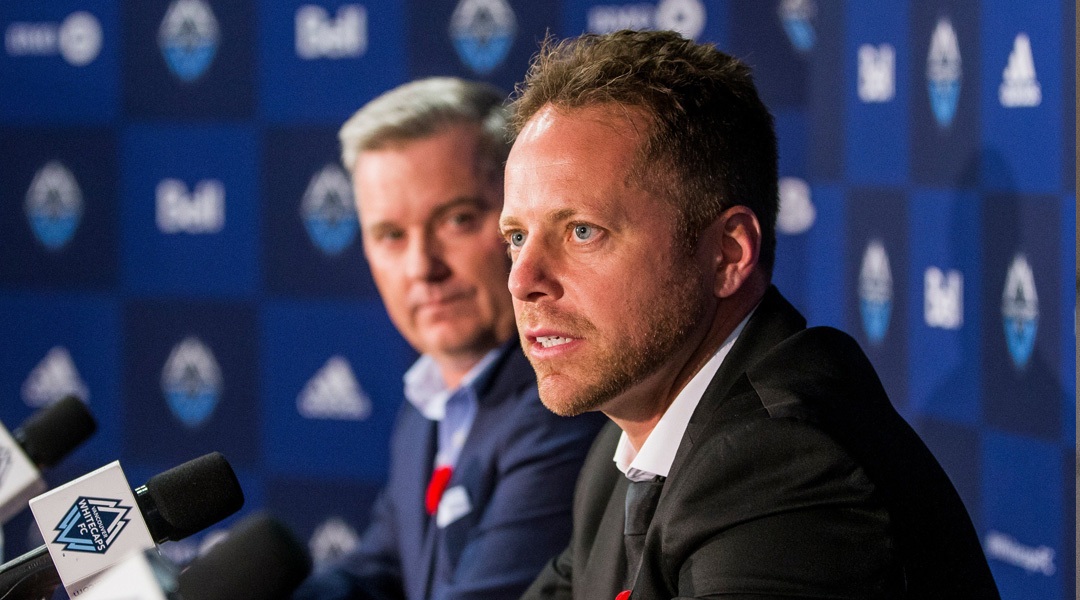 Dos Santos: ‘I Left The Whitecaps In A Very Good Place’

When former Vancouver Whitecaps head coach Marc Dos Santos was relieved of duties, the MLS side was eight games unbeaten, back at home after a prolonged period of playing in the United States, and had just added a big piece of a three-year roster rebuild in Ryan Gauld.

Dos Santos, 44, had coached the Major League Soccer side for two-and-a-half-years, through the arrival and lasting impact of the COVID-19 pandemic. His first task was to undergo a hefty squad rebuild that involved no less than sixteen players on a relatively shoestring budget by MLS standards. It was his first head coaching opportunity within the US top flight league.

With Marc Dos Santos now a month removed from the Whitecaps, the head coach is taking time to reflect on what worked and what didn’t during his tenure with a side that, he says, he has left in a good place for his successor Vanni Sartini.

I think that things were coming together, and the players too. That’s why I left the club in a very good place with the players. You never read about me having a bad relationship with them or the locker room being broken. No, it wasn’t the case, it was a loss that was hard for the ownership group, in my opinion. Because of that, someone had to pay the price, and that someone must always be the coach. Always. That’s the style of life that I chose. Was I expecting it? No. Did I accept it? Yes. It’s a part of the game, and I accept it. When I spoke with Axel, it was a very fast conversation. I accept it, and I was a man about it.

Dos Santos found himself relieved of duties just one day after falling to a 4-3 loss to Pacific FC in the Canadian Championship, where a fairly fragile Whitecaps defense found itself punished by a CPL team with nothing to lose.

He hadn’t been expecting this to be his final match, but holds little regrets barring the fact that he never got to enjoy the proverbial fruits following a rebuild period that was, due to COVID, done mostly on the road.

I left the Whitecaps on a run of eight games unbeaten, two wins in a row, and it’s definitely the loss in the cup game that was the falling for me. I felt I left at peace. I never had the chance to work with the full group. I left when Ryan Gauld had just arrived, and he’s a big difference maker. I left in a moment that I felt that the team was in a total different place than when I arrived in 2019.

The Whitecaps have recorded three wins, one draw, and one loss since that fateful Canadian Championship defeat, resting three points abreast of a playoff spot with a game in hand. In regular season action, the side has not qualified for a postseason berth since 2017, then under the guidance of former MLS player Carl Robinson.

Dos Santos had guided them to the Round of 16 at the MLS Is Back tournament last year, ultimately departing with a record of 22 wins, 20 draws, and 39 losses. Despite the club ranking as one of the lowest-spending teams in the league, he did succeed in a rebuild that, as things stand, appears to have the core blocks in place for a late playoff push.

The dirty work was done already, and now it’s the easy part. The 32 games in a row on the road are done. I think there were a lot of things in my first spell of MLS coaching that were very unrealistic. Changing sixteen players, COVID-19, playing 32 games in a row away from home, that is not normal. I am disappointed that I didn’t have the chance to coach the team in normal circumstances. That, I never did.

That being said, Marc says he’s grateful that he was tasked to coach in such a difficult period for the club. It was a learning experience that he’ll carry with him, and during his current downtime he’s studying what worked and what hadn’t. He’s also in the midst of securing his UEFA Pro License, considered to be the cream of the proverbial crop in terms of coaching accreditations.

The timing was great, and now I’m able to do it. It’s only one of three parts. I still have work to do, because it’s a demanding license to get. It’s good to be in the process of it. The first part of it was really good.

While his brother Phillip Dos Santos – who was also relieved of assistant coaching duties the same day Marc left – has moved quickly to secure the managerial post at Valour FC, Marc is in no rush. The first third of his invite-only coaching course was already completed in Northern Ireland, and he’s set to complete the the rest between Manchester and Switzerland over the next six months.

While he has some idea of where he’d like to land next (that’s another story entirely), he has picked up some valuable lessons from the world of Major League Soccer. If he were to go back and do it all over again, he says, perhaps he would not jump so quickly into a roster rebuild project that comes within a salary cap league.

It is very hard to improve a team in Major League Soccer when you have to change 16 players. It’s very, very hard. It’s not like in Europe or the NASL where you could do the moves right away. Here, you’re stuck with some contracts. There are things you can do and things you can’t because of the cap, and that part was really, really hard. When you don’t start well, the only thing that helps you are transfer windows, but they’re every six months. While you’re waiting to do the moves in that window, you’re playing with the roster that you have. That part I found very hard. If I could go back, I would not do that again.

The board had also given him clear instructions to build a young-leaning team so that the Whitecaps could develop and sell its domestic talent. With Alphonso Davies having turned heads, the Whitecaps set course to have the most Canadians in the national team by the 2026 World Cup.

Obviously, it’s always going to be difficult to secure results while playing and developing young talent amidst a roster overhaul (though York United fans may disagree). This youth-driven goal cost the Whitecaps rankings in the league table, he suggests.

I learned that you need players that have been there, who know the league, and have an age that can hold things together in difficult moments. The Whitecaps team that I have coached in two-and-a-half years is very young. It’s the younger in the MLS, it was still inexperienced in a lot of its players. Is that a good thing? Yes for development, but no for winning.

The Whitecaps had primarily relied on variations to 4-4-2 and 4-3-3 setups under Dos Santos, with roster adjustments and injuries sometimes seeing the club have selections headaches, and other times playing without any true strikers up top. Fans had a certain expectation of how Marc would play when he first arrived, though he stresses that a coach’s preferred playing style comes second to what works with the players already present in camp:

A coach has to adapt very well to the players that he has, because it’s dangerous for a coach to arrive in a club – and I’ve experienced that – and share his idea of playing philosophy. Then, people expect you to play in that philosophy, and it doesn’t work like that all the time. It’s one thing that I understood as a coach, the number one thing will always be the players.

Still, he’s adamant that after a few transfer windows the team is heading into a place where he always wanted them to go, equipped with all the right tools to make playoffs for the first time since 2017 – just that Dos Santos is no longer there to see it.

While his two-and-a-half seasons with the Vancouver Whitecaps didn’t result in any trophies, the 44-year-old still has a CV that could take him places: he’s won the USL and NASL, and has separately reached the finals of both those leagues too – prompting The Athletic to name him as the USL/NASL Coach of the Decade in 2020.

He was thrust into a Whitecaps setup with a lot to do and faced troubled waters reaching all the way back to his first year, so it was always going to be an uphill battle – a real Grouse Grind – that seemed stacked against the gaffer. His departure comes as a firm reminder that the world of sport will always be a results-based business.

His stint in Vancouver is in the past now, though. Whatever happens next, Dos Santos is grateful to have been trusted to lead the club through a time that would have been difficult even without a pandemic being thrown into the mix.

At the end of the day, becoming an MLS head coach was everything he had imagined it to be. Now he will look upwards yet again.

I also look at it like the opportunity that I had to be the coach of the club during its most difficult time, when it comes to the pandemic, playing away, and everything. That is a big blessing for me, to have had such an opportunity.

There will be more articles from our discussion with Marc Dos Santos set for the near future.