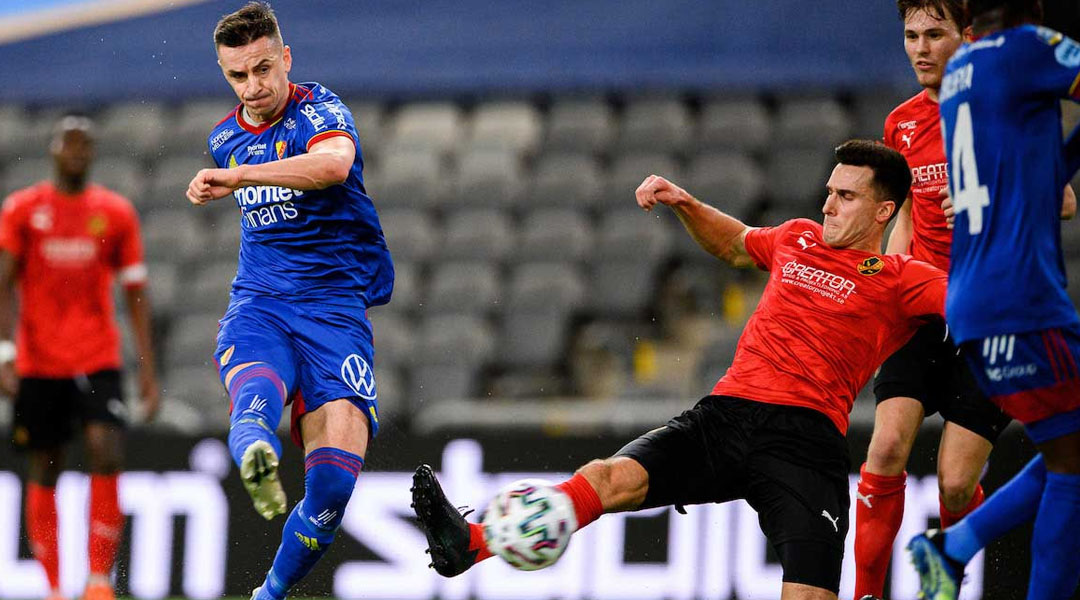 York United centre-back Dominick Zator made his debut for Swedish Superettan side Vasalunds IF today, with the on-loan defender helping the side come out with a 2-0 victory over Djurgardens IF in a preseason friendly at Tele2 Arena.

The club has effectively punched above their weight this preseason, dispatching top flight side AIK 2-0 last week before today’s repeat 2-0 performance against another club of larger stature – though Djurgardens had played a friendly match the day prior.

It took Vasalunds just four minutes to take the lead against the top flight team, with Swedish youngster Ibrahim El Mezouak taking advantage of a miss-struck back pass from Hjalmar Ekdal to coolly slot home an early lead and take the pressure of the club’s own back line.

Despite a lack of chances for the opposition, they did manage to strike the post with a powerful strike from Karl Holmberg, who was the top flight’s leading goalscorer in 2017 and earned a few caps with the Swedish national team as a result. In the fifty-forth minute, Vasalunds IF extended the lead to two-nil through a goal from Japanese defender Takuto Yasuoka, who found himself fouled in the box but still got back up in time to strike a wonderful half-volley.

After going up by two, Vasalunds IF made a significant number of substitutions which saw Djurgardens maintain a significant amount of possession. Still, the second half saw El Mezouak nearly score a brace, with the Vasalunds IF website reporting that the backline featuring Zator, Wistrom, and Hamza kept things stable and organized in order to keep a clean sheet throughout the match, leading to plaudits from head coach Dalibor Savic.

The guys’ defensive efforts today are one hundred percent, I’m very proud of it. I wish we had more ball possession, but we still meet Djurgarden, who are really good in their press game.

Overall, it appears Zator has had a good start to his time overseas with Vasalunds. The Calgarian defender stated that the ability for York United to secure an overseas loan move in the off-season was a big part of his decision to sign a two year deal with the side, with recent speculation from Duane Rollins suggesting that the Nine Stripes aren’t expecting Zator to ever suit up for his parent club, but rather be moved on for a profit beforehand – something that Club President Angus McNab publicly refuted.

Zator is expected to be called into action next weekend when Vasalunds IF takes on Superettan side AFC Eskilstuna in preseason action. The Stockholm-based side’s preseason campaign will run for eight more matches in all, with the Superettan season kicking off in early April and running straight through to a mid-season break in late June.

Assuming the Canadian Premier League season kicks off on the Victoria Day Long Weekend, the Nine Stripes will face an opening month of action without the likes of Zator, Petrasso, and Hamilton, who are all set to return to the side at the end of June following their respective overseas loans.

The Nine Stripes recently filled up its roster with the signing of former Pacific FC midfielder Noah Verhoeven, though the club’s two local CPL-U SPORTS Draft picks will be able to arrive on developmental contracts while some of the current roster remain out on loan.