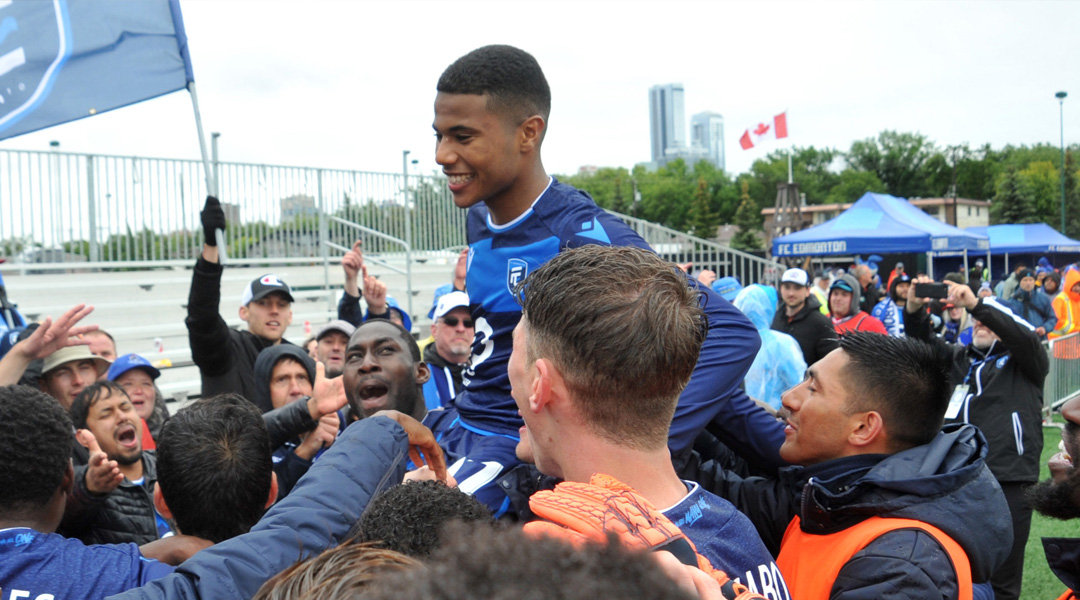 18-year-old FC Edmonton forward Marcus Velado-Tsegaye always knew football was the sport for him: born to an Ethiopian father and a Salvadoran mother, the beautiful game was a family affair from day one. Growing up in Edmonton, the youngster nurtured both his love for the game and his competitive talent through a variety of youth clubs before joining the FC Edmonton academy when he was 14.

Three years later, the Canadian Premier League launched and FC Edmonton head coach Jeff Paulus offered the youngster a chance to turn pro. Marcus had scholarship offers on the table, but as he tells Alberta-based journalist Thomas Nef, he says playing for FC Edmonton was the only real option when the gaffer’s offer came in.

It’s a really good experience for me, at such a young age, signing at 17. Signing a professional contract, you come into a new environment. You see how much more serious it is than playing at youth. Just a lot of things that I’ve learned over the past couple of months, and I’m still learning to this day.

The burgeoning league was made to help develop players just like Marcus: the Canadian Premier League requires that clubs field a Canadian-majority lineup at all times, with each of the seven inaugural CPL clubs being required to have three domestic U-21 players on each 23-man roster. These three players must play for 1,000 cumulative minutes each season. Throughout his first campaign as a professional, Marcus has collected 432 minutes of his own so far.

Having been part of the FC Academy for several years, Velado-Tsegaye has been on Canada Soccer’s radar for some time. He attended a youth talent identification camp held by Canada Soccer in 2015, and now that he’s getting professional minutes, he’s hoping that a call-up for the Canada U-20 side is on the cards ahead of the 2020 CONCACAF U-20 Championship, which will act as a qualifier for the 2021 FIFA U-21 World Cup.

After suiting up for FC Edmonton some fourteen times so far in his first professional season – and bagging a goal on his birthday against the Halifax Wanderers – Marcus is evidently hungry for more. The only time he’s played for a full ninety minutes was the aforementioned birthday match, and he’d like to get more starts like that.

My goal for next year is, of course you always want to get better as time goes on, every single day getting better, getting better. For next year, I really want to see myself more involved, getting more playing time, regular starter, which I believe I can do. It’s going to be a really important offseason for me so I can be ready for next season as well.

When the inaugural Canadian Premier League season concludes in just over a month, clubs will have a long five-month-long offseason to contend with before action resumes for 2020. Valour FC head coach Rob Gale says it’s going to be a massive problem for CPL clubs, many of which don’t have shiny, new indoor facilities for training during the Canadian winter. To that end, Pacific FC is building British Columbia’s largest field house in order to ensure the long offseason doesn’t detract too much from player fitness and training, though not every club will have such a luxury.


Whatever 2020 brings, it’s clear that 2019 has been a good year for Marcus Velado-Tsegaye. The 18-year-old year will likely take to the pitch for the Eddies again before the season is over, working towards his Canada U-20 callup and proving that he has what it takes as a professional.

As for beyond 2020? Like most players, Marcus dreams of being able to make the jump overseas and continuing his development in an place where it’s more of a lifestyle than a sport. That being said, he’d be keen on making the jump to Major League Soccer too, which would allow him to ply his trade a little closer to home.

Yeah, for sure. Making a move to Europe, South America, or even MLS is a dream of mine, for sure. I really want to focus on here, FC Edmonton, and performing here so I can reach those next levels by taking it one step at a time.

Of course, the Eddies youngster has a lot of work to put in before any potential European or MLS clubs come calling. Making the roster for the Canada U-20 squad would be a good start to making himself a known quantity, and to do that Velado-Tsegaye needs to keep earning minutes in the Canadian Premier League.


Without this platform, Velado-Tsegaye would be finishing his time at the academy as an 18-year-old with no immediate place to continue to his development. There are countless Canadian athletes that gave up on the pro game due to a simple lack of opportunities, so it’s great to see players like Marcus continue to develop straight out of the academy.

Whether this development results in a Canada U-20 callup or more minutes for the Eddies next year remains to be seen, but rest assured that Marcus is prepared to keep working in the offseason to tip the odds in his favour.