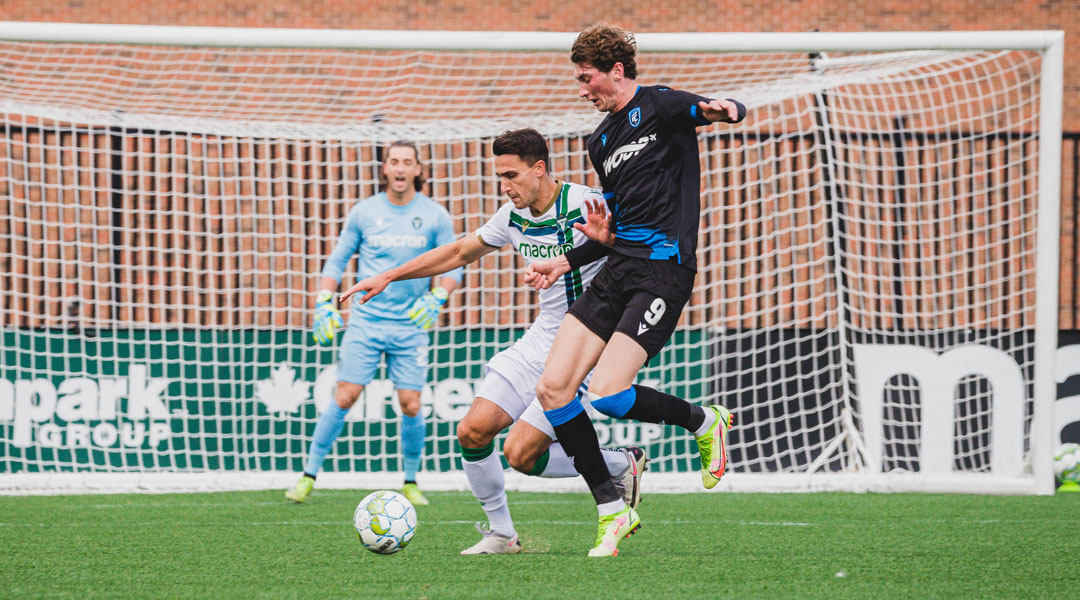 After weeks of training with Whitecaps FC 2, former Canadian Premier League star striker Easton Ongaro has officially signed with the MLS NEXT Pro side.

His arrival to the league comes after several stellar seasons in the CPL, with the 24-year-old most recently plying his trade in Europe with Romanian top flight side UTA Arad.

While hopes were high for his second European stint, injuries saw him ultimately leave the club this spring. After training with his former side FC Edmonton, the tied-for-top CPL goalscorer has now gone westwards to test himself in a direct pathway to Major League Soccer.

The late-blooming striker proved was an absolute phenom at the CPL level, tallying 25 goals and 5 assists in just 57 appearances for FC Edmonton before revealing to Northern Tribune that he was looking to test himself in Europe.

The Whitecaps had touched based with him around that time, with that early contact eventually paving way for today’s announcement.

“He proved himself as one of the best strikers in the Canadian Premier League, and he now wants to take the next step with the opportunity to continue pushing himself at our club,” said Whitecaps FC Sporting Director Axel Schuster of the move.

Despite departing from the Canadian Premier League last year, he still remains tied as the all-time top goalscorer in Canada’s top flight. Ongaro had also enjoyed a loan stint with Danish second division side Vendsyssel FF back in 2021, scoring two goals in eight appearances.

With the six-foot-six striker arguably haven proven equal to every level he’s found himself in so far, it’ll be interesting to see how he performs at the MLS NEXT Pro level.

The Whitecaps FC recently loaned former Pacific left-back Chris Lee to the first team, suggesting that there’s certainly opportunity for Ongaro to get a chance in the top US league.