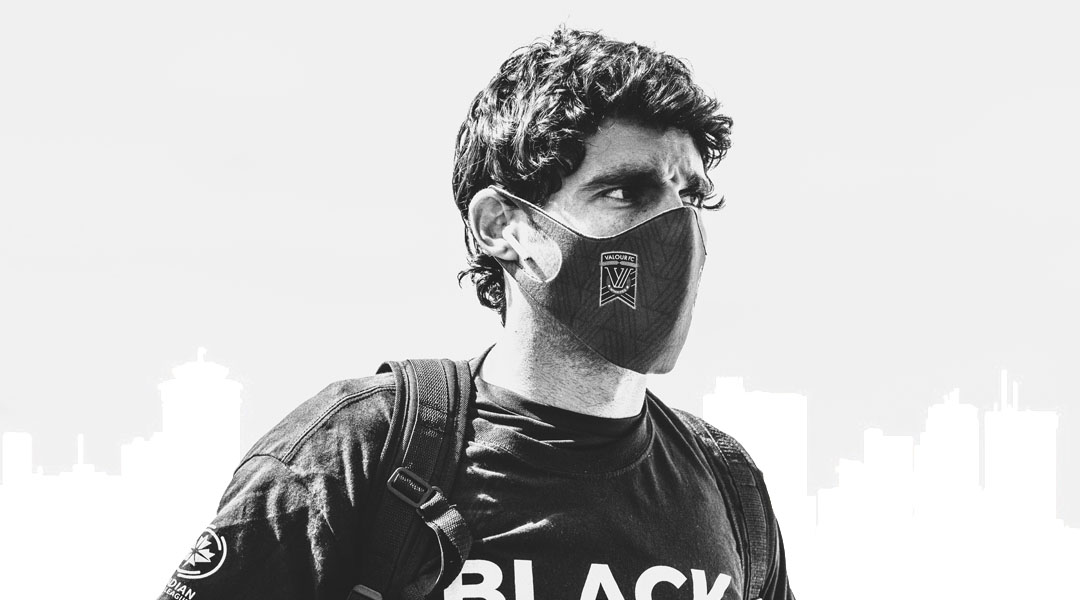 Valour FC fan-favourite Jose Galan calmed a lot of hearts yesterday when he clarified that he intends to return to the club following a stint with CP Villarrobledo, for whom he joined on a free transfer yesterday following the expiration of his contract with Valour FC.

Shortly after this move was made public, Galan got a lot of messages from members of the Canadian soccer community, prompting him to tweet a clarification stating that he plans to make a return to the Winnipeg-based side come March 2021.

While his return to Valour FC is only a verbal agreement for the moment, the plans are rock solid in terms of intent – in fact, his return to Canada is something that he negotiated into his contract with his new Segunda Division B side.

That’s why I signed for that team, because I got other offers in Kuwait, South Africa, different places, even in northern Spain, but this team allowed me to come back [to Canada]. Of course, I wanted to keep playing because the CPL season was very short. Also of course due to the weather here, for me to lose 6-8 months of competition is too much. I really wanted to go and to play, but of course they respect the fact that I want to come back next season. Normally it will be around April or the end of the April, and with this team they’re allowing me to play until the regular season finishes which is in twenty-first of March, which is perfect.

Far prior to the announcement, Jose had discussed this move with Rob Gale and the Valour FC technical staff, with the club agreeing that it was a good idea for him to stay fit and get competitive game time in during the prolonged offseason. They’ve made it clear that the club wants him back for the 2021 Canadian Premier League season, with Galan making it clear that he’s more than happy to come back, too.


The move means Jose is now the second Canadian Premier League athlete to secure off-season playtime with an overseas club, with York9 FC forward Nicholas Hamilton scheduled for a loan move to Dundee FC ahead of next year’s CPL season. As per Galan himself, fans should expect a lot more of these announcements to come in the near future.

Yes, actually I know the club is already working with some players to do kind of the same. Different leagues, different clubs in Europe.

A late March return from Spain means that CP Villarrobledo will lose out on Galan for part of the side’s regular season and the all-important playoff portion of the Segunda Division B. Still, returning in time for the start of the CPL season was a dealbreaker for Galan: after plying his trade for more than twenty clubs throughout his career, Winnipeg is home. He made those ambitions clear from the get-go, noting that his relationship with the community has only grown since that time.

Much like Italian striker Michele Paolucci, Galan was quick to point out the warm welcome from the community that provided the baseline for what grew into a strong bond: after a big welcome last year, Galan says he’s formed a strong bond with the Valour FC supporters who filled out The Trench last year.

They make me feel welcome, I know they love the way I play. I think I am very passionate in the field, and they feel that connection with me. With the people of Valour and my teammates, we are very happy.

As the squad’s most veteran player, Galan has found himself looking after some of the squad’s younger players and helping them both on and off the pitch. This season showed a Valour FC squad that exuded a strong sense of unity, with Galan clearly proud of how the locker atmosphere contributed to a much-improved campaign for the Winnipeg-based side:

I feel like they listen to me. During the tournament, and after it finished, they said that I really helped them with my  attitude in training everyday, or when I play, this is what I try to give to them from the experience that I have. For me, it’s the best thing – to be respected by your teammates, and your coaches. For me, this is the most grateful thing. To them, you feel that everything you are doing for so long, it makes sense. You feel the respect, you feel you are helping other players. For me, this is enough. When I heard some other teammates come to me and say I helped them, or that I am an example, for me there’s nothing like this. This is the best part of football.

After finishing seventh and fifth in the inaugural campaign’s spring and fall seasons, a much-improved Valour FC squad played well at The Island Games, coming one match away from securing itself a postseason berth. The club led the league in terms of domestic U-21 minutes, with a much-improved defense keeping the side in contention for games that one feels would have been clear losses last year.

The club also secured its biggest-ever win with a 4-0 routing of Atletico Ottawa, during which Galan scored his first goal for the club. He dedicated it to his daughter, who was born in Winnipeg this May.


While it remains unclear who will ultimately be back for the next season, Rob Gale stated earlier this week that he expects the majority of the roster to return, and commended the players of the squad for the strong bond they’d formed throughout a mentally-taxing bubble tournament in Charlottetown. It’s a sentiment that Galan was quick to echo:

I am blessed to have this opportunity. The atmosphere between all of us was amazing for the whole tournament. You know, you are almost forty days together every day for twenty four hours, and it was amazing. Our game plan was good, we were a little bit unlucky, but I feel like we can do better in terms of result. We are confident in the coaches and everybody in the city, in this group, if we keep it for next season.

Once Galan rejoins Valour FC next year, 2021 will mark his third season with the CPL side – the longest time he’s remained in one spot since his time with Almedia UD Almeria B some ten years ago. After having plied his trade for twenty clubs all over the globe, the 34-year-old is excited about what his long term future holds in Winnipeg, which has won over the veteran midfielder’s heart.

There are so many things here that we like. Sometimes, when I move that much in football from one country to another, I was seeking the perfect place. The mix between football and the lifestyle. Here, this is what we have and this is why I want to stay here.

Jose also says he’s happy with his teammates, and the fact that his wife has also settled well in the city. She’s advanced her own career in Winnipeg, with the couple also welcoming their daughter this May – which means Galan is the proud father of an out-and-out Winnipegger, with her Canadian passport just recently arriving home.

He’s also taken steps to become more involved in the community, coaching kids at the U-15 and U-14 levels. Having acquired a coaching license from Spain, he says he’s excited to train the next generation of talent in the Winnipeg area. He was genuinely impressed with the level of talent the kids exhibited, stating that in the two years since he arrived from Saudi Arabia he has witnessed good progress from the local youngsters.

Of course, the Canadian Premier League itself has grown by leaps and bounds, too: last year saw MLS opposition state that the quality was high, which came as no surprise to those who tuned in regularly. After this year’s Island Games competition was brought to many more eyes courtesy of key broadcast acquisitions, Galan says he’s fielded calls from curious players and coaches alike:

I think the football game here is improving a lot. I have friends and even coaches in Spain and Qatar, and the told me they were impressed at the level in the Canadian Premier League. It’s good, they liked the organization, it looks very good. Some players contacted me, and I showed them it was very nice in Canada, and with the league. With the World Cup coming also, I think it’s the perfect place to stay because I feel like the soccer is improving a lot.

Looking back on his time in the league so far, Galan says he’s very proud to have contributed to the Canadian Premier League’s first-ever season, and he’s happy with his performances in The Island Games which saw him depart with one goal, one assist, and two man of the match nominations. Beyond 2021, the Valour FC midfielder made it no secret that he hopes to stay in the league for many years to come, too.


Of course, one of the struggles in staying in the Canadian Premier League over the long-term is that it’s a salary cap league. That’s something Rob Gale lamented in an earlier interview with Ed Tait: he says that no player wants to stay on the same salary, with the club needing to remain acutely aware regarding the danger of overpaying for a player where a tight budget is a constant limiting factor.

Galan – who himself is a member of the Common Goal Initiative, which sees him donate 1% of his salary to charity – admits that he could be earning much more money in the likes of Qatar or Saudi Arabia, but says settling in Winnipeg has been about more than that. Even with the smaller wage structure of the CPL, he’s remained a committed member for the Common Goal movement:

It’s something that even if it’s not as much, it’s one percent at least, and we have to do something. We have the tool of football, as I said, and we know we have a community with Valour, so many good players in the club, the coach, and now a lot of players are starting to find out about this. I think as players, we have the skill to do that and it’s good for everyone. I always say to the players in the team, or anyone for whom I have the opportunity to say, that we should do something and I think Common Goal is the perfect thing which joins football and society. I’m very proud. I would say my best signing is with the team of Common Goal. I’m very proud to be part of the family and what they’re doing.

So far the only other CPLer to join the movement has been York9 FC full-back Morey Doner, who York9 FC have signed on to 2021 after his impressive performances in the inaugural season. If Galan’s words are any indication, however, there will likely be more Common Goal representatives in the Canadian Premier League in the years to come.

While Jose Galan is excited about the opportunity to play in Spain during the CPL offseason, it looks like he’s very committed about continuing his time with Valour FC next year. While yesterday’s news made it briefly appear like the Spanish midfielder was permanently departing, the full context shows that he hopes to be part of the Canadian football scene for years to come.