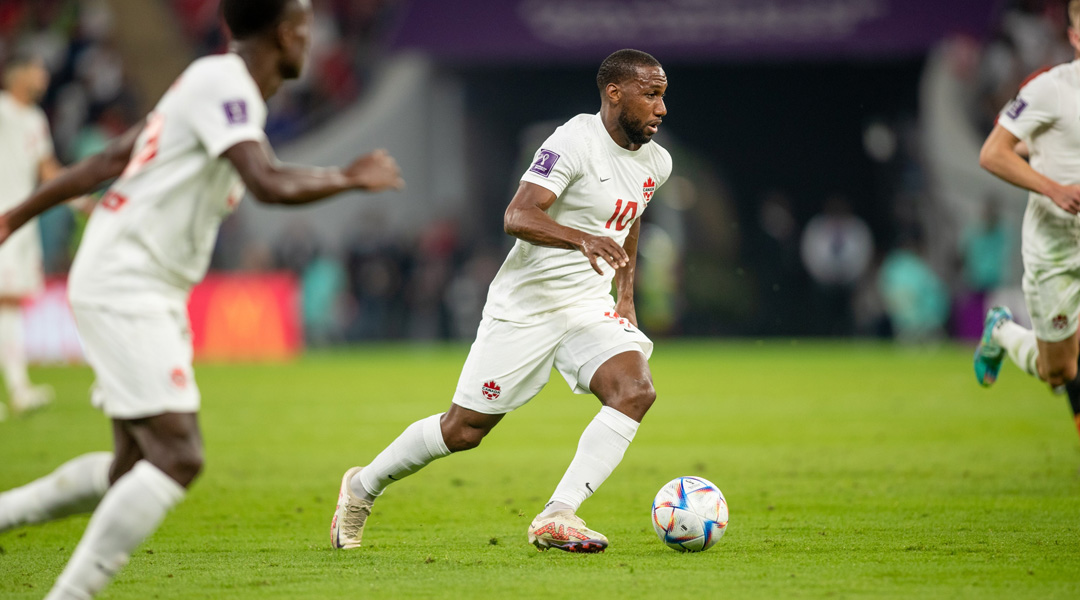 Canada’s first FIFA Men’s World Cup match in 36 years saw Les Rouges turn plenty of heads with a fearless and fluent attack, but it was favourites Belgium who collected all three points on the big night.

That leaves Canada bottom of Group F after the narrow 1-0 loss, which featured a missed penalty opportunity for Les Rouges. Still, the country is just one point behind Croatia and Morocco after those two fizzled out in a nil-nil draw earlier this morning.

Having stood toe-to-toe with Belgium today, Herdman’s ‘New Canada’ still has it all left to play for in highly problematic host country Qatar.

While Milan Borjan found himself tested early, it was Canada who came out guns blazing at Ahmed bin Ali Stadium today. An attack featuring the likes of Alphonso Davies, Jonathan David, and Tajon Buchanan put early pressure aplenty on Belgium’s backline, with Canada setting the tone for a physical, fast-paced match.

Canada’s first World Cup goal would have to wait, however, with Thibaut Courtois parrying away the ensuing penalty shot, and the rebound going high.

After a great bout of early pressure that saw Canada get the ball into Belgium’s box aplenty, a counter from the Red Devils had a push-forward Canadian line on the ropes – and if not for a stunning tackle from Kamal Miller, Les Rouges might have paid the price for being caught out.

Canada continued to probe from all areas of the pitch, with full-backs deploying themselves up the flank to support wave after wave of Canadian attacks. Belgium bent somewhat under the pressure, but they didn’t break.

Despite Canada heavily outshooting the favourites by a 3:1 ratio, Belgium sunk a dagger into Canadian hearts just minutes before half-time: a great aerial long ball caught the defenders out – as it had during Japan – with Michy Batshuayi slotting in to fire the Red Devils in front.

A nation’s breath came out in gasps with one of the last touches of the first half: Richie Laryea did a splintering run on the right flank to cross the ball in to Buchanan, but the Club Brugge forward fired high from close range.

The second half would feature similar near-misses for Les Rouges, with Lille striker Jonathan David heading wide early on, while another big defensive tackle – this time from Richie Laryea – stopped the Red Devils cold in a dangerous area.

Substitute Cyle Larin would later join a growing list of Canadian talent looked upward at the sky and pondering what if, with Courteous saving a close range header from him with ten minutes to go.

The substitutions began to flow as Herdman – who has never shied away from tactical alterations – began looking for a way to restore parity between the two sides. However, it wasn’t meant to be: Belgium held on to the one-nil lead for the duration, despite Canada outshooting them 21-9 and Les Rouges wrapping up with an expected goals of 2.61.

Canada will now need to shake off the opening defeat and prepare to face previous World Cup runners-up Croatia this Sunday, with the country’s first World Cup goal having been agonizingly just out of reach.