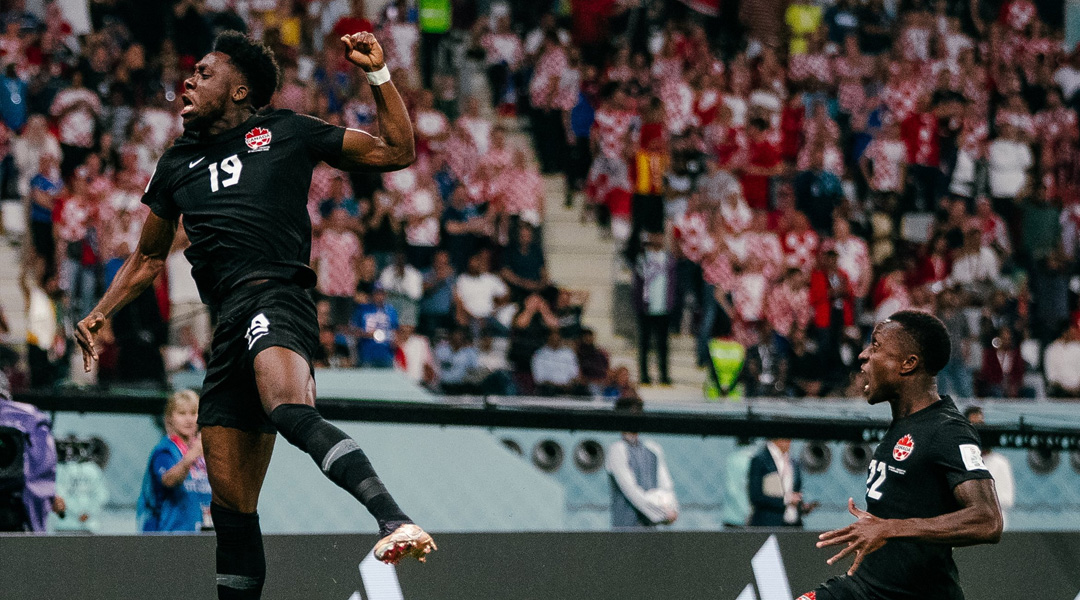 Canada’s star player Alphonso Davies made history for his country by becoming the first Canuck to score at the FIFA Men’s World Cup, but the underdog side couldn’t hold off Croatia from taking the match 4-1.

The result leaves Canada mathematically ruled out from advancing beyond the group stage, with Les Rouges having already lost to Belgium in an opener that turned plenty of heads, but provided no points for the second-time World Cup team.

John Herdman only made one change for the country’s crack against Croatia, with Cyle Larin replacing Junior Hoilett in the starting eleven while veteran leader Atiba Hutchison earned his hundredth cap.

Canada’s 1986 World Cup finished without the country scoring a goal, and after the slim 1-0 loss to Belgium last week there were thoughts that history might be repeating itself. It took Canada just two minutes to set the record straight, however, with Alphonso Davies unleashing a powerful header to put Les Rouges in front of the previous FIFA Men’s World Cup runners-up:

The Bayern Munich man firmly cements himself further into Canadian soccer history with the goal, which also takes pressure off him for last week’s missed penalty conversion opportunity against the Red Devils.

The strong start from Canada had Croatia spending the majority of the opening minutes in its own half, with a high press seeing Cyle Larin, Alphonso Davies, and Tajon Buchanan getting plenty of touches. A Davies through ball saw Larin free in the box, though this was called for offside. Larin found himself involved in plenty of the early buildup and sent a great ball into the box for Davies that, this time, the Canadian star couldn’t control.

There were some warning signs flashed, however, with Croatia capable of quickly transitioning on the counter – and while Canada was able to stop those efforts early on, there were a few occasions where Les Rouges whiffed some clearance opportunities and had to endure sustained pressure as a result.

Those warning signs hit a peak level in the 25th minute when another Croatian counter saw Kovacic provide an exceptional ball from space in the middle of the park which was able to be slotted beyond Borjan, though the would-be equalizer was called back for Kovacic having been offside in the buildup.

Canadian goalkeeper Milan Borjan came up big to stop a close-range effort from Livaja in the 35th, with the ensuing corner once again seeing Canada fail to fully clear the opportunity. This allowed Croatia to probe quickly, with a beautiful through ball to Kramaric seeing the forward run in on the left and, with a deft touch, carefully slot the ball beyond Borjan and into the side netting.

The Canadians had struggled to close out the first half against Belgium, and history repeated itself in Khalifa International Stadium today. It was heartbreak for Les Rouges as a sharp Croatia counter saw Livaja snipe in a well-placed shot to make it 2-1 just before the break.

The second half saw Jonathan Osorio come on for Larin, with the out-of-contract Toronto FC midfielder coming inches away from procuring an equalizer in the 49th minute.

The match nearly went 3-1 after a brilliant run by Croatian centrepiece Luka Modric saw the previous runners-up loose a great shot, but six-foot-five Milan Borjan came up big to keep his country in the game.

It was Canada’s turn to probe next, with Osorio collecting on the wing and helping get a ball to Jonathan David, who forced a phenomenal fingertip save from Livakovic.

While the tempo lapsed for the next fifteen minutes or so, Croatia would pounce on an opportunity in the 70th minute: Perisic sent in a big aerial ball to Kramaric from the flank, with the forward taking touch in the box before firing his country into a 3-1 lead.

The Croatian side would keep up pressure aplenty to close out the match, with a few yellow cards being issued as tempers began to flare. Moments after substitute Junior Hoilett nearly clawed a goal back in added time, however, a defensive miscue from Kamal Miller would see a two-on-one situation unfold for Croatia, allowing them to bag a fourth goal to wrap up the match.

Canada will close out its Group F action against Morocco this Thursday, but today’s result means Canada will not be advancing beyond the group stage in the country’s first Men’s World Cup since 1986.

Despite suffering a killing blow against Croatia tonight, John Herdman’s side has turned heads on a global scale, proving that Canada belongs on the sporting world’s biggest stage – one which it will help to host in 2026.