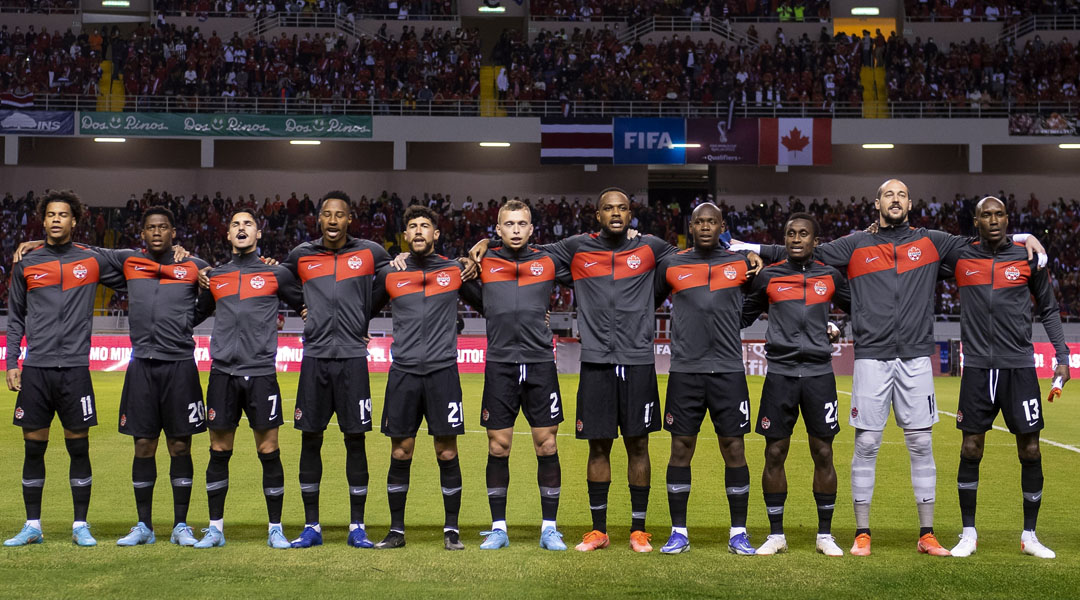 Canada will need to wait just a little longer for its World Cup qualification hopes to come to fruition.

The Canadian men’s national team could have secured the feat with a win against Costa Rica tonight, but a 1-0 away loss means that Les Rouges will need to wait until its home match against Jamaica this Sunday to end a 36 year wait for World Cup qualification.

Still, there’s a lot of positives to take from a match which saw a ten-man Canadian side absolutely dominate the hosts, being denied by the post twice.

The opening half saw several players take to the floor, but the dramatics that highlighted the opening 45 would be foreshadowed when midfielder Mark-Anthony Kaye picked up an early yellow following a high studs-up challenge. When VAR came into play, many thought the yellow would turn to red, though the original decision was upheld to see Kaye earn a caution instead.

The Canadians struggled to break free of the high press deployed on by Costa Rica, though Nottingham Forest man Richie Laryea provided some of the country’s rare counter-attacking moments in the first half as his pace saw him push down the left flank. He loosed a right-footed curler that appeared to have Navas beat on the far post, though the ball sailed high.

The tide would shift against Canada after Mark-Anthony Kaye allowed his frustrations to get to him after being on the receiving end of numerous challenges, with Johan Venegas receiving a hard shoulder and making the most of it to see Kaye collect a second yellow.

Things almost went from bad to worse moments later as Milan Borjan – who has had a sturdy and stellar qualification campaign behind the defensive line – idled on the ball a little too long, with Costa Rican forward Anthony Contreras nearly breaking the deadlock after blocking a kick from the keeper.

Costa Rica continued to earn set pieces to break up the pace of the match, and this strategy would see the hosts break the deadlock just before the first half came to a close:

Celso Borges’ twenty-fifth international goal for Costa Rica would see the hosts finish the first half ahead, with a frustrating opening 45 for Canada coming to a close. By the halfway mark, the side was trailing a team for the first time since October, and it was a man down to boot.

The second half was nary a few minutes underway when Club Brugge youngster Tajon Buchanan forced Navas into a sharp leg save, with a follow-up effort moments later seeing the Canadian fire wide.

Costa Rican forward Joel Campbell earned a breakaway minutes later, with Borjan staying on his line and a 39-year-old Atiba Hutchinson doing just enough to put the Monterrey man off his game at the last moment.

The end-to-end action continued when a dazzling turn from Jonathan David allowed the ‘ice man’ to fire a quick shot that looked to have Navas beat before a last-gasp block stopped the shot.

Canada continued to finds its footing as the second half progressed, with Costa Rica forced to drop deeper into its own half and ease off of the high press which saw them frustrate Canada in the first half.

Another Canadian counter saw Stephen Eustaquio break between two defenders to fire in a tight-angled right footer that beat Navas but went just outside the far post.

Canada looked certain to score after flashy footwork from Junior Hoilett saw Laryea fire a nutmeg shot to force Navas into a quick save, with the rebound seeing Buchanan hit the post with a header before a scissor-kick attempt went high.

Fate was tempted but unmoved two minutes from time, with Jonathan David firing a close-range header that pinged right off the far post and cleared away. “It’s coming,” urged commentator Terry Dunfield, but it wasn’t meant to be tonight.

The visitors will take solace in the fact that they dominated the second half despite being a man down, though the 1-0 loss means the 36 year wait for World Cup qualification will last at least a few days longer.

Canada will now have a chance to bounce back against Jamaica this Sunday. This marks the country’s first loss in the third and final qualifying round, and their ability to bounce back will go a long way in showing their resolve around a trip to Qatar that is still, despite today’s result, ultimately expected.

The current international break will see Canada play home to Jamaica on Sunday before travelling to face Panama away next Wednesday.