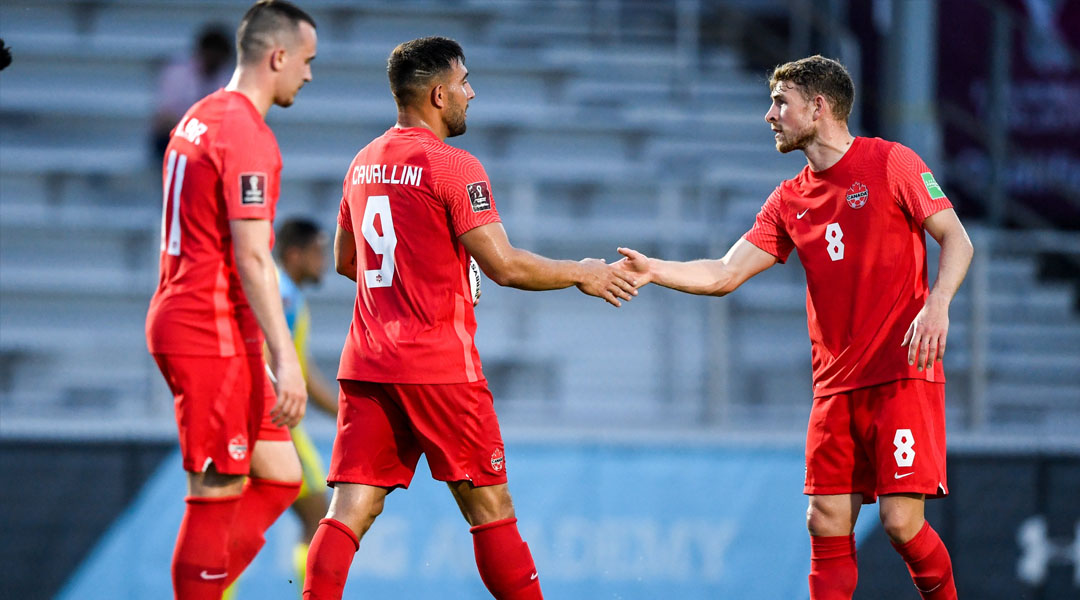 The Canadian national team recorded a comfortable victory over Aruba tonight to leave itself top of its World Cup Qualifying group ahead of a deciding match against Suriname next week.

All-told, Herdman had a fairly rotated squad given who all was called up for the Canadian national team for the World Cup Qualifying matches.

Canada opened up the scoring in the seventeenth minute with a goal from Lucas Cavalani, who topped off a wonderful cross from Mark-Anthony Kaye to give Les Rouges an all-important lead in Group B of World Cup Qualifying action.

It was just two minutes later when a shot from Liam Millar cannoned off the outstretched arms of an Aruban defender to give Canada the opportunity to double its lead in the nineteenth minute, with captain Junior Hoilett picking the bottom right corner to double Canada’s lead.

Buchanan, who scored a brace in the first match of Canada’s Olympic Qualifiers for the U-23 side, did most of the work just before the second half whistle, picking out Lucas Cavallini for a tap-in to allow Canada to finish the first half with a three-goal cushion.

The introduction of the second half saw John Herdman bring on Wolverhampton Wanderers youngster Theo Corbeanu to replace Liam Millar.

Substitute Zachary Brault-Guillard made his presence felt within 5 minutes of the seconds half’s kickoff, spinning into space in the right half of the box to fire home a right-footed effort beyond Aruban goalkeeper Eric Abdul.

Canada continued to control the match as the second half wore on, with Bundesliga champion Alphonso Davies coming on in the 66th minute beside Ligue 1 champion Jonathan David.

The duo combined to make the score 5-0 late in the second half, with David supplying Davies on the left side of the box. Quick on his feet, the 20-year-old fired a shot across the box that rocketed off the defender and into the net.

Substitute striker Cyle Larin – also a league champion with Besitkas – continued his hot form with a calm finish within the box to complete a second assist from Jonathan Davies.

The pain wasn’t over for Aruba, with Jonathan David not satisfied with just assists: the ice man completed the rout for Canada, completing a clinical left-footed finish to score another goal for Les Rouges.

The final whistle would arrive with Canada recording a comfortable 7-0 win over Aruba in tonight’s World Cup Qualifying match.

Canada will close out its group action against Suriname in Chicago on Tuesday, June 8, with the victor of the clash set to ultimately top the group and continue its World Cup Qualifying campaign. A draw would also see Canada progress to the next stage.