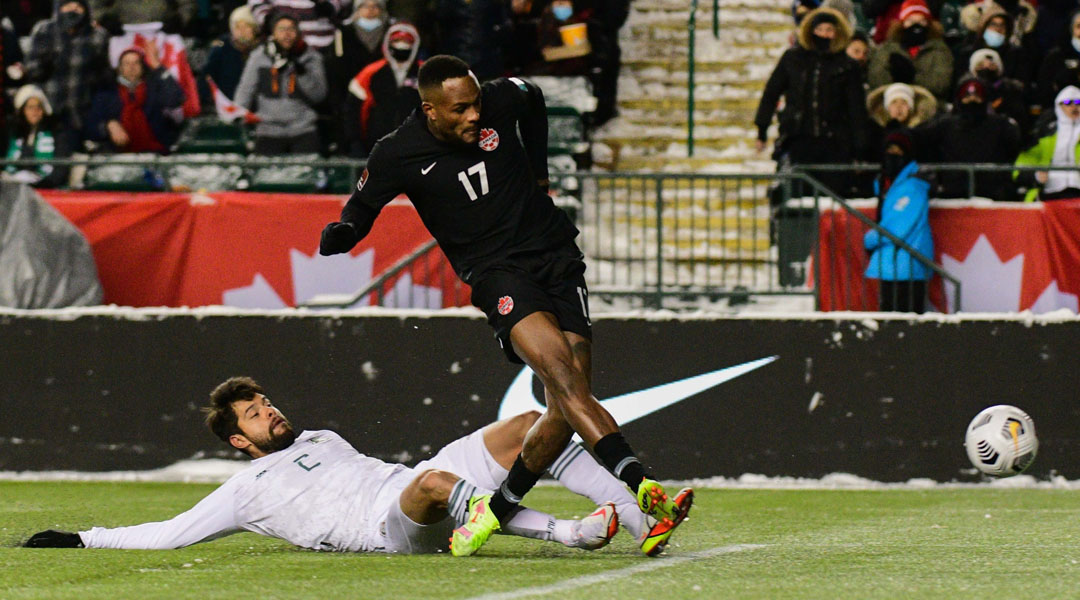 Canada is undefeated and top in the third and final Concacaf World Cup Qualifying round after securing an impressive 2-1 win over Mexico at Edmonton’s Commonwealth Stadium.

A frigid, snowy morning gave way to a frosty evening of football in Alberta, with the Canadian national team executing a sturdy game plan that saw El Tri struggle on a cold turf pitch in below-zero weather. Goals on either half from Besiktas JK forward Cyle Larin proved the difference tonight, with a last-gasp comeback effort from Mexico proving to be too little, too late.

In the end, Canada earned a historic win over a Mexican side they ought to have beat in the Azteca, though the end of the second half proved to be a wild ride for a side no longer incapable of outperforming the traditional giants of Conacacaf.

The first half of the match would see a cold, chippy affair unfold for both teams, with the match being anything but fluid: each play seemed to be separated by a whistle as the wintry turf pitch slowed down a game with plenty of aggressive posturing. This led to Doniel Henry picking up an early yellow, with John Herdman opting to replace him with Steven Vitoria in the 38th minute.

Canada made good one of the few chances of the first half, with Alistair Johnston finding himself in space and – sensing momentum behind a screamer – firing a long range belter that caught Ochoa off-guard. The veteran goalkeeper spilled the ball out to his left, with Cyle Larin beating the Mexican defense to the ball in order to fire home the go-ahead goal for Les Rouges:

Mexico would finish the first half without a shot at all, with Canada’s first half efforts having resulted in three shots on target. As a result, Mexico head coach Tata Martino would make two changes at half-time in the hopes of sparking something going forward.

With Buchanan and Davies finding themselves in a two-on-one situation in the 49th minute, fans would have been hoping to see the home team double its lead on the counter before the opportunity unexpectedly fizzled out after a miss-queued pass.

Fans wouldn’t be have to wait long to sing again, however, with Eustaquio floating in a wonderful freekick in the 52nd minute that saw Cyle Larin lose his defenders with a sharp run, with the forward then shifting the ball home with a right-footed close volley.

With the brace now wrapped for Larin – who now sits as the joint top goalscorer for Canada at 22, tying him with Dwayne De Rosario – the pressure was all on El Tri to bring some heat.

With the match approaching the third quarter mark, Richie Laryea cut inside the Mexico box before being taken down by Sanchez. The home crowd roared for a penalty, though the referee made the right call and kept play going.

Mexico nearly pulled one back 25 minutes from time, with substitute Jesus Corona sending in a quick ball that saw an awkward shot safely stopped by Borjan. He’d stifle out another dangerous cross three minutes of time, too.

Runs from Alphonso Davies and Richie Laryea would nearly catch the El Tri defense off-balance as the match wore on, with Larin then being replaced by the ever-dangerous Jonathan David in the 73rd minute.

With Mexico mounting several crosses from the right flank as the second half wore on, Corona would make one count as he floated in a high one for Hector Herrera to power to the far right corner.

Mexico continued an late game onslaught that saw the side come inches from securing a shock equalizer in the fourth of five minutes of added time, with Borjan coming up big to keep all three points wrapped for Les Rouges.

At the end, it was a well-deserved win for a Canadian side that, ultimately, executed a team performance to near-perfection tonight under John Herdman.

With eight games now played in a group of just as many teams, Canada remains the only undefeated of them. Les Rouges now rise to the top of a group featuring Concacaf powerhouses like Mexico, USA, Panama, and Costa Rica.

With the power dynamic in the footballing confederation clearly shifting, it’ll be up to John Herdman and his squad to keep the momentum going and, as is fast becoming a very reachable reality, securing a berth to the 2022 World Cup.