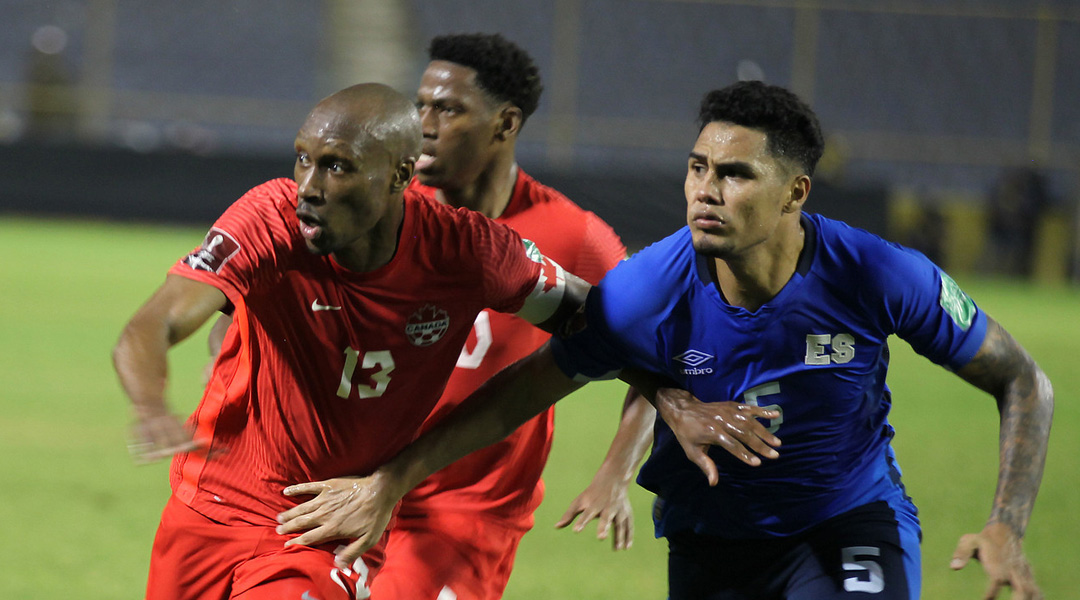 Canada has closed out the final match of the current international window with a 2-0 win over El Salvador.

The result sees Les Rouges remain top of the table and undefeated in the final round of Concacaf World Cup Qualifying, placing the Canadians tantalizingly on the precipice of their first World Cup qualification since 1986.

A second half goal from Canadian Captain Atiba Hutchinson – secured in quite some fashion – made the difference in a match that seemed otherwise destined to be a draw, with Jonathan David scoring a trademark counter-attacking goal in added time.

The first half saw a cagey performances from both sides, with some early temperament from both teams seeing a physical game unfold on the pitch. Jonathan David had the sharpest chance in the opening twenty, with Salvadorian goalkeeper Kevin Carabantes smothering up the opportunity.

Stephen Eustaquio then marked his return with a sneaky freekick effort in the 21st minute, though Carabantes tipped it over the post. Hoilett would force him to tip out another set piece effort a few minutes later, with Les Rouges mounting pressure on the hosts. The first half would see Doneil Henry booked, meaning he’ll miss the match against Costa Rica in March.

The hosts started to find their footing as the first half closed out, through Milan Borjan wouldn’t be called into action before the first forty-five came to a close.

The second half got off to an uneventful start with neither side conceding much ground, prompting Herdman to spark a change by bringing in the trio of Tajon Buchanan, Cyle Larin, and Alistair Johnston – the latter of whom entered today as Canada’s minutes leader in the current campaign.

El Salvador had a decent penalty shout in the 62nd minute after an attack probed well into the Canadian box, with Buchanan tracking back and getting the ball through some contact. Les Rouges then pounced on the counter, though the box-to-box action ended without a shot at either end.

The breakthrough would come in bizarre fashion after a strong run from Cyle Larin saw the forward cross the ball in from the right flank for Hutchinson to muscle his way onto the end of it. His diving header went off the post, off of Eriq Zavaleta, and right off of Atiba Hutchinson’s back before an acute-angled bounce put the reds in front:

Milan Borjan would unexpectedly get called into action twice in added time, the first instance of which came comfortably and the second of which would see Borjan pull off a superb save from what would have been a tremendous equalizer.

Then – just like against they did against the US – Canada loosed itself a breakaway the end of the match, with Jonathan David closing in solo on Carabantes to chip the goalkeeper and see Canada win by a multi-goal result. It was his second chip goal of the window.

The country secures its sixth win in a row to remain top of the table with the most goals scored and least goals conceded. The other matches of the window saw Canada beat Honduras away before securing a 2-0 win over the USA in Hamilton.

Canada has three matches remaining in its group, though those won’t be played until March. The country is all-but-certain to lock in a qualifying spot for the 2022 World Cup, with the rising reds reaping the rewards from a tight brotherhood and a now-trademark tenacity ushered in by head coach John Herdman.