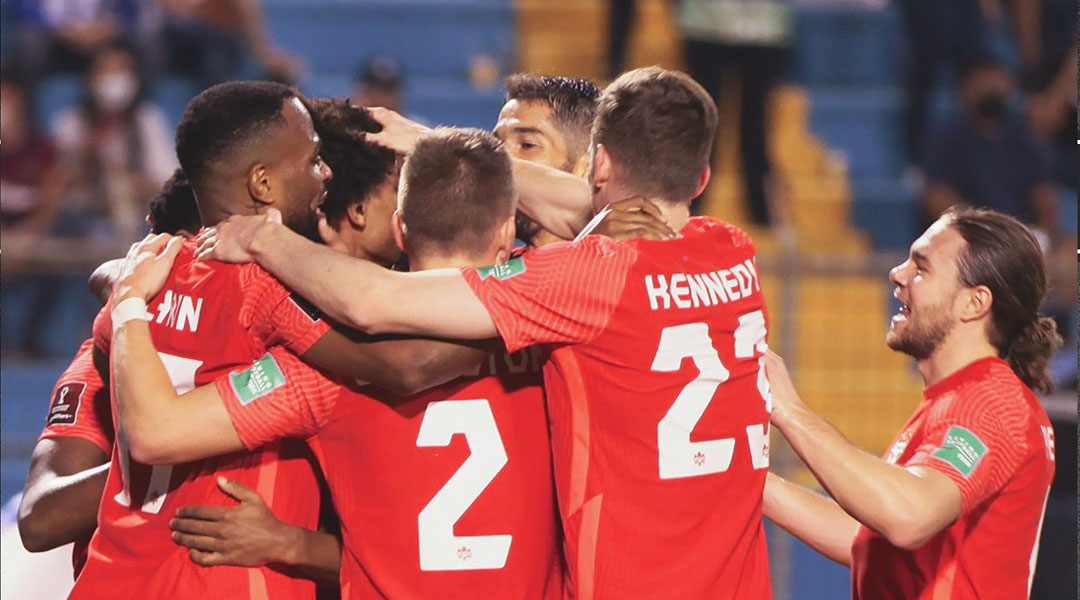 Top-of-the-table Canada entered tonight’s World Cup Qualifier as a firm favourite over last-placed Honduras, with Les Rouges duly delivering on a new set of expectations at the Estadio Olimpico Metropolitano.

The match – which saw TSN release a promotion detailing the country’s hard 8-1 defeat to Honduras back in 2012 – comes as a highlight to how far the national team program has come in the time since.

Goals from Tajon Buchanan and Jonathan David saw Canada open its January window with a big three points, with Les Rouges still remaining undefeated in the third and final round of Concacaf World Cup Qualifiers to remain top in group standings.

With both Stephen Eustaquio and Alphonso Davies unable to feature for the 94th-ranked country, Canada opened the match with a slight air of uncertainty before taking control of the first half.

Tajon Buchanan had been tasked with stepping up in the absence of Alphonso Davies, and the Club Brugge man duly delivered just ten minutes in: gaining possession on the right line, he danced his way into the box before firing an absolute blast that was knocked into the net by Honduran defender Denil Maldonado.

Momentum seemed to shift in Canada’s favour after that, with Canada carving out a two-on-one situation not longer after, though the pass couldn’t cut beyond the defender.

CF Montreal’s Samuel Piette was enjoying a fine start despite the MLS season having been wrapped in November, but the midfielder took a hard challenge and had to be replaced by Liam Fraser – a change which impacted the flow of the game for the visitors.

With Honduras starting to probe, Milan Borjan kept things steady to see out the first half by coming up to the top of the box and putting in a two-handed clearance to mitigate a dangerous move from Los Catrachos.

The first half saw Honduras limited to five shots without any on target, with some testy challenging beginning to make way on the pitch.

Lille star Jonathan David found himself in a one-on-one situation early into the second half, but the ice man left his touch a little light as he went to slot the ball beyond Luis Lopez.

Not long after that, Jonathan Osorio and Richie Laryea came on to replace Junior Hoilett and Cyle Larin, with the defensive-minded change from Herdman seeing Canada keep ample bodies behind the ball.

Honduras still seemed likely to equalize as a thunderous header flew towards the back right of the net, but Borjan came up with an absolutely phenomenal save to keep Les Rouges in front with the 34-year-old somehow reaching the ball to tip it out wide.

The hosts kept mounting pressure, with Canada keeping nearly the entire squad at the box – but that didn’t stop Fraser from pinging a pinpoint aerial ball for David, who caught out two Honduran defenders to fire in a half-volleyed chip and make it 2-0:

It wasn’t all smooth sailing after that, however, with Alberth Elis sneaking in a ball over Borjan that went off the post. Out of all the Honduran forwards, he’d been the biggest troublemaker for the Canadian defense.

Borjan would deny the Honduran forward in the third minute of extra time, too, helping himself to a clean sheet as Canada secured a sharp 2-0 win away against Honduras.

The result, all told, is a far cry what fans would have expected just ten years ago. This time around, they entered as favourites and delivered Canada to its first away win in Honduras since 1985.

Former national team member Julian de Guzman had described the country’s 8-1 loss to Honduras in 2012 as one of the darkest days of his life. In the here and now, Canada – so chronically often underestimated – has instead provided a bright spark.

Tonight’s 2-0 win shows that this is is a different team, with a different tone. The players on the pitch now find themselves on the precipice of Canada’s first World Cup appearance since 1986, and it’s hard to say they don’t deserve it.

With five games left in the qualifiers, however, there’s no time to wax nostalgic or let the foot off the pedal. Canada goes again in three days time against a side they drew at last contest.

Canada will now host the United States in Hamilton on Sunday before closing out the international window against El Salvador on February 2.