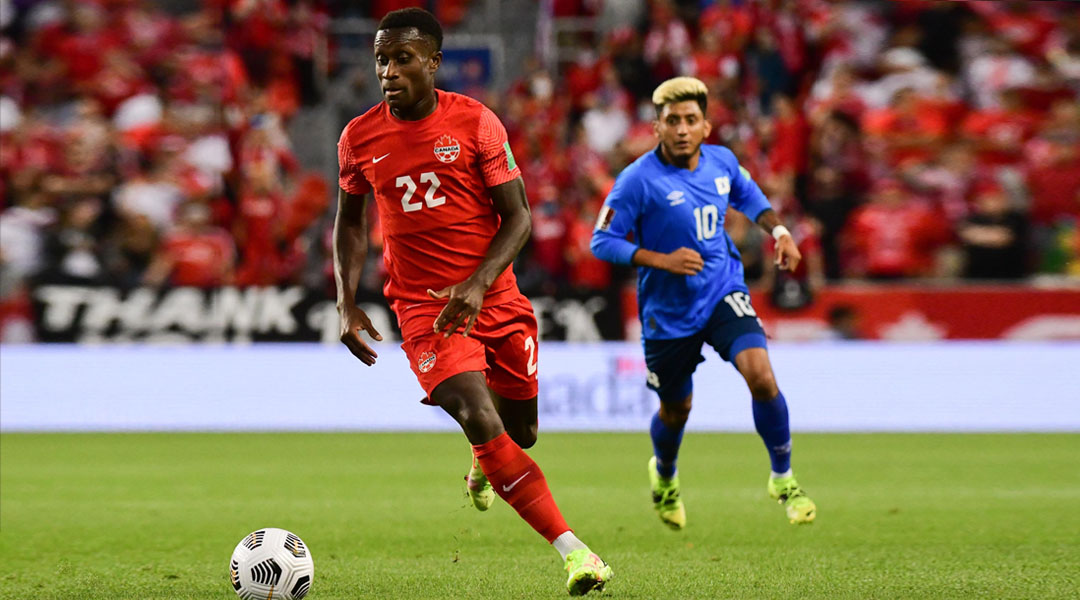 Canada surged to an energetic 3-0 win over El Salvador to score a big three points in the Concacaf Final Qualifying Round for the 2022 World Cup.

An early double salvo from Les Rouges saw La Selecta firmly on the back foot from the get-go, with the second half seeing rising youngster Tajon Buchanan bag a third for Les Rouges in what was described as a ‘must-win’ match.

It’s a statement result from the side, especially given that they had to play without national talisman Alphonso Davies.

Canada’s opening three matches have now seen the side collect five of a possible nine points, with five goals for and two against. El Salvador, meanwhile, rests at two points after securing draws against the USA and Honduras ahead of tonight’s defeat.

While El Salvador tried to slow down the match in the opening minutes, Canada drew the team out and were quick to counter when Jonathan Osorio gained possession in the sixth minute. A TFC link-up would see Richie Laryea fire down the left flank, with the full-back sending in a quick ball that national team veteran Atiba Hutchinson converted from the near-post:

New Club Brugge signing Tajon Buchanan quickly found himself on the receiving end of several fouls, with tempers boiling over after he received a stomp in the eleventh minute.

The resulting freekick from Hoilett was won by Steven Vitoria, who’s lofted pass across the box was quickly fired back in by Buchanan. Lille striker Jonathan David rose to meet the ball with a tight-angled header to double the lead for Les Rouges, who found themselves 2-0 after just eleven minutes.

The goal becomes David’s 16th in just 19 matches for Canada, and his first of the final qualifying round.

Canada continued to close down El Salvador quickly in midfield, putting the visitors under plenty of pressure as the match continued at a high tempo. Buchanan, who took two knocks before appearing to take a knee to the face, would be penalized with a yellow for pushing one of the offenders as a result.

El Salvador’s Alexander Larin would collect a yellow for repetitive fouling in the thirty-third minute, but would find himself lucky not to pick up second after digging his studs into Buchanan from behind during an aerial challenge a few minutes later.

El Salvador’s best chance of the first half would see Enrico Hernandez receive a quick lead ball on a rare counter, though his shot was well-blocked by Vitoria. The defender would come up clutch three minutes later, slowing down another counter after a slip in possession from Kamal Miller.

Buchanan, who had suffered persistent several fouls throughout the night, would bag a goal of his own in the 59th minute after a giveaway from Eriq Zavaleta saw a two-on-one opportunity develop, with Jonathan David playing in the young forward:

El Salvador were unlucky not to score in the 66th minute, with Rivas missing a close-range opportunity before Richie Laryea came up big to clear a potential follow-up effort that would have put La Selection right back into the match.

Herdman would then give 38-year-old veteran Atiba Hutchinson a rest, with Mark-Anthony Kaye coming on to replace him in the 70th. A flurry of changes would follow, with David Wotherspoon, Samuel Piette, and a recovered Lucas Cavallini all coming on to see out the final quarter of the game.

Some nice build-up play from Canada would see Samuel Adekugbe feed in Richie Laryea five minutes from time, with the full-back finding himself with enough space o fire off a shot and force Martinez into a save.

The final whistle confirmed a big 3-0 win for Canada, who remain undefeated in the final stage of World Cup Qualifying action with Milan Borjan collecting his first clean sheet of the Concacaf final qualifying stage.

The result will give Canada confidence as it heads into a crucial string of matches next month, with Les Rouges playing away to Mexico and Jamaica before returning home to host Panama.

Mexico and Panama are the two sides that sit either side of Canada in the 14-match group stage, so points against them will go a long way in securing the country’s first World Cup appearance since 1986.