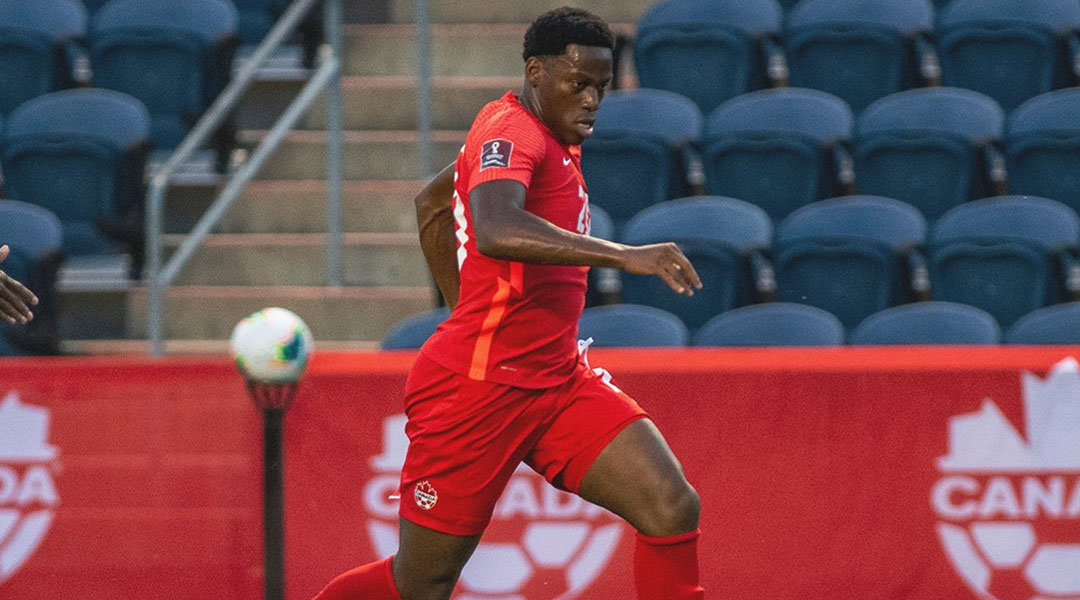 Canada’s road to the 2022 World Cup is set to continue following a 4-0 victory over Suriname tonight in Chicago.

The victory wraps up the first round group stage action that kicked off in March and saw Canada defeat Bermuda, the Cayman Islands, Aruba, and now Suriname to keep the country afloat of its increasing expectations.

The country entered the game top of the group courtesy of a comfortable 7-0 win over Aruba last Saturday, with Les Rouges entering the match level on points with Suriname but with seven more goals to its name – a win or a draw would see them through.

Herdman elected to start with a back three featuring first-timer Scott Kennedy, Doneil Henry, and Alistair Johnston up ahead of team captain Milan Borjan, with wing-backs Alphonso Davies and Richie Laryea complimenting a midfield of Jonathan Osorio, Samuel Piette, and Stephen Eustaquio. With Jonathan David and Cyle Larin up top, the 3-5-2 contained a balance of heavy-hitting players with a bit of positional experimentation from Herdman.

While the first half would be a game of fine margins, the second half saw the proverbial floodgates open in favour of the home side, with Alphonso Davies and Jonathan David putting in massive shifts for Les Rouges.

Still, it was Suriname who provided the first heart-stopping moment of the match when Union Berlin winger Sheraldo Becker struck the crossbar in the twelfth minute, with Canadian bodies flying around the box in an effort to block a follow up effort.

Suriname kept up sustained pressure, accumulating a handful of corner kicks that were sure to have made fans of Les Rouges nervous – it’s clear that the smallest independent South American country was not to be overlooked.

The seventeenth minute saw Jonathan David make a smart run to find himself open within the box after a great pass from Johnston, with David firing a low effort that Surinamese goalkeeper Warner Hahne blocked with his boot. The ball flew out to Richie Laryea, who attempted a long range effort that Hahne deflected off the post.

The first yellow card went Suriname’s way after Feyenoord left-back Ridgeciano Haps went in late on Laryea outside the box during another Canadian counter, with a freekick from Davies not finding any Canadian heads moments later.

Canada starting to accumulate a lead in terms of shots as the first half wore on, though Suriname proved fit competition for a Canadian side with mounting pressure on their backs as the clock ticked on.

It was none other than Bayern Munich’s Alphonso Davies who broke the deadlock, running in from the left flank to fire a quick shot between the legs of Hahne to put Canada in front – though he took a solid clock to the head in the process.

The referee had a decision to make a few minutes later when Haps brought down Laryea a second time in the forty-fourth minute, though a second yellow card wasn’t to come for the Surinamese left-back.

The second half got off to a much open start, with some back-and-forth action indicative of a match on the precipice of opening up.

Canada nearly doubled its lead when Hahne unexpectedly spilled an effort in the fifty-second minute, allowing Larin a half-chance to spin and fire off a point blank shot – though Suriname escaped the incident unscathed.

Canada continued its second-half pressure with Davies putting pressure on the left flank, firing off a shot at a tight angle – in similar fashion to his goal against Aruba – before nearly outpacing the defender to his own rebound.

Davies would turn supplier in the fifty-ninth minute to provide a leading pass to Jonathan David, with the Ligue 1 champion completing a smart run to fire a one-time effort beyond the keeper to double Canada’s lead.

Now trailing 2-0, Suriname made three changes at once in an effort to turn the tide of a match opening up in Canada’s favour.

Herdman would then make his first changes in the 66th minute, bringing off Jonathan Osorio and Cyle Larin and replacing the duo with Mark-Anthony Kaye and Lucas Cavallini.

Moments after, go-ahead goalscorer Davies would find himself earn Canada’s only yellow card of the match.

Suriname fans will have had their heads held in their hands in the seventieth minute, with a fast counter catching Canada off-guard before a great cross to Mitchell te Vrede saw him fire a half-volley off target from just a few feet out.

The Ice Man then secured his brace in the seventy-second minute, with Davies making space to find David in the middle of the box, with the striker coolly looping the ball home to make it 3-0.

The pain didn’t stop for Suriname as Canada continued to find gaps, with David nearly scoring a repeat goal moments later and Mark-Anthony Kaye seeing Cavallini through in the seventy-fifth. He was brought down by the keeper, with Jonathan David stepping up to convert the penalty, secure his second international hat trick, and score his fifteenth goal in just fourteen appearances for Canada.

With the result now more or less secured, Herdman protected some key assets by substituting off David, Davies, and Laryea, with Adekugbe, Wotherspoon, and Buchanan coming on to see out the match.

The closing minutes saw Cavallini run into the box unmarked, running inches ahead of a pass from Mark-Anthony Kaye and hitting his close-range effort high as a result.

With Canada officially topping the group, Les Rouges now advance to the second round to face Haiti over a two leg affair, with those matches taking place on June 12 and June 15 respectively. Herdman described the match as one the team has been waiting two years for, with Haiti having knocked Canada out of the 2019 Gold Cup.

The winner of the second round will proceed to the third and final CONCACAF World Cup Qualification round (the expanded version of the infamous and oft-illusive Hex), which features an eight team group where the top three qualify directly for the 2022 World Cup and the fourth-placed team will go to an intra-confederation playoff.

With a professional performance seeing Canada edge the match in the first half before exploding in the second, it’ll be interesting to see how high Canada can rise – especially when propelled by the likes of Jonathan David and Alphonso Davies.